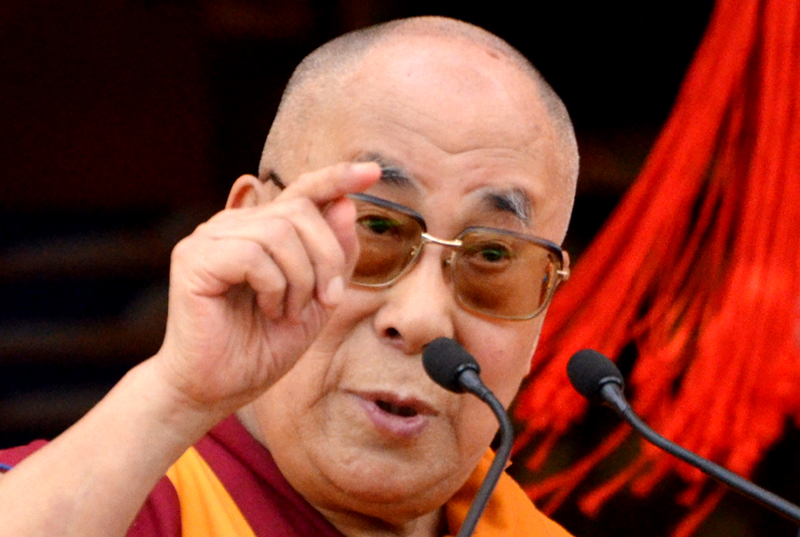 Bylakuppe, Mysore, Karnataka — His Holiness the Dalai completed the Sixteen Drops of Kadam empowerment over a two day period at Tashi Lhunpo Monastery. Thousands of people who attended the Lamrim teachings have remained in the area, receiving the Sixteen Drops. The same number are expected to return tomorrow for the concluding ceremonies which will include the White Tara and Long Life Offering ceremonies.

The air was cool and crisp as His Holiness explained the context of the teaching.

"Ngok Lepai Sherap, Dromtönpa and Atisha were on Mount Lhari in Yerpa. Ngok, noting that Drom always adopted a humble demeanour, asked Atisha to tell them about his previous lives. Drom protested that there was little to be gained from hearing about how he'd been spinning through the cycle of existence. Ngok took off his hat and said, 'Look, I've become bald and grey, at this stage, please don't stop the Master from answering my request.' As Atisha began to tell the tale, he and Drom were filled with inspiration. In their elation, Drom vanished and they beheld a vision involving the sixteen drops."

His Holiness said that for several generations the teaching remained secret. Phu-chungwa became the holder of the lineage and he explicitly passed it on. He added that since it was particularly related to Tibet, it would be good to begin with a recitation of the Words of Truth.

"The empowerment comes from a pure vision. There is a way in the Nyingma tradition of referring to the distant teachings that originate with the Buddha, closer teachings derived from treasures and profound teachings from pure visions. Dromtönpa and his disciples upheld the teachings common to the Great and Fundamental vehicles, teachings belonging to both the lineage of extensive conduct and the lineage of profound wisdom. Some people like to speak of a blessing lineage, but what is there other than the above mentioned lineages? Perhaps we can say there are instructions generally accessible to everyone and others suited to specific individuals or groups.

"Those who follow the 'Lamp of the Path' are those who integrate the practices relevant to the persons of the three capacities, the three trainings of morality, concentration and wisdom contained in the three scriptural collections of discipline, knowledge and wisdom."

His Holiness mentioned that he would give the bodhisattva vow, but, because the empowerment was being openly webcast he would not give the tantric vows on this occasion. He clarified that he had been asked if it was possible to receive an empowerment broadcast over the internet and his reply was that it should be possible if people's motivation was good and they could follow the visualizations. He said he'd reflected that since it is possible to take ordination by letter, it should be possible to receive a webcast empowerment.

He mentioned that he had received the empowerment from Kyabje Trijang Rinpoche, who had undertaken a special retreat in order to give it. His Holiness said that he too had undertaken the necessary retreat. He had nurtured the hope that when he first came to give the empowerment himself he would be able to offer it to Trijang Rinpoche's reincarnation. For this reason, although Geshe Tsultim Gyeltsen in Los Angeles had repeatedly requested him to give it, he had asked him to wait. In the end the occasion did not occur and he has since given it at Gyumey Tantric College and Thekchen Chöling in Dharamsala.

The Abbot of Drepung Loseling Monastery offered the mandala and representations of the body, speech and mind of enlightenment.

His Holiness explained that it is customary for the master giving the empowerment to recite the self-exhortation composed by Dromtönpa called 'Tree of Faith', which reveals the entire range of the path. He said that since copies had been printed and distributed, including a translation into English, everyone could recite it together. That done, he gave the bodhisattva vow. He then began over the course of two days the empowerment of the Sixteen Drops

In connection with the drop relating to Green Tara, he mentioned her special connection to the people of Tibet and that Gyalwa Gendun Drup, the First Dalai Lama, had composed a praise to her which ends:

May we always remember our previous lives and
Never be separated from the thought of enlightenment.
May we persevere firmly as a river flows
In following the vast ways of all Bodhisattvas.

Never hoping to benefit ourselves alone,
We vow to engage in the Great Way solely for others
And pursue the attainments that actually benefit,
Such as mystic vision, clairvoyance, patience and skill.

May we never be faint in furthering through infinite fields
The holy teachings of the Victorious Ones;
And in order constantly to fulfil the needs of beings,
May we quickly and easily gain the stage of the Buddha.

His Holiness then addressed the crowd for several minutes taking the opportunity to both thank those in attendance and offer advice as to their practice of the Dharma. His Holiness encouraged all to not just have faith in Buddhism, but to engage in the study of the Dharma.

He said that Buddhism is alive in the 21st century and will be alive in the 22nd and beyond. His Holiness emphasized that "faith alone is not enough," the Dharma texts have been translated into a multitude of language making them very accessible to Everyone today. He stressed that it is incumbent on the practitioners to maintain and enhance their practice so that they may be even more intelligent and continue in their growth process.

"1959 we came to India, we have been here a long time," His Holiness went on to say. He also said that's the 2016 Kalachakra had to be cancelled because of medical issues. He went on to announce that the Kalachakra will occur in Bodhgaya in the 11th month of the Tibetan of new year which means January 2017. This announcement was met with thunderous applause from the gathering of monks, nuns, and lay people from all over the world.

The practice of the 16 Drops can be found in the Book of Kadam, in a portion which is known as The Father Teachings. This book begins in chapter 1 with a string of salutations to the masters of the three principal lineages—the profound view of emptiness stemming from Mañjus?ri? and Na?ga?rjuna, the vast practices stemming from Maitreya and Asan?ga, and the inspirational blessings stemming from Vajradhara and Saraha—up to the key teachers of Atis?a. In chapter 2, Atis?a then specifies his preferred divinities in the context of the second recollection—recalling one's body as divinities—and makes the well-known selection of Buddha, Acala, Avalokites?vara, and Ta?ra? as the four gods of Kadam. At one point in the text, in the course of conversations between Atis?a and Dromtönpa on the four divinities, Dromtönpa's heart opens up and miraculously reveals progressively the entire realm of the Buddha S?a?kyamuni, the realm of Avalokites?vara, the realm of Ta?ra?, and finally the realm of Acala. It is here that we also find explicit mention of Avalokites?vara's famous six-syllable mantra, om? man?i padme hu?m?.

This deity yoga, in its developed form, came to be referred to as the practice of the sixteen drops, which is explained in some detail in Khenchen Nyima Gyaltsen's Elucidation of the Heart-Drop Practice.

The idea of the sixteen-drops practice is fairly straightforward. Like a powerful camera lens zooming from the widest possible angle to a progressively smaller focus and, finally, to a tiny point, the meditation becomes increasingly focused, moving from the entire cosmos to this world in particular, to the realm of Tibet, to the practitioner's own dwelling, and finally culminating within your own body. Within your body, you then visualize inside your heart the Perfection of Wisdom Mother, within whose heart is her son, Buddha S?a?kyamuni. Within the Buddha's heart is Great Compassion Avalokites?vara, within whose heart is Ta?ra?, and so on, continuing with wrathful Ta?ra?, Acala, Atis?a, and Dromtönpa. Within Dromtönpa's heart you then visualize Maitreya surrounded by the masters of the lineage of vast practice. In his heart you visualize Na?ga?rjuna surrounded by the masters of the lineage of profound view; and within his heart you visualize Vajradhara surrounded by the masters of the lineage of inspirational practice.

Finally, inside Vajradhara's heart, you visualize yourself as a buddha, embodying all three buddha bodies, and within your heart is a white drop the size of a mustard seed. This seed increases in size and turns into a vast radiant jewel container at the center of which your mind is imagined as a yellow drop the size of a pea. This, in turn, increases in size and turns into an ocean of drops the color of refined gold; the ocean is transparent, smooth, resolute, vast, and pervasive, and it reflects all forms. You then rest your mind, without wavering, upon this drop of great awakening, fused, and free of any sense of subject-object duality.