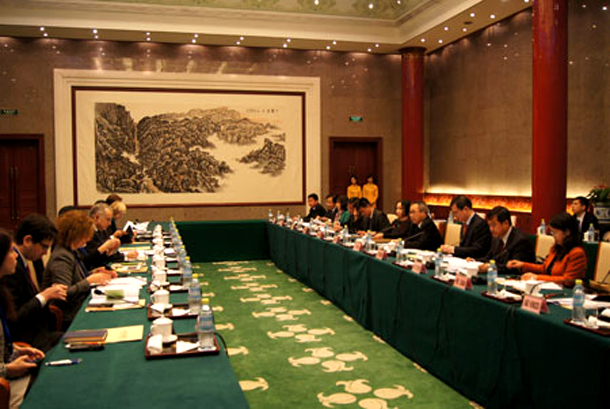 "Both sides consider human rights to be an important part of their bilateral relations, as recognised in the Joint Statement adopted during the 2015 EU-China Summit," said a press statement released on December 2, 2015, by the EU delegation following the meetings.

The Summit "celebrated the 40th anniversary of EU-China diplomatic relations. For the past 20 years, human rights dialogues have provided an opportunity for the EU and China to engage in in-depth discussions on human rights," the EU statement said, adding that the "dialogue allowed the two sides to have a detailed exchange of views on a wide range of human rights issues."

'The EU raised, in particular, concerns about recent developments in China, such as pending legislation on national security issues and the right to adequate housing and reform of the Hukou system,' it added.

The EU also raised "the rights of persons belonging to minorities, especially in Tibet and Xinjiang, freedom of religion or belief, off-line and on-line freedom of expression, freedom of peaceful assembly and association, the due process of law, arbitrary detention, torture and the death penalty."

It said that the "EU also articulated its concern at the ongoing detention of a number of human rights lawyers and activists who were arrested in July and August 2015. "

"Furthermore, some 20 individual cases were raised in the context of the discussion about China's human rights situation to illustrate EU concerns, including those of Liu Xiaobo, Ilham Tohti, Hada, Pu Zhiqiang, Xu Zhiyong, Gao Zhisheng, Wang Yu and her son, Bao Zhuoxuan," said the statement.

The exchange about recent developments in the European Union began with an introduction on the 2014 European Commission report on the implementation of the EU Charter of Fundamental Rights.

The EU delegation said that "the Chinese side raised the issues of migrants' protection, xenophobia and religious discrimination in the EU. Cooperation in international fora and the implementation of recommendations from international bodies, in particular those made during China's recent review by the Committee Against Torture, were also raised."

"Two further issues specific to this dialogue were discussed, namely the social integration of migrant workers in China and refugees and asylum-seekers in Europe and, secondly, environmental protection and human rights, with a special emphasis on the role of civil society organisations, the importance of freedom of expression and unimpeded access to information," the statement added.

Beijing also claimed that China "asked the EU side to fully and objectively look at China's achievements in human rights and conduct human rights exchanges with China on the basis of equality and mutual respect."

The delegation of the European Union was led by Mr Ugo Astuto, Acting Managing Director for Asia and the Pacific in the European External Action Service.

The Chinese delegation was led by Mr Li Junhua, Director-General for International Organisations and Conferences, Ministry of Foreign Affairs of the People's Republic of China.

Just a few days after the dialogue in Beijing, Chinese authorities have jailed two Tibetan monks from Kirti monastery in Ngaba County of Tibet, for staging peaceful protests, both of which involved raising the banned portrait of His Holiness the Dalai Lama.

A court in Sichuan province sentenced Gedhun Phuntsok, 18, to four years in prison, while Lobsang Kalsang, 19, to three years and six months after it convicted them for peaceful protests against the Chinese regime in March this year.

In March 2008, Tibet witnessed a peaceful demonstrations in Tibetan capital Lhasa, which broke out in widespread protests all over Tibet- its biggest protest in 20 years. China responded to the unrest with a deadly military crackdown.

Human rights activists say China tramples on religious freedom and culture in Tibet, which it has ruled with an iron fist since Chinese troops invaded the region in 1949. The regime recently imposed severe restrictions on internet and phone connections throughout Tibet in a greater attempt to prevent information reaching the outside world.