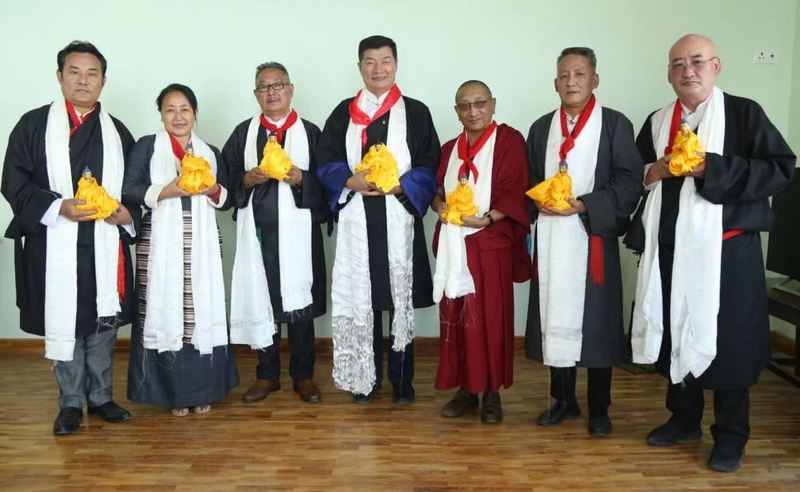 Dharamshala, India — His Holiness the Dalai Lama, the spiritual leader of Tibet, has highly praised former President Dr Lobsang Sangay and his cabinet ministers for their Contributions to the cause of Tibet and urged them to continue their service to the cause of freedom.

According to the spiritual leader of Tibet, former President Dr Sangay made a significant contribution to the Tibetan cause throughout ten years as President of the Central Tibetan Administration (CTA). Throughout a special virtual audience of 30 minutes, for the 20 minutes His Holiness spoke to Dr Sangay, former CTA President, on completion of his two five-year terms.

During the last ten minutes of interaction with the Kalons (ministers) of the 15th Kashag (cabinet), His Holiness expressed his gratitude to the outgoing Sikyong and ministers of the 15th Cabinet for their service, praising Dr Lobsang Sangay in particular for his commendable ten years of service to the cause of Tibet.

Nobel Peace Prize laureate remarked that Dr “Lobsang Sangay did commendable work throughout the last ten years,” and urged the outgoing Sikyong and Kalons to continue to serve the Tibetan cause. As the revival of ancient Indian wisdom remains one of His Holiness the Dalai Lama's four principal commitments, the spiritual leader remarked that he’s entrusted Dr Lobsang Sangay to take on more responsibility towards this endeavour.

He re-affirmed once again to live for more than 110 years with the hope and aspiration to serve the Tibetan interest, and humanity at large. “If I live long, it will be of benefit to the Tibetans inside and outside of Tibet.” Despite the physical constraints of travels, His Holiness promised to engage virtually from his residence in regards to giving teachings and talks.

His Holiness the Dalai Lama presented a statue of Buddha each to former Sikyong Dr Sangay and all cabinet ministers. Upon completion of his two-terms as Sikyong, Dr Sangay has been honored by various community organisations in recognition of his outstanding achievements in office and contributions to the cause of Tibet.