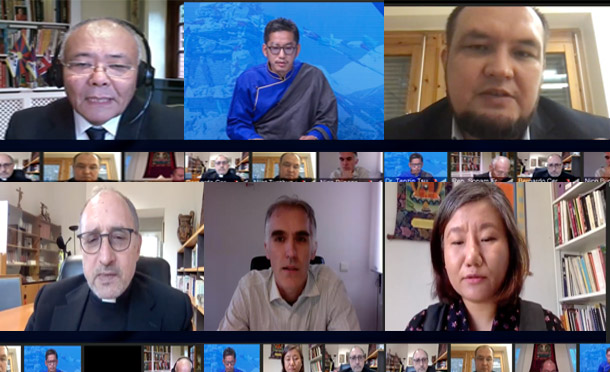 Dharamshala, India — The 3rd Geneva Forum 2020 took place online because of the Pandemic, on 10th November 2020. Through a brainstorming discussion on the topic, ‘China’s Policy on Freedom of Religion; Global Impact’. The panels highlight the Human Rights violations and deteriorating conditions of people under China.

Dr Lobsang Sangay, the political head of Central Tibetan Administration (CTA) incepts the discussion and launched, ‘Tibet was Never a Part of China but Middle Way Approach Remains a Viable Solution’ in the Czech language.

In a message, His Holiness 14th Dalai Lama pays his greetings to the panels of the Geneva forum and declares that the beneficial step for China is to follow the global norm of transparency and freedom and international communities should support China in becoming a nation that follows the rule of law and freedom of its people.

The partakers include Regula Rytz, Members of Swiss National Council, Senator Robert Rampi, Member of Italy Senate, Member of the House of Deputies, and Co-President of Czech Parliamentarian Support for Tibet, Frantisek Kopriva.

The keynote of the theme is to recognise and analyze the religious oppression carried in regions under the occupation of China, to highlight the global impact of the repressive policies of Communist China on religious freedom, and to find viable solutions to cease the interference of the Chinese government in the selection of religious figures and heads.

Sikyong condemns China for its lack of democracy and transparency which results in the global pandemic. Negligence from the Chinese government, because of which the whole world is paying a huge price for it, he further remarks. He sheds light on the Communist Party’s Document No 5 which states that recognition of religious figures should be accepted only after the registration and approval of the State Administration for Religious Affair.

Likewise, the agreement with the Vatican allowing China to appoint bishops in its country is encouraging China to further sinicize in the religious matters of other faiths, he reminds. This is shady and questionable and warns not to get involved with China, a government that has zero tolerance for religious freedom let alone empowering and embracing any religion. Portraying Tibet, as an example of China’s lack of religious freedom and basic Human Rights.

Michael Brand, Member of Bundestag, who is unable to be part of the panel due to the ongoing pandemic which required his full attention, extends his apology. He sends a resounding message to every free human to have consciousness of Tibet's cause and moral obligation to support for freedom of Tibetans.

President of the Austrian Association of Municipalities and Mayor of Grafenworth Alfred Rieldl conveys apology for his inability to be part of the discussion. While stating the similarity of community and religion in wanting to better the living standard of every living being.

The panel discussion comes to an end with a note of thanks by Thinlay Chukki, Moderator, and Special Appointee for Human Rights, Tibet Bureau Geneva.