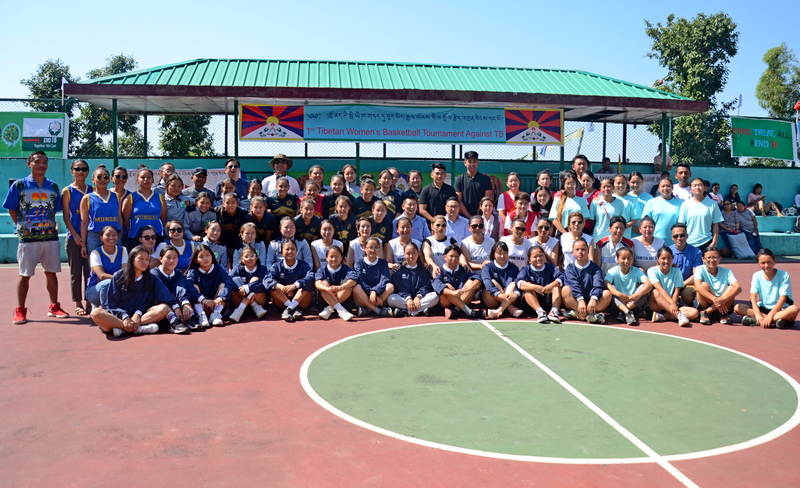 Participating teams and their coaches with the officials of Health Department of the CTA and Tibetan National Sports Association, at Gangchen Kyishong Basketball ground here in Dharamshala, India, June 2, 2019. Photo: TPI/Yangchen Dolma

Dharamshala — The Department of Health of the Central Tibetan Administration, in collaboration with Tibetan National Sports Association, organized the first Tibetan Women’s Basketball Tournament against Tuberculosis (TB) at Ghangkyi Basketball Ground on July 2, 2019. The event aims to prevent TB disease, plus raise awareness and advocate for efforts to eliminate TB.

The "1st Tibetan Women’s Basketball Tournament against Tuberculosis" (TB) funded by his Holiness the Dalai Lama Charitable Trust. There are 5 settlements participating; Nepal, Bylakuppe, Clementown (Dehradun), Bir, (Suja), and with a total of 7 teams. The tournament took place at the Ghangkyi basket ground on July 2nd and will conclude on July 6th on his Holiness the Dalai Lama’s Birthday.

Palden Dhondup, the secretary of the Department of Health stressed that Tuberculosis has been an ongoing problem in our community for many decades while speaking to members of the media in Dharamshala, India, on June 2, 2019.

Secretary Dhondup introduced and explained the aims and objectives of the tournament and emphasized on the theme “Against Tuberculosis” and elaborated on how this disease is prevalent in our society especially within the younger group of age. "Zero TB has been an aim to eradicate TB in our community since 2017and the plan is to have Zero TB 2025," he added.