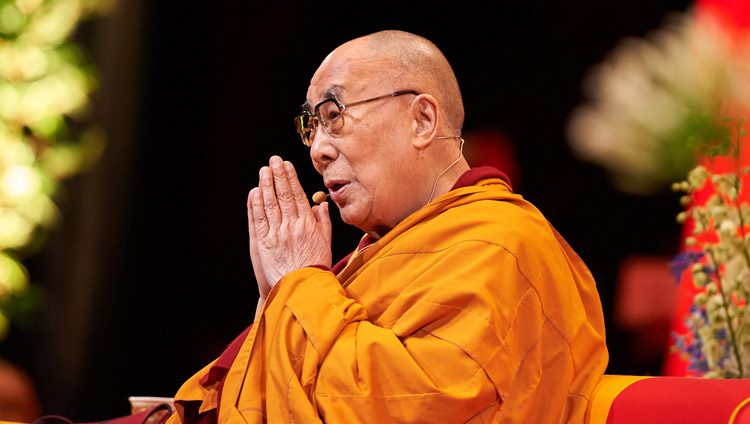 Dharamshala, India The spiritual leader of Tibet, His Holiness the Dalai Lama on Wednesday expressed his deep sadness over the tragic deaths and injuries that took place in a place of worship as a result of last Friday's shootings in Christchurch, New Zealand.

The Christchurch shootings, in which a gunman attacked two Christchurch mosques in Christchurch of New Zealand, killing 50 of the people who had congregated there for their prayers, took place during Friday Prayer on 15 March 2019, and people across the world have been in mourning over the lives that were lost.

Next day housands of people from across New Zealand—Catholics, Buddhists, Mormons, Maori, Muslims, and atheists alike—met at Forsyth Barr Stadium in Dunedin for a candlelight vigil held in memory of those killed in last week’s shooting. The stadium was the only venue large enough to safely house the expected crowd.

The Office of His Holiness the 14th Dalai Lama in a condolence statement said: "His Holiness the Dalai Lama has written to Rt. Hon. Jacinda Ardern, Prime Minister of New Zealand to express his deep sadness over the tragic deaths and injuries that took place in a place of worship as a result of last Friday's shootings in Christchurch. He offered his heartfelt prayers for those who died and conveyed his condolences through Ms Ardern to their families, friends and the people of New Zealand."

“I admire the courage, wisdom and leadership you have shown in spontaneously declaring that the victims of violence belong to the family of New Zealanders, while the perpetrator of violence set himself apart,” he wrote.

“Since we all depend upon others, we have to be inclusive in our concern for them. Wherever I go, I consider myself to be just one among seven billion human beings alive today," the Nobel Peace lureate said.

"It is unthinkable that these days we see people killing each other in the name of religion or out of hostility to another faith. This is why I am committed to creating a greater awareness of the oneness of humanity—the fact that as human beings we are mentally, physically and emotionally the same," His Holiness further said.

“I applaud the way you and the people of New Zealand have reached out with compassion and support to members of the Muslim community among you. It is encouraging too that across the world, people of all faiths are visiting mosques in solidarity with Muslims after the Christchurch shootings," the Tibetan leader added.

His Holiness concluded his letter by observing, “Your Government's determination to reform gun laws will contribute to peace and security, but equally important is to resist hatred and fear by cultivating warm-heartedness as you have shown.”

The shooting sent shockwaves through New Zealand and the rest of the world, but was the shock rocked Dunedin particular, since it was revealed that the Australian gunmen had been living in the city for two years while he developed his plan and wrote his manifesto.

During his speech at the gathering, Dunedin mayor Dave Cull addressed the question that has been on the minds of so many peole: “Why did this person come from outside our country, to our community, with such evil intent? Why here? Why among us?”

But the more than 20,000 residents gathered in the stadium were determined to show the world that it was not division and hatred, but love and inclusiveness had triumphed, as the chairman of the Otago Muslim Association, Mohammed Rizwan, declared: “He failed because he picked us, and we are here."

Political and religious leaders around the world are expressing their condemnation after the terror attack in Christchurch. The leaders of Britain, the United States, Turkey and Pakistan are among those who've expressed their condolences over the vicious attack in New Zealand that saw 50 people killed and dozens more seriously injured on Friday.

UK Prime Minister Theresa May says her country will support New Zealand in any way possible, while the Queen has also issued a statement sending her condolences. US President Donald Trump has taken to Twitter to send his ‘warmest sympathies’ to the people of New Zealand. Prime Minister Scott Morrison has condemned the attack and ordered Australian flags to fly at half-mast, while Opposition Leader Bill Shorten has described the massacre as ‘chilling in its callous preparation’.