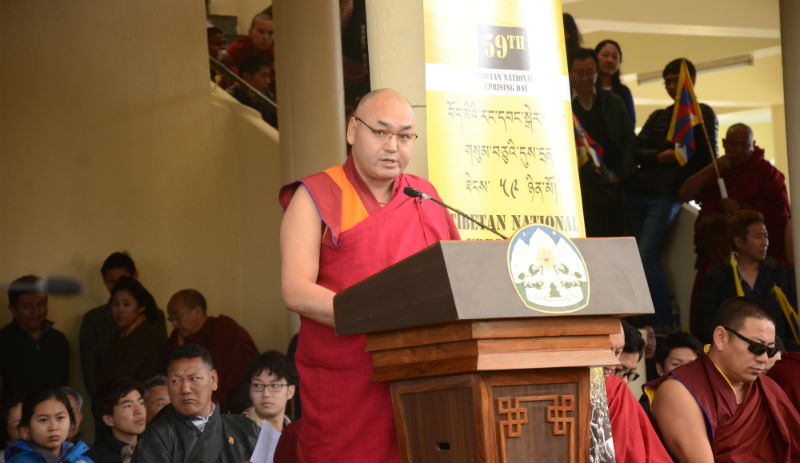 Dharamshala, India — "This created a situation of utmost urgency leading the Tibetan people from all the three traditional provinces of Tibet to revolt in unison in a spontaneous uprising movement against the Chinese invaders on 10th of March in 1959," the Speaker of the Tibetan Parliament-in-Exile told a crowd of thousands people, to mark the 59th anniversary of the Tibetan national uprising day.

Marking the 59th anniversary of Tibet's National Uprising day, the Tibetan Parliament-in-Exile called for the unity of all Tibetans and remembered those lost during the decades-long struggle.

The statement read: "Today marks the completion of 59 years of Communist-ruled China’s armed occupation and annexation of the great nation of Tibet. Adopting a policy of forced occupation of Tibetan territory, China under the rule of its communist party not only launched an armed invasion of Tibet and carried out an unimaginable scale of repression on its people; it also plotted devious scheme that directly threatened the life of irreplaceable spiritual leader and temporal head of the Tibetan nation and people, His Holiness the 14th Dalai Lama.

"This created a situation of utmost urgency leading the Tibetan people from all the three traditional provinces of Tibet to revolt in unison in a spontaneous uprising movement against the Chinese invaders on 10th of March in 1959. The Chinese army launched an armed repression of the Tibetan uprising, by bombarding the Potala palace and the Norbulingka with artillery shells. It was the most tragic development without any parallel in the history of Tibet.

"It is impossible for the people of the Tibetan Snowland, through generation after generation, to ever forget that tragic moment in their nation’s history," Speaker Khenpo Sonam Tenphel said, adding: "This day is also being observed, at the same time, as the Martyr’s Day in commemoration of all the heroic men and women of Tibet for their patriotism and sacrifices."

"And so, on this occasion, we offer our gratitude and solemn remembrance to the martyred men and women of Tibet for their valor and sacrifices for the sake of the religious, political and ethnic causes of the Tibetan nation.

"To those in Tibet today, who, continue to suffer persecutions in prisons and in under other circumstances too, we offer our solidarity.

"It is under such repressions that more than 1.2 million Tibetan people have been deprived of their lives," the statement added.

"In particular, since the 23rd of February 2009, when Tabey, a monk from Kirti Monastery in Ngaba Prefecture of Sichuan Province set himself on fire till the 7th of March, 2018 when Tsekho, a 44 year old man from a nomadic village in Meruma township in Amdo Ngaba torched himself, a total of 152 Tibetan people – including monks and nuns as well as lay men and women, both old and young – have been learnt and verified to have carried out self-immolations in protest against the Chinese rule.

From the 1st of February this year, the so-called State Religious Affairs Bureau of China’s State Council stated that the Chinese government was going to implement a new policy on matters concerned with religion. Under it, the Chinese government took direct control of the funds and all aspects of religious activities of every monastery in Tibet.

Incorporating the stability and prosperity of both the religious and political matters together, it continues to abuse the Tibetan’s freedom of religious belief and hurt their sentiments.

The statement also called for continued dialogue with China, saying, "we reiterate our call on the leaders of the People’s Republic of China too to seize the opportunity that still exits, to eschew the blame game and make urgent efforts to arrive at a Sino-Tibetan dialogue.

"All the people of Tibet have an unavoidable duty of great importance, devoid of any subterfuge, to ensure that their conducts accomplish results that gladden His Holiness the Dalai Lama’s heart on the basis of following his guiding light, especially by adhering to firm commitment to the unity of all the traditional provinces of Tibet and all the religious traditions of the land.

"And on the basis of expressing remembrance of gratitude we owe to the governments and people of India, both at the centre and in the states, besides international governments, parliaments and people, we take this opportunity to say ‘Thank You Very Much’ to all."

Closing the statement, Tibetan Parliament states, "Finally, we pray that His Holiness the Dalai Lama, the incomparable leader of all Tibetans, live for a hundred aeons and may the just cause of the Tibetan people prevail."