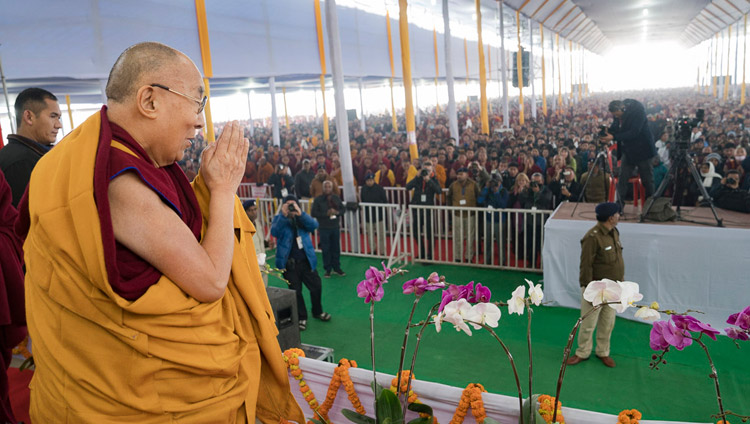 Bodh Gaya, Bihar, India — "People are bullying and killing each other. Others are neglected to die of starvation. How can we put up with this when we regularly pray for all beings to be free from suffering? As followers of the Buddha we should ask ourselves every day how we can help others, since we all want happiness and don’t want suffering," His Holiness the Dalai Lama insisted during the three day teaching held in Bodhgaya.

More than 50,000 people gathered at the Kalachakra Maidan in Bodhgaya, northeastern India for His Holiness the Dalai Lama's teaching, requested by the Nalanda Shiksha group. Members of the group attending the teaching made up about 2000 from various parts of India. Also in attendance were 3000 foreigners hailing from 69 different countries. Simultaneous translation of His Holiness's teaching in Tibetan was broadcast over FM in English, Hindi, Russian, Mongolian, French, Chinese, Korean, Vietnamese, Japanese and Spanish.

Beginning his teaching, His Holiness said, ????fter the Buddha had attained enlightenment, he declared, ‘Profound and peaceful, free from complexity, uncompounded luminosity—I have found a nectar-like Dharma. Yet if I were to teach it, noone would understand, so I shall remain silent here in the forest.’ One reason for this is that existing Indian spiritual traditions asserted the existence of an independent self, a permanent agent going from one life to the next. The Buddha saw that clinging to the notion of an independent self is the root of all other mental afflictions. After realizing selflessness, he saw that it would be incomprehensible to most people if he were to teach about it."

His Holiness emphasized that Buddhism originated in India, not in China or Tibet, and that masters of Nalanda like Nagarjuna were Indian too. Therefore, His Holiness said, it was propitious that the main disciples today were Indian. For more than 2000 years Buddhism has spread across Asia, so it would be appropriate if the Nalanda Tradition that has been kept alive in Tibet were to be re-established today in India.

“The various religious traditions have long flourished in India and lived alongside one another in harmony,” His Holiness added. ???? secular view according equal regard to all faiths prevails here. We must preserve it. Meanwhile, I am doing my best to revive awareness of ancient Indian knowledge in this country. However, in the long run, the most important thing is to be a good human being.

????mong 7 billion human beings alive today, 1 billion have no interest in religious practice. But even among those who remain, some use religion as grounds for division. For religion to become a source of conflict is really very sad.

“We human beings are social animals, we rely on each other. We are not self-sufficient. We are at peace with one another here, but elsewhere conflict abounds. People are bullying and killing each other. Others are neglected to die of starvation. How can we put up with this when we regularly pray for all beings to be free from suffering? As followers of the Buddha we should ask ourselves every day how we can help others, since we all want happiness and don’t want suffering.

????ecause modern education currently has little time for human values, we need to augment it with discussion of love and compassion. Common sense tells us, for example, that an affectionate, compassionate family is happy, whereas a family riven by jealousy and competitiveness is not.”

Despite poor weather, the second day of the teaching also saw a huge turnout, and His Holiness began by saying, “We have all gathered here, some from far away, because we all want to be happy and to avoid suffering. This is true even of insects. We don’t need to apply reason to understand it; we can just see it for ourselves. What we do need to use reason for is to evaluate the advantages and disadvantages of concern for others and self-centeredness. Scientists say that basic human nature is compassionate. It isn’t a matter of religious practice so much as a recognition that just as you appreciate it when others show you affection and compassion, others appreciate being treated the same way too. It’s a matter of training the mind.

“In a world where people easily fall under the sway of anger and hatred, we need love, patience, tolerance and contentment. Indian sages have analyzed what brings peace of mind and what disturbs it. You may have all the physical amenities you need to be comfortable, but it you have no peace of mind, they won’t make you happy. On the other hand if you have peace of mind, you’ll be happy whether you have those amenities or not. The important goal is to achieve peace of mind. We need to recognize that when mental afflictions occur they give rise to unpleasant experience and disturb our inner peace.”

The third and final day of the teaching saw a ceremony meant for generating the awakening mind of Bodhichitta. His Holiness explained, "Today I'd like to hold a ceremony for generating the awakening mind of bodhichitta. At the present time it would be good to reflect that in addition to his message of love and compassion, the Buddha also stressed the importance of non-violence. We need to think about the advantages of that and the drawbacks of violence. Similarly, we need to compare the benefits of concern for others with the perils of self-centeredness. Bodhichitta involves developing an expansive wish to help all beings—and this sacred site is an excellent place to do so."

His Holiness carefully guided the audience through a visualization of the Buddha surrounded by the eight close bodhisattva disciples, and finally led the audience in first reciting the seven limb prayer and the verse for taking refuge and cultivating the awakening mind.