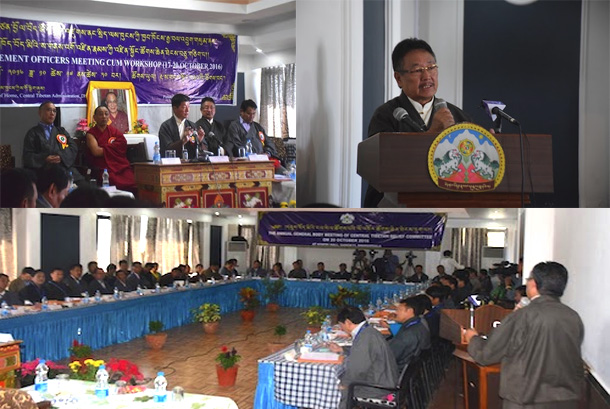 Dharamshala – Expressing in-depth gratitude and respect for their lifelong contribution to the Tibetan cause, Sikyong Dr Lobsang Lobsang Sangay avowed that the elder generations are the pillars of Tibetan community.

Unveiling improved schemes and support for older section of Tibetan community, Sikyong said that "The elder people of our community are the pioneer generation who spearheaded the Tibetan movement in its most difficult phase and led us on a path of development which has transformed the lives of the exile Tibetan population."

The democratically elected political leader of the Tibetan People said that older generations are the pioneer generation who experienced first hand, the brutal occupation of Tibet and fought real battles against the Chinese army."

Speaking at the meeting, Sikyong also observed that the shared sense of progress and vision encapsulated in the four-day discussion laid a foundation for renewed efforts in serving the overall welfare of the community.

He particularly stressed that both the central and local administration need a renewed focus on radically addressing the grievances of the poorer section in Tibetan community and improving care for elder people who are more vulnerable to poverty.

Some of the key discussions in the four-day meeting includes proposals to set out improvement in elderly-care; revamped schemes to provide a vital safety net for the poorer section of our community including immediate financial and medical support; formulation of an all-round sustainable development projects; registration and acquisition of official status for the Tibetan settlements at its respective district administration; establishment of a complete database information system for CTA and its offices.