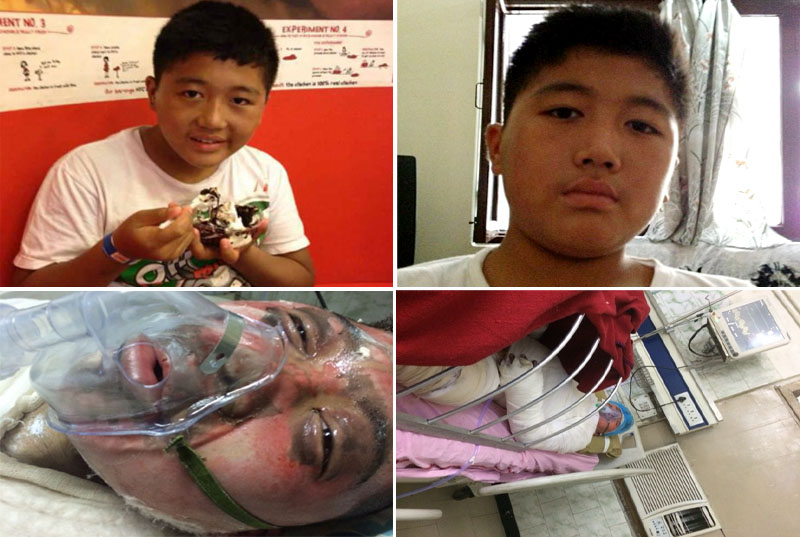 Dharamshala — A 16-year-old Tibetan schoolboy set himself on fire in protest against the repressive Chinese occupation of Tibet, on Tuesday, February 29, in Dehradun, Uttarkhand State, India, calling for the restoration of complete independence for Tibet.

Dorjee Tsering from a Tibetan settlement in Manali District survived the protest but reportedly suffered burns to 95% of his body and is currently being treated at a hospital in Delhi.

After dousing himself in petrol and setting himself alight, Tsering reportedly called out for Tibet's complete independence before being engulfed in flames. He carried out the protest outside an old people's home after visiting his grandfather.

His father, Thupten, is currently with him in Delhi said that the incident is heart breaking but he is proud of his son for his sacrifice for the Tibetan nation.

"I did discuss my intentions with my parents earlier, who told me they would kill themselves if I did this," Tsering said from his hospital bed, speaking with Tibetan community representatives.

"In 1959, China invaded Tibet, I have the will to do something for Tibet when I was young and thought that I could sacrifice this body for the Tibetan cause," he said.

"I want His Holiness the Dalai Lama to live long and for Tibet to achieve its independence," he added.

In a statement made by Free Tibet, director Eleanor Byrne-Rosengren said: "Six months have passed since the last self-immolation inside Tibet. China's use of collective punishments on the families and communities of self-immolation protesters has certainly had a deterrent effect but whether this form of protest is over in Tibet, no one can say.

"Dorjee Tsering's protest was a sign of how deep and sustained Tibetan opposition to Chinese rule remains among Tibetans outside Tibet. It was also a reminder that whether inside or outside the country, young Tibetans feel the sense of injustice and are driven to act because of it."

Since 1998, eight Tibetans in exile have self-immolated in expression of solidarity with the Tibetan people inside Tibet.

At least 150 Tibetans have self-immolated in protest against the repressive Chinese occupation of Tibet. Of these, 143 did so within Tibet, while the remaining eight were living in exile and of them125 have died, including 123 within Tibet and three abroad.

Tsering is a student in the 10th grade at Mussoorie Tibetan Homes School and his family believe he may have been planning the protest for some time. They said he had asked them how they would feel if he did something for the Tibetan struggle during an earlier school holiday.

The tragic news of the protests comes as Tibetans prepare to mark the anniversary of the Tibetan National Uprising against Chinese rule in 1959. Chinese authorities recently sealed off the central Tibet to foreign tourists, as it has been every March since the protests in 2008.