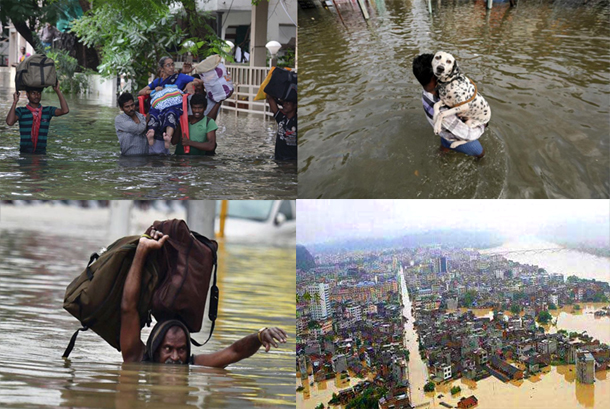 Dharamshala — The spiritual leader of Tibet His Holiness the Dalai Lama has expressed his sympathy to the thousands of people who have been displaced by the recent flooding in Tamil Nadu.

In a letter to Tamil Nadu Chief Minister J Jayalalithaa, on December 4, His Holiness expressed his sadness at the unprecedented destruction and disruption of normal life in Chennai as a result of the heaviest rains in several decades.

"Chennai was one of the Indian cities I visited when I first came to India in 1956 for the Buddha Jayanthi celebrations," said the Tibetan Buddhist spiritual leader.

"Over the years I have visited this beautiful city several times, most recently three weeks ago as these rains began."

As a token of his concern for those who have suffered in this catastrophe, he wrote that he was directing the Dalai Lama Trust to make a donation of Rs. 1500000/- (Rupees fifteen lakhs) towards ongoing relief and rescue operations.

"I would like to convey to you and the people of Tamil Nadu my prayers for all those who have suffered loss of life and property," said the 1989 Nobel Peace Prize laureate.

The heaviest rainfall in over a century caused massive flooding across Tamil Nadu, driving thousands from their homes, shutting auto factories and paralysing the airport in capital Chennai.

Incessant rainfall in India's fourth most-populous city has cut off more than three million people from basic services and disrupted power supplies, Indian media reported. Most mobile networks were down in the city and food supplies running low, according to media reports.

More than 200 people were critically injured over the past 24 hours in Chennai, a senior home ministry official told media. The death toll from flooding rose to 269 after the heaviest cloudburst in over a century.

Tamil Nadu is a major rice and sugar cane producing region, and a senior member of a local farmers' association said floods had washed out up to four agricultural districts. Chennai, India's fourth most populous city, is a major auto manufacturing and IT outsourcing hub.

Weather experts say the seasonal northeast monsoon was responsible for the flooding in the city of six million, but was amplified this year by El Nino, a warming of the eastern Pacific Ocean that can have far-reaching climate effects.