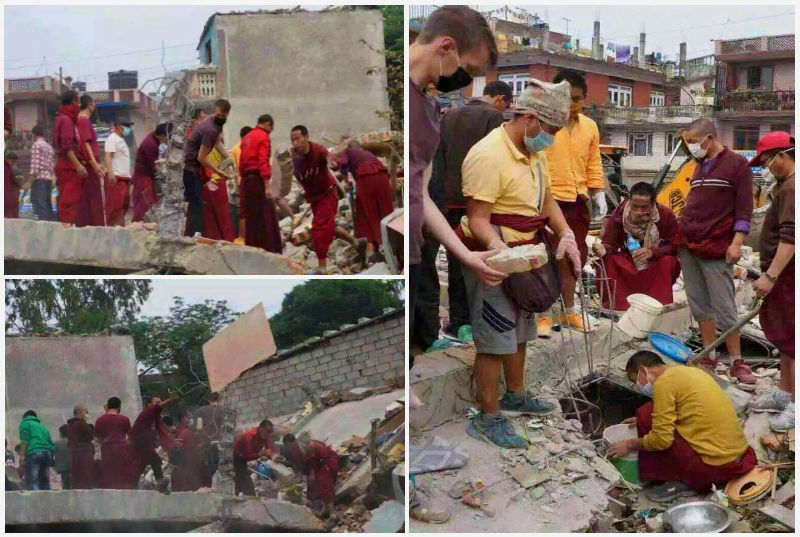 Dharamshala — The Office of Tibet located in Kathmandu compiled reports from various Tibetan settlement office across Nepal regarding the effects of the recent earthquake on the Tibetan communities. According to the report, there has been a great deal of damage to property and minimal loss of life for Tibetans.

According to the information sent by the Settlement Officer in the regions of Solokhumbu, Walung and Rasogiri, there was no loss of lives reported, only minimal damage to a public kitchen, a school building, and one private house collapsed. However, contact has yet to be made to the settlement in Walung.

Most of the reported damage is within Kathmandu itself. According to the Settlement Officer of Swayambhu and Lo tserok, several homes of Tibetans sustained cracks and other damage, in addition to several fields and agricultural lands. In Swayambhu, a building collapsed with two Tibetan brothers inside. One has died, while the other sustained severe injuries and is being treated at the hospital.

In Boudha and Jorpati, a building housing 37 Tibetan families sustained severe damage and is in danger of collapsing. Many others in Boudha have reported damages to their homes and rented housing. Libing Sendrak Rinpoche's monastery sustained severe damage to the monks' quarters, while there was no loss of life reported. One 30 year old Tibetan named Chime died after the walls of his home collapsed. Additionally a nun was killed and three others sustained serious injuries, all of whom are receiving medical attention.

The Office of Tibet has not been able to contact the settlement offices in the city of Pokhara and the frontier regions of Dothang, Manang, Tsum and Nubri. Further information is expected to become available in the coming days.