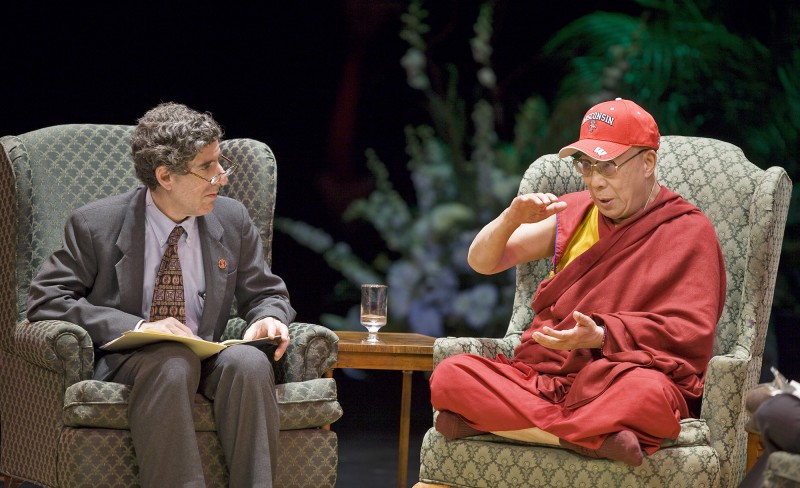 MADISON: Tibet's political and spiritual leader, His Holiness the Dalai Lama said Sunday in Madison, US that he is hopeful that science can make the world more peaceful by encouraging positive mental qualities such as empathy and compassion.

Madison governor Jim Doyle warmly welcomed His Holiness, and the Madison Youth Choir performed before high-backed chairs were brought out for the discussion. Two children in the choir presented the Tibetan leader with a cap, which he wore throughout the event.

His Holiness the Dalai Lama spoke of the importance of compassion, empathy and oneness to Madison on Sunday afternoon, mixing in levity and tales of sibling rivalry with his brother, while sitting crosslegged in his chair and wearing a red Wisconsin baseball cap. His Holiness said that, unlike religion in which differing beliefs have caused sharp divisions across the globe, "science is universal" and can be used to bring people together.

Nobel Peace Prize winner Tenzin Gyatso, the 14th Dalai Lama of Tibet, was in town to participate in an hourlong dialogue with University of Wisconsin-Madison neuroscientist Richard Davidson, founder of the Center for Investigating Healthy Minds which is set to open in the fall in the Waisman Center on campus. He called for "a special effort" to be taken to promote traits like tolerance, forgiveness and concern for the well-being of others, among them children, before they are taught to focus on divisions like race and religion. He noted children from Jewish and Palestinian families will play together if they are allowed to, even though there may be hostility between their families.

Through education and practice, "these ideas will become a part of their life," His Holiness said during the hour long discussion. His Holiness also said that people get a benefit from taking care of other people. When he meets with people, His Holiness said, he treats a president or queen the same as he would a beggar, “They're are all the same. They want a happy life.”

His Holiness the Dalai Lama's visit marked the inauguration of the Center for Investigating Healthy Minds at the University of Wisconsin-Madison, which will be dedicated to researching qualities of the mind like kindness and compassion.

His Holiness the Dalai Lama defined a healthy mind as one that is clear, calm, kind, gentle and free of "destructive emotions." He said he had no doubt that a healthy mind contributes to good physical health and a sense of community.

A human being’s “basic nature is pure,” and “everyone experiences positive and negative emotions,” but there is the possibility of the mind being distorted by ignorance, he told the crowd of about 1,100 people in the Overture Center’s Capitol Theater.

His event was presented as a discussion with center director Richard Davidson, a neuroscientist whose work has been inspired by His Holiness. Davidson's research on the brains of veteran practitioners of meditation, including Buddhist monks, suggests mental exercises can improve one's compassion, empathy, kindness and attention.

Earlier on Sunday, His Holiness the Dalai Lama addressed a group of scientists in the building where the center is under construction. The university says it will be the only research centre in the world with a meditation room adjacent to a brain imaging laboratory.

The center will carry out research into what causes positive mental qualities and translation of spiritual texts that will explore the impact of contemplative practices in the real world.

Its scientists are expected to start a study this fall teaching mental exercises to fifth graders in Madison schools to promote qualities like attention, relaxation and empathy. They want to find out whether such exercises can reduce bullying and have other positive outcomes in the classroom.

"The new Center for Investigating Healthy Minds is another shining example of how research based here in Madison can change the world," said Gov. Jim Doyle. “We have learned so much from you about compassion and its study over the years,” Davidson told His Holiness, whom he first met in 1992. He said it’s important for a person’s well-being to focus on the welfare of others and decrease focus on themselves, adding that a focus on others is at the heart of compassion.

The visit marked the eighth time His Holiness the Dalai Lama has come to the Madison area since 1979.