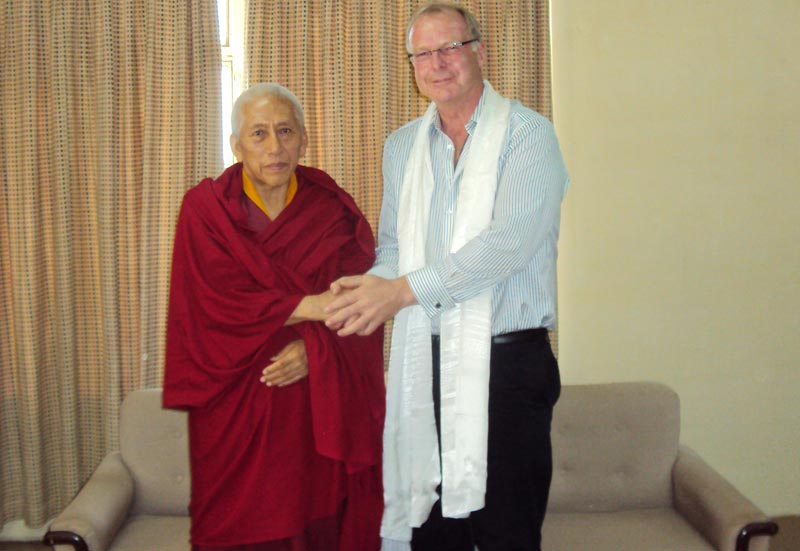 Dharamshala: A British Humanitarian, Lord Christopher Macklin, met the Tibetan prime-minister (Kalon Tripa) Prof. Samdhong Rinpoche on Wednesday 12 May, for his first meeting to discuss the engagement of many of the Tibetan Humanitarian Projects -- such as education, media and health -- which are currently planned and underway in Dharamshala where the Tibetan government in-exile is based.

Lord Christopher explained his spirituality and beliefs which are in symbiant with the Buddhist teachings and invited the Tibetan prime-minister to support his quest to help both financially and physically with a number of projects which are scheduled to commence within Dharamshala.

He further discussed the various 'Spiritual Roadshows' he has planned over the next few months in America. These Roadshows, it is hoped, will give people a vision to allow unconditional Love in their hearts and unlock them and remove their Conditioning from the corporate-governmental system to which they currently belong. Lord Christopher said that all consuming negativity which he has seen around the world needs to be lifted and the 'Time Is Now' for this to happen. He hopes through his work he will be able to make a large positive impact throughout the world.

Christopher has much support around the world for both his Humanitarian Projects and his beliefs and teachings. He has dedicated his life to this work.

He also gave his full support to all the Tibetan people around the world describing them as beautiful spiritual people, and hoped through his efforts that they will continue to stay this way. Prof. Samdhong Rimpoche appreciated his work and offered his prayers and good wishes for the success of his future endeavours.