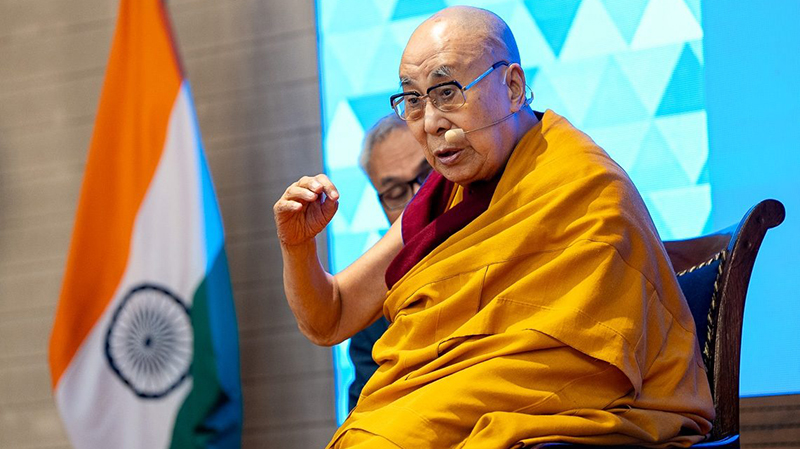 New Delhi – His Holiness the Dalai Lama visited the Indian Institute of Public Administration (IIPA) on Saturday and His Holiness addressed the audience, “Dividing people into ‘us’ and ‘them’ is out of date. Instead, we should think of them in terms of ‘karuna’ and ‘ahimsa’. If we cultivate this precious thought of ‘karuna’, we’ll be free from fear, anger and hatred. We’ll sleep soundly and enjoy good physical health.”

His Holiness the Dalai Lama invited to inaugurate the TN Chaturvedi Memorial Lecture at the Indian Institute of Public Administration (IIPA) on January 21, 2023. TN Chaturvedi was a senior official of the Indian Administrative Service (IAS). After his retirement, he served as Comptroller and Auditor General of India and later as Governor of Karnataka. Members of the Chaturvedi family, IIPA Director General SN Tripathi, Nehru Memorial Museum and Library Deputy Director RK Mishra and others welcomed His Holiness on his arrival. He was felicitated by IIPA DG SN Tripathi, welcomed by Atulindra Nath Chaturvedi and introduced to the public by Aatil Nath Chaturvedi.

Then His Holiness the Dalai Lama begins his speech by saying, “As I child in Tibet I learned about aspects of ancient Indian thought. Later I came to this country as a refugee, became a guest of the Government of India and have spent the majority of my life here. In that time, I’ve come to appreciate such qualities of ancient Indian thought as ‘karuna’ and ‘ahimsa’. Humanity needs these concepts in practice.’’

“Although I didn’t have the opportunity to meet Mahatma Gandhi, I was able to meet Pandit Nehru, Indira Gandhi and Lal Bahadur Shastri and as a result of talking to them developed sincere respect for them. India is a democratic country, a place where many religious traditions live together under secular principles—which is wonderful,” the spiritual leader of Tibet said.

“My life now is dedicated to promoting ‘karuna' and ‘ahimsa', but I express my admiration for them just as an ordinary human being. We are all the same as human beings. We’re born the same way and we survive because of our mother’s compassion. As human beings it’s our nature to be compassionate. We’re social animals. We depend on our community to survive, therefore we in turn to support the community. By extension, all eight billion human beings alive today have to learn to live together,” the Nobel Peace Prize Laureate said.

“When we talk about ‘karuna’ and ‘ahimsa’ we are not thinking of the differences between us, but rather ways in which we are the same. Where there is ‘karuna’ ‘ahimsa’ naturally comes about. When you have ‘karuna’ within, it gives you inner strength and self-confidence. And on that basis, you can see other human beings as your brothers and sisters,” His Holiness added.

“Dividing people into ‘us’ and ‘them’ is out of date. Instead, we should think of them in terms of ‘karuna’ and ‘ahimsa’. If we cultivate this precious thought of ‘karuna’, we’ll be free from fear, anger and hatred. We will sleep soundly and enjoy good physical health,” His Holiness the Dalai Lama mentioned.

“My life has been difficult, but difficulties have brought opportunities to put these deeper inner values into practice. It’s foolish to think only in narrow terms, dwelling on our national, ideological or religious identity, because as human beings we are all the same and we have to live together,” the spiritual leader of Tibet said.

“When I think of TN Chaturvedi, I remember that he lived his life in the spirit of ‘karuna’ and ‘ahimsa’. I am now 87 years old, but I look younger than I am because I have peace of mind. Nevertheless, having an attractive external appearance isn’t nearly as important as revealing the inner beauty of ‘karuna’,” His Holiness said.

After the lecture, the question and answer section began and His Holiness the Dalai Lama answered questions from the audience.

His Holiness the Dalai Lama arrived safely at his residence in Dharamshala from New Delhi on January 23, 2023, after staying for more than a month in Bodhgaya, Bihar and New Delhi, where he gave teachings and was offered long life prayers by Tibetans and Himalayans. Tibetans and the people of Dharamshala stood on both sides of the road, holding white scarfs (khatas), incense and flowers, and welcomed His Holiness the Dalai Lama with smiles and great joy.