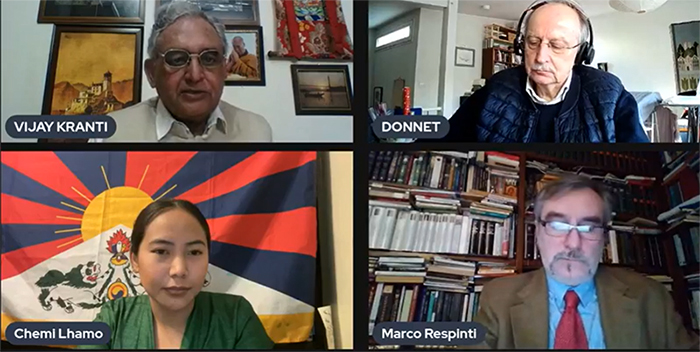 New Delhi – One common observation of the speakers in an international webinar on “Consequences of Xi Jinping’s Failure on Covid-19 Front” was that because of the total opaqueness of the Xi Jinping government about the causes, severity, and other issues related to Wuhan virus, ordinary Chinese citizens have lost faith in their communist government and its leaders.

Another consequence which the speakers underlined was that the international community too has finally realized that the reality in the context of China is far different from what the Chinese government claims or boasts about. And yet another consequence that China is going to face because of the outbreak of Covid-19 is on its economy and business fronts. As a result of the loss of faith in the Chinese government before the international community, Beijing is bound to lose a substantial chunk of its international business which may start reflecting in the form of a sharp fall in the GDP, economic growth, and international business in the very near future.

The webinar was organised jointly by the Centre for Himalayan Asia Studies and Engagement (CHASE) and Tibetan Youth Congress (TYC) on January 15, 2023. The main speakers in the webinar were Pierre Antoine Donnet from Paris, who is an internationally acclaimed expert and researcher on China and has been a correspondent in the Beijing bureau of French news agency Agence France-Presse (AFP). He has already authored two books, one on Tibet and the other on China and his three more books are in the process of publication. The second speaker was Marco Repinti from Milano in Italy, who is a veteran observer of the situation of human rights and religious liberty in China. He is the Director-in-charge of ‘Bitter Winter’ which is published daily in many languages including English, Chinese, Italian, French and German.

The third speaker was Chemi Lhamo, a young Tibetan activist from Canada. She is currently the Canadian representative in the steering committee of the International Tibetan Network (ITN), which is a leading communication organisation that reports regularly on developments inside Tibet and other colonies of China like East Turkistan (Xinjiang) and Southern Mongolia. Vijay Kranti, Chairman of CHASE, journalist and a veteran Tibetologist, moderated the discussion. The question-answer session of the webinar was handled by Dr AayushiKetkar, who specialises in international relations and security and is an Associate Professor at the Special Centre for National Security Studies at JNU in New Delhi. Tsering Choephel, Joint Secretary of TYC delivered the vote of Thanks.

Pierre Donnet, who has been a keen observer of the Chinese system for over five decades, was of the opinion that it has become clear by now that President Xi and his government did not use the ‘Zero-Covid’ policy to protect the life of Chinese citizens. Rather, they used it to further strengthen their grip on power and for increased surveillance of ordinary citizens and political opponents within the Chinese Communist Party (CCP). Referring to the shockwaves which the tragic fire incident at a housing complex in Urumchi (Xinjiang) sent to ordinary Chinese citizens in mainland China, he said that a common public expression “We all are Uyghurs” which was noticed among the Chinese citizens and across the social media clearly reflects the loss of people’s faith in Xi and his government.

Talking about the economic fallout of mishandling Covid-19 by the Beijing government, Donnet said, “Most international monitory institutions are of the opinion that even though economic growth in China has been running in double digits for nearly three decades, it may not even achieve Beijing’s own expectation of 5 pc and can go below 3pc this time.” Talking about the loss of face by President Xi and CCP, he said that Covid-9 has significantly hurt their credibility. “CCP may not fall in the imminent future but the position of Xi is quite fragile now, he has lost faith among a good section within the party as well as among common Chinese people,” he added.

Marco Respinti said, “Despite three-year-long suffering and millions of deaths across the world, we are still at a loss to understand the origin and the spread of the Wuhan virus. By refusing to share correct information, the Chinese government has made it a mystery. But the story of handling Covid within China has further made it a mystery within a mystery.” He regretted that China made things still worse by crushing all attempts by its own doctors and citizens, who wanted to inform and warn their own people and the world about the spread of the virus. Terming Covid-19 as ‘CCP-Virus’ Marco said that in addition to holding information about the failure of its efforts in stopping the spread of the virus, the Beijing government misguided the world by influencing WHO and making fake claims about its useless vaccines and exporting it to many gullible countries.

Chemi Lhamo was of the opinion that instead of sharing information and helping the world to control the spread of its virus the Chinese government rather first tried to weaponize this tragedy by letting it spread and play havoc in countries across the world and then by making fake claims about the efficacy of its vaccines. ” But this policy of President Xi has only helped in exposing himself and his government before the world community and his own Chinese people. People of China have now seen through his falsehood and have now lost faith in their own government and the CCP whom they used to believe since decades,” she said.

Lhamo gave an example of one such demonstration in Canada where Tibetans and Chinese were demonstrating against Xi and CCP’s Covid-19 policies in China. “As we were shouting slogans, an international Chinese student came to me and said to me, ‘I love my country China, until recently I had always believed what our communist leaders and the government would tell us. But now I realize that we have been fed with lies. I want to know about Tibet from you.’ In another demonstration at Columbia University the Chinese students joined us and started shouting ‘Free Tibet’ slogans,” she said.

“I think one of the biggest consequences of this Covid-19 episode is that the CCP and its leaders have lost the faith of their own people in China,” she added.