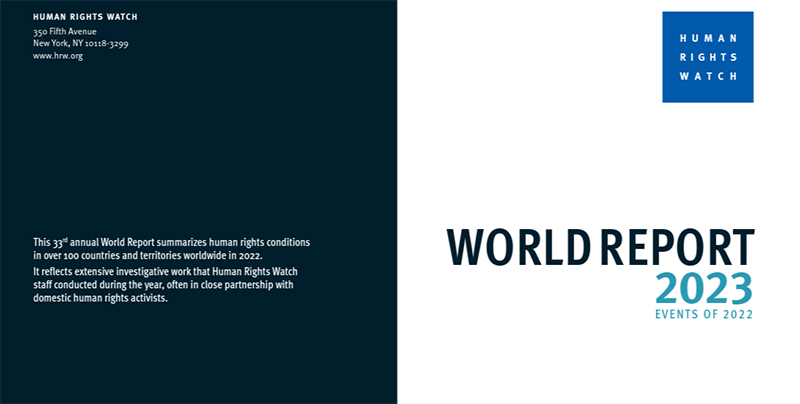 The Human Rights Watch based in New York, USA, released its 33rd annual World Report on January 12, 2023, which summarises the human rights situation in over 100 countries and territories around the world in 2022.

"Human rights crises do not arise from nowhere. Governments that fail to live up to their legal obligations to protect human rights at home sow the seeds of discontent, instability, and ultimately crisis. Left unchecked, the egregious actions of abusive governments escalate, cementing the belief that corruption, censorship, impunity, and violence are the most effective tools to achieve their aims. Ignoring human rights violations carries a heavy cost, and the ripple effects should not be underestimated," said Tirana Hassan, Acting Executive Director of Human Rights Watch,

The report on the China stated, “Repression deepened across China in 2022. Xi Jinping secured an unprecedented third term as the general secretary of the Chinese Communist Party, making him the country’s most powerful leader since Mao Zedong. In October, a man draped two banners over a bridge in Beijing, calling for the “dictatorial traitor” Xi to be removed, and for freedoms and universal suffrage for people in China. The lone protestor inspired solidarity protests around the world.”

“The Chinese government tightened its Covid-19 restrictions, imposing repeated, unpredictable lockdowns on hundreds of millions of people. In some cases, officials used barbed wire, metal bars, and large barriers to prevent people from leaving their homes. In Sichuan province, residents were unable to leave buildings even during an earthquake. During these lockdowns—which lasted from days to weeks—people reported difficulties accessing food and medical care, in some cases leading to deaths. Others reported privacy violations, censorship, disruptions to their livelihoods, and government brutality as police and health officials kicked and shoved people who resisted Covid restrictions. In Tibet and Xinjiang, residents reported even more draconian Covid-19 controls imposed by local authorities already severely limiting rights,” the report added.

The report on Tibet stated, “Authorities in Tibetan areas continue to enforce severe restrictions on freedoms of religion, expression, movement, and assembly. Popular concerns over issues such as mass relocation, environmental degradation, or the phasing out of the Tibetan language in primary education were met with repression. Local officials are required to educate the public in “obeying the law,” and cash rewards are offered to citizens prepared to inform on others.”

“Under intense censorship, Tibetans continue to be detained for online offenses, such as having banned content on their phones or “spreading rumors.” Authorities introduced a ban on posting religious teaching and other content online, intended to enforce tight official control over religious institutions and teachers. In a Tibetan area of Sichuan province, regional authorities ordered the demolition of outdoor statues and temples, the construction of which had initially been approved,” the report mentioned.

While reporting on the self-immolation and violation of religious freedom by the Chinese government, the report said, “Reports emerged of the arrest and sentencing of Tibetan religious and cultural figures suspected of dissent, and of their mistreatment in detention—notably the writers Go Sherab Gyatso, Rongwo Gendun Lhundrup, and Tubten Lodro (alias Sabuchey). In March, the popular young pop singer Tsewang Norbu staged a self-immolation protest in front of the Potala Palace, the first by a Tibetan from an urban background.”

In addition to highlighting the Chinese government's ongoing violations of religious freedom, the report states, “State control over religion has increased since 2016, when Xi called for “Sinicization” of religions. Going beyond controlling religion by dictating what constitutes “normal,” and therefore legal, religious activity, authorities now seek to comprehensively reshape religions such that they are consistent with the party’s ideology and that they help promote allegiance to the party and to Xi.”