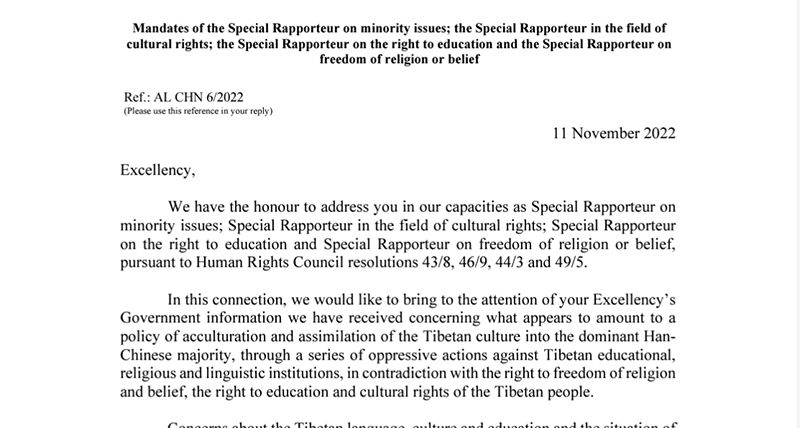 Geneva — Four UN human rights bodies questioned China over the closure of Tibetan schools and monastic schools, which are the main schools where Tibetan can be learned, and the residential schools, which have been built to teach only Chinese culture; about one million Tibetan children study there, which will turn Tibetan children into Chinese and disconnect them from their identity.

“We would like to bring to the attention of your Excellency’s Government information we have received concerning what appears to amount to a policy of acculturation and assimilation of the Tibetan culture into the dominant Han- Chinese majority, through a series of oppressive actions against Tibetan educational, religious and linguistic institutions, in contradiction with the right to freedom of religion and belief, the right to education and cultural rights of the Tibetan people,” the joint letter stated.

“According to the information received: The Chinese authorities pursue a large-scale campaign to assimilate Tibetan culture and language. The state dominant concept of ‘nation’ or minzu, the core of China’s current ‘second-generation ethnic policy’ (ronghe), regards all national, ethnic, linguistic and religious groups as secondary and subordinate to the state,” the letter mentioned.

“The state education system allegedly forces all children between the ages of 6 and 16 to be enrolled in Putonghua-language governmental schools that do not provide for substantive study of Tibetan history and culture. Voluntary initiatives to teach Tibetan language and culture outside schools are reportedly suppressed and their supporters are being detained,” the UN human rights bodies said.

“The adoption and enforcement of the ‘national common language’ law since 2000 has produced policies and laws that marginalize Tibetan language and culture. Tibetan children now learn Putonghua from preschool and are forced to complete a ‘compulsory education’ curriculum in Putonghua in government schools where they have no access to traditional or culturally relevant learning. In the framework of school mergers, Tibetan primary schools located in rural areas are shut down or subsumed into bigger Han Chinese medium schools,” the experts said.

“We express serious concern about what is reported as a policy of acculturation and assimilation of the Tibetan culture into the dominant Han-Chinese majority, through a series of oppressive actions against Tibetan educational, religious and linguistic institutions, in contradiction to the right to education, cultural rights, freedom of religion or belief and other minority rights of the Tibetan people. In particular, the residential schools system for Tibetan children appears to act as a large-scale program to assimilate Tibetans into majority Han culture, contrary to the international human rights standards,” the experts added.

“A child belonging to such a minority or who is indigenous shall not be denied the right, in community with other members of his or her group, to enjoy his or her own culture, to profess and practice his or her own religion, or to use his or her own language,” the human rights bodies said.

The four UN human rights bodies urged the Chinese government to: provide clarifications on how many schools – private, semi- private and state funded – with instruction in Tibetan language(s) are operational in China now and how their number has changed over the past 10 years.