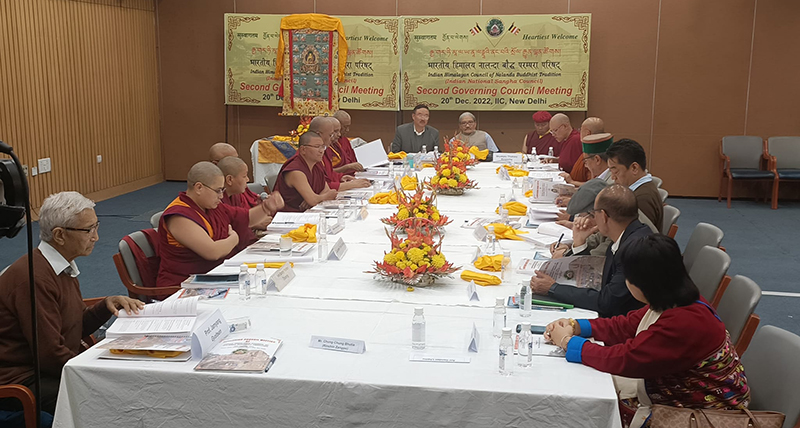 The meeting of the Indian Himalayan Council of Nalanda Buddhist Traditions on December 20, 2022. Photo: Tenzin Wangdak

New Delhi — Indian Himalayan Council of Nalanda Buddhist Traditions (IHCNBT) met to discuss ways to preserve and develop Himalayan Buddhism, with a focus on monastic education. At the same time, it passed a resolution stating that Himalayan Buddhists would never accept the Chinese appointment of a successor to the Dalai Lama.

The Indian Himalayan Council of Nalanda Buddhist Traditions organised a meeting to discuss about Buddhism and how it can be promoted and how it can benefit people. Rinpoches and representatives of different monasteries from the Himalayan regions attended the meeting and they passed a resolution on the reincarnation of His Holiness the 14th Dalai Lama on December 20, 2022, in New Delhi, India.

The resolution stated, " If the government of the People's Republic of China, for political ends, chooses a candidate for the Dalai Lama, the people of the Himalayas will never accept it, never pay devotional obeisance to such a political appointee and publicly denounce such a move by anyone."

The resolution explained, "The cultural and devotional methods and process of recognizing the reincarnation of the Dalai Lamas are deeply religious and cultural affairs followed with much rigour in Nalanda Tibetan Buddhism. Thus the system of recognizing reincarnated spiritual beings is a religious practice unique to Nalanda Buddhism and the philosophy of the principle of life after death. No government or any Individual has the right to interfere in this matter. This religious activity has to be conducted as per the responsisblities that His Holiness the Dalai Lama enshrines and entrusts. The Sole authority on the reincarnation of His Holiness The Dalal Lama is Ganden Phodrang Institution. No one including China should interfere with such a holy and devotional process."