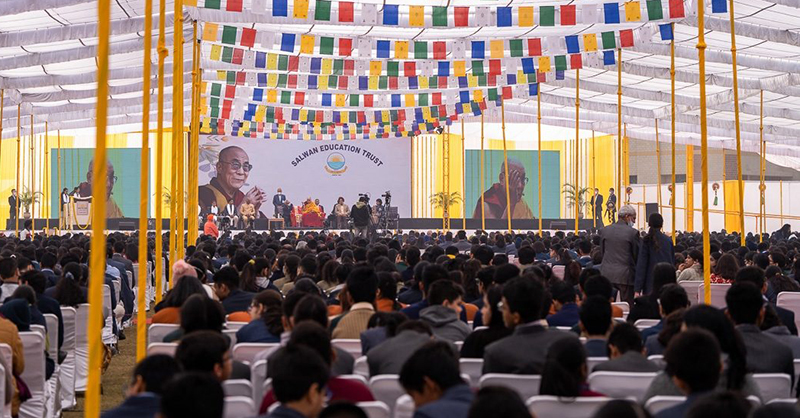 New Delhi — His Holiness the Dalai Lama visited Salwan Education Trust on Wenesday and he said to the teachers and students, “Peace will not fall from the sky. It depends on us developing a genuine sense of brotherhood and sisterhood. On a superficial level there are differences between us, but they are no grounds for fighting with others. We need to make a peaceful world free of weapons. If disagreements arise, we must solve them by talking them through. Weapons are of no use."

“As children we play with each other with no regard for what our religion or nationality may be. If our companions smile and play, we are happy to play with them. This is because, essentially, we are all the same as human beings. However, education tends to teach us to focus on superficial differences between us, which can lead to friction and discrimination," His Holiness said.

“India has long-standing traditions of ‘karuna’ and ‘ahimsa’—compassion and doing no harm. We must try to follow these basic human values. Tigers and lions have sharp teeth and claws that indicate their need to prey on and eat other animals, but the human form suggests that we are much more inclined to being compassionate and not doing harm. From a biological point of view, we should be peaceful creatures," he added.

“Since we survive in dependence on the kindness of others, we need to maintain a sense of ‘karuna' and ‘ahimsa' towards them. In the past, there has been too much violence because we have used our intelligence to develop weapons and make plans to destroy our neighbours," His Holiness mentioned.

“When we meet, we recognise another human being by their human face. If we met someone with a third eye it would be a real surprise. We are all physically similar in having one face, two hand and two legs. We should live according to our basic human nature, which is to be compassionate. Did the violence of the past build a better and safer world? —it did not. Therefore, we should make an effort to create a happier, more peaceful world. This means living happily together as brothers and sisters," the spiritual leader of Tibet said.

“I have had the opportunity to visit different countries on different continents and I found the same kind of human faces everywhere. Wherever I go, I smile and by and large people respond in a friendly way," His Holiness added.

“Peace will not fall from the sky. It depends on us developing a genuine sense of brotherhood and sisterhood. On a superficial level there are differences between us, but they are no grounds for fighting with others. We need to make a peaceful world free of weapons our goal. If disagreements arise, we must solve them by talking them through. Weapons are of no use," the Nobel laureate said.

“I want to encourage these young Indian boys and girls to keep ‘karuna’ and ‘ahimsa’ in mind. If you do so your lives will follow a positive direction. When you’re compassionate it automatically makes you smile," His Holiness the Dalai Lama said.

“When you get married, genuine love is very much connected with being able to smile. When money’s involved, marriage tends to be only temporary. And if you marry a politician, that also won’t last. But when two people marry because they both love each other, their marriage is long-lasting. Human beings tend to marry for life, especially if their relationship is rooted in a deep sense of loving kindness," His Holiness concluded.