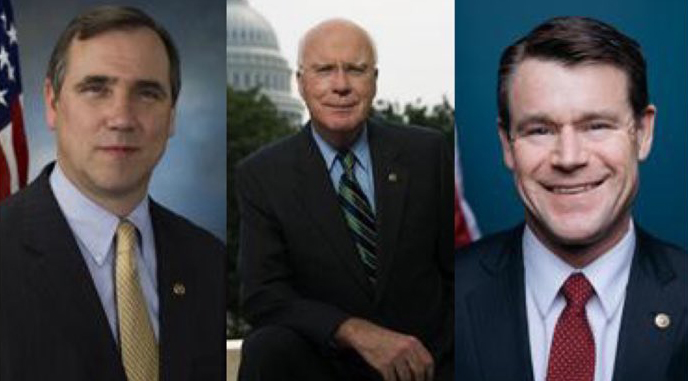 Washington DC — Senators Jeff Merkley, Todd Young and Patrick Leahy introduced a bill in the Senate on Tuesday entitled "The Promoting a Resolution to the Tibet-China Conflict Act", which would pressure China to resume negotiations with representatives of the Dalai Lama and reject as "historically false" China's claim that Tibet has been part of China since ancient times.

Senators Jeff Merkley (D-Ore.), Todd Young (R-Ind.) and Patrick Leahy (D-Vt.) introduced a bill in the Senate on December 20, 2022 entitled "The Promoting a Resolution to the Tibet-China Conflict Act". The bill was introduced in the house by Jim McGovern (D-Mass) and Michael McCaul (R-Texas), in July 2022.

Senator Jeff Merkley said: “America’s values supporting freedom and self-determination for all people must be at the center of all of our actions and relationships around the world—especially as the Chinese government pushes an alternative vision. This legislation makes clear that the United States views the Tibet-China conflict as unresolved and that the people of Tibet deserve a say in how they are governed. It sends a clear message to the People’s Republic of China: we expect meaningful negotiations over Tibet’s status and do not view current Chinese government actions as meeting those expectations.”

Senator Todd Young said: “The Chinese Communist Party’s (CCP) aggression towards Tibet is self-serving, with negotiations on the CCP’s terms. We must refresh U.S. policy towards Tibet, and push for negotiations that advance freedoms for the Tibetan people and peaceful resolution to the CCP’s conflict with the Dalai Lama. This bill demonstrates America's resolve that the CCP’s status quo – both in Tibet and elsewhere – is not acceptable.”

Senator Patrick Leahy said: “The Tibetan people, who have sought nothing more than good faith negotiations to resolve Tibet’s political status, have long been subjected to brutal persecution and their culture relentlessly attacked by the Chinese Government. This bill reaffirms that Tibet has never been part of China, and that U.S. support for the right of the Tibetan people to self-determination is unwavering.”

Penpa Tsering, the Sikyong (President) of the Central Tibetan Administration, said: “China’s rule in Tibet lacks historical support, it lacks popular support, and it lacks diplomatic support. Why is China asking nations to say that Tibet is part of the PRC [People’s Republic of China]? It is because China lacks legitimacy over Tibet. Tibetans simply want the same right to self-determination that all people deserve. We have suffered enormous abuse from the Chinese government over many decades, yet we have always sought to settle our differences through peaceful dialogue. This bill would allow the United States to back its consistent calls for dialogue with more force and urgency while helping give Tibetans a voice in their own country. We thank Senators Leahy, Merkley, and Young for introducing the Promoting a Resolution to the Tibet-China Conflict Act, which builds on the incredible bipartisan support the United States, has always shown for our just cause.”

The International Campaign for Tibet, an advocacy group based in Washington, DC and Europe that promotes human rights and democratic freedoms for the Tibetan people, said: “The fact that this bill has now been introduced on a bipartisan, bicameral basis demonstrates the American people’s broad support for His Holiness the Dalai Lama and the Tibetan cause. The people of the United States want justice and human rights in Tibet, and the Promoting a Resolution to the Tibet-China Conflict Act is a vital step toward achieving that goal through peaceful dialogue between the two sides.”

The Promoting a Resolution to the Tibet-China Conflict Act or Resolve Tibet Act, the bill will: