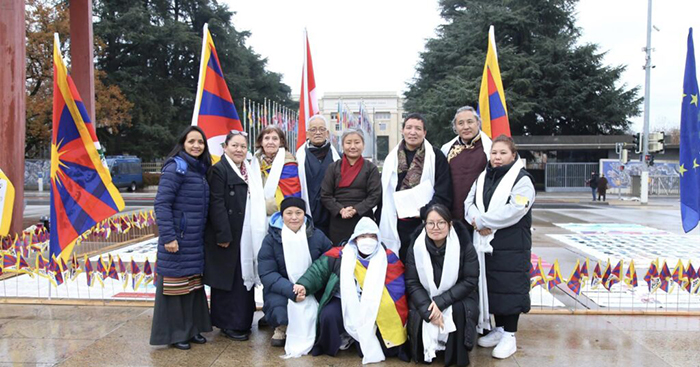 Geneva – Tibet Solidarity Movement group marked the 10th anniversary of the Tibet Solidarity Movement protest in Geneva, with 131 peaceful protests in 10 years since 2012. Aiming to urge the international community and the UN to take concerted action to protect the human rights of Tibetans in Tibet. They also asked the UNHCHR to urge China to end "colonial-style" boarding schools in Tibet.

The Tibet Solidarity Movement was initiated by five Tibetan families based in Switzerland in November 2011 to show solidarity with Tibetans inside, who continue to face China's repression in Tibet. Then, the Movement started its protest in front of the UN building in Geneva on December 10, 2012. Since then, they have gathered in front of the UN building in Geneva every second Wednesday of every month for the past decade with banners highlighting the human rights violations in Tibet with Tibetan national flags and Swiss and EU flags around.

Representative Thinlay Chukki, accompanied by Kalden Tsomo from the Tibet Bureau in Geneva, visited the event site to acknowledge and express their appreciation to the members of the Tibet Solidarity Movement. Tibetan activists, in coordination with the Tibet Bureau in Geneva, submitted an appeal letter to the Office of the UN High Commissioner for Human Rights, asking the UN to pay attention to the degrading situation of Tibetans in Tibet and to take more concerted action to protect the human rights of Tibetans, and urge China to resolve the Sino-Tibetan conflicts by resuming a process of genuine and effective dialogue with the envoys of His Holiness the Dalai Lama, and to immediately end "colonial-style" boarding schools in Tibet and allow Tibetan children to learn the Tibetan language and cultural identity.

The letter to Mr Volker Türk, UN High Commissioner for Human Rights, states, “Today, we are holding the 131st demonstration, which is taking place every second Wednesday, in front of the Place des Nations with renewed hope and more determination to speak for our brothers and sisters who are forced to remain silent under the totalitarian regime of People’s Republic of China.”

“The situation in Tibet has become worse from bad. With deep respect and optimism, despite challenges to remain hopeful in all these difficult years, we write this appeal letter to urge your attention and initiative in addressing the deteriorating situation of Tibetan people. For over six decades now, every facet of fundamental rights in Tibet have been systematically violated by China since its illegal occupation in 1959,” the letter continued.

“Tibetans have expressed their dissent and urge the government of China to allow Tibetans to live as a Tibetan with its centuries old Tibetan Buddhist culture, identity and thought. However, every single peaceful expression of cultural identity and thoughts are brutally suppressed and brought more arbitrary arrests, enforced disappearances, unjust prison sentences, torture and death in custody. Due to which, since 2009, over 157 Tibetans in Tibet have resorted to drastic acts of self-immolation protests calling for Freedom in Tibet and return of His Holiness the Dalai Lama to Tibet,” the letter added.

“Tibetans from all walks of life from monastic community to nomads; singers and writers; students and scholars; environmentalists and philanthropists are persecuted and criminalized for merely exercising the rights enshrined in the Universal Declaration of Rights (UDHR) and asserting their rights to live as a Tibetan with cultural, religious and linguistic identities. Tibetan environmentalists and rights defenders are silenced, suppressed and sentenced under trumped-up charges of “inciting separatism.” Tibetan children are forcibly taken away from their family, culture and language and raised in a “colonial-style” boarding school making them strangers in their own land and alien to their own roots,” the letter stated.

• Urge China to resolve the Sino-Tibet conflicts by resuming genuine and effective dialogue process with envoys of His Holiness the Dalai Lama;
• Press China to stop state led assimilatory policies and stop egregious human rights violations in Tibet;
• Press China to allow Tibetans and Tibetan Buddhist community to identify and recognize their religious leaders;
• Urge China to immediately stop “colonial-style” boarding schools in Tibet and allow Tibetan Children to learn Tibetan language and its cultural identity;
• Bring Tibet on agenda while assessing violations of human rights by China and report on the same.