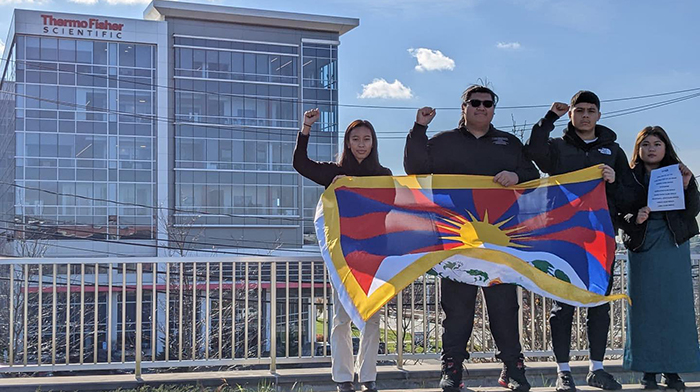 Activists from Students for a Free Tibet demonstrate against Thermo Fisher Scientific in front of its building on December 6, 2022. Photo: file

Washington – Commissioners of the Congressional-Executive Commission on China (CECC) and Tibetans demand answers from the US company (Thermo Fisher Scientific) about the supply chain related to China's mass collection of DNA in Tibet and the involvement of its products in human rights violations in Tibet.

The Commissioners of the bicameral, bipartisan Congressional-Executive Commission on China (CECC) sent a letter to Marc Casper, Chairman and CEO of Thermo Fisher Scientific, on December 15, 2022, expressing concern that the use of his company's products for mass DNA collection in Tibet, which “could enable further gross violations” of the human rights of ethnic minorities in China.

Students for a Free Tibet, Free Tibet, the International Tibet Network, the Tibetan Association of Boston, and Tibetan activists and supporters demand that Thermo Fisher Sceintific answer the question of whether Thermo Fisher Sceintific's products involve the mass collection of DNA from Tibetans, even as young as four years old, and call on the company to stop selling the kits that involve human rights abuses in Tibet.

“Since October, Tibet groups have contacted the company on multiple occasions, requesting a meeting with Thermo Fisher CEO Marc Casper and for detailed responses to questions about the company’s knowledge of equipment sales to police in occupied Tibet and what steps the company has taken to prevent misuse of its products,” the organisations stated.

“Tibet groups’ concerns are driven by growing evidence that Chinese police in occupied Tibet are carrying out a mass DNA collection programme under the pretext of “crime prevention”. Over one million Tibetans have been specifically targeted under this programme which amounts to ethnic profiling. Children as young as five years old have been required to give DNA samples and in one Tibetan municipality, corroborated reports show that at least 69% of the Tibetan community have had their data collected,” they added.

“China’s mass DNA harvesting in Tibet is one of the great horrors of our time. Imagine a place where your every move is tracked on camera, you are monitored by police on the street, and spies listen in on your phone calls and read your Internet messages. This intolerable surveillance is now being taken to new extremes with over a million Tibetans, including young children, forced to submit DNA samples to their oppressors. In occupied Tibet, privacy does not exist,” said Kelsang Phuntsok, President of the Tibetan Association of Boston.

“Thermo Fisher has so far not acknowledged the request to meet Marc Casper or offered a genuine response to the requests for information or key concerns. In a response to one joint letter - signed by over 120 global Tibet groups - Thermo Fisher Vice President, Sandy Pound, instead suggested that the DNA kits were being used by Chinese police forces in occupied Tibet to further ‘criminal casework’ and help track down ‘criminals’,” the activists said.

“Thermo Fisher Scientific has so far responded to our requests for information and a meeting by stalling, while the company’s CEO Marc Casper is nowhere to be seen. The police in occupied Tibet are not there to solve crimes, they are there to put Tibetans under constant surveillance, crackdown on dissent and interrogate political detainees. The burden of proof that Thermo Fisher Scientific’s products are not being used by the Chinese police in a campaign of biometric repression rests solely with the company. Thermo Fisher Scientific must do the right thing - the company must investigate its supply chains, ensure products are not being used for mass surveillance, and be open to listening to the voices of stakeholder communities such as those from the Tibetan community,” said Pema Doma, Executive Director, Students for a Free Tibet.

“There are two possibilities here - Thermo Fisher Scientific is either ignorant about what is going on in occupied Tibet or it does not care. Either way, the company and its CEO Marc Casper should listen to Tibetans who are free to speak and ensure that their DNA kits do not reach a police force that has forced over a million Tibetans to submit DNA samples, and with it, what remained of their personal privacy. We have been contacting Thermo Fisher Scientific and visiting their offices because all of their staff—from the CEO to the scientists who make these products—should be asked the question: do you want your products to be used to harass and monitor an occupied people?,” said John Jones, Head of Campaign, Policy and Research at Free Tibet.

The Bipartisan letter (https://www.cecc.gov/media-center/press-releases/commissioners-ask-thermo-fisher-if-products-involved-in-human-rights) to Marc Casper, the President of Thermo Fisher Scientific, writes: " We are writing to express our concerns that your company’s DNA kits and replacement parts for sequencers were sold directly to police in the Tibet Autonomous Region (TAR) in the People’s Republic of China (PRC). Sales of replacement parts implies that security authorities in the TAR already possess your company’s DNA sequencers as well. As you may know, the bipartisan leadership of the Congressional-Executive Commission on China has taken a keen interest in the U.S. exports that facilitate the PRC’s mass biometric collection and surveillance efforts, in particular after the September 2022 report by Toronto-based Citizen Lab which found that between June 2016 and August 2022 police in the TAR collected between roughly 900,000 and 1.2 million DNA samples. There are so few safeguards for how DNA is gathered and used in the PRC that we are alarmed that U.S. companies, including Thermo Fisher Scientific, may be wittingly or unwittingly aiding or abetting human rights abuses."

“We hope that Thermo Fisher will apply these values, ethics code and policies to a rigorous review of the reported use of your products and equipment in the TAR, and that your company will takes steps to stop further use. A June 2021 New York Times investigation which found that police in the XUAR police were still purchasing equipment made by Thermo Fisher and another U.S. company strongly suggests that the safeguards that have been employed by the company are not sufficient,” they said.

“We do not yet know what Chinese authorities intend to do with the information they obtain from the mass collection of Tibetan DNA. The Congressional-Executive Commission on China has extensively monitored the policies and methods that PRC security forces have employed to exert intrusive social controls over minority populations like Uyghurs and Tibetans. We fear that DNA collection could enable further gross violations of their human rights,” the MPs added.

The letter ended with the following questions and required answers: