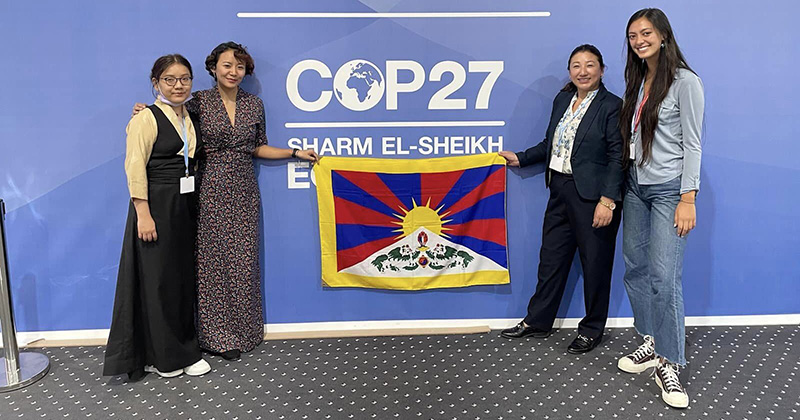 Sharm El Sheikh, — At the 27th UN Climate Change Conference in Egypt, a delegation of five Tibetan women met with leaders from different countries to raise awareness about the importance of the Tibetan environment and the major rivers of Tibet for neighbouring countries and the world, as well as the climate crisis in Tibet and the fact that China's environmental policies are destroying Tibetan nature.

The delegation of Tibet climate researchers and advocates from the Central Tibetan Administration (CTA), the International Tibet Network, Tibet Watch and Students for a Free Tibet is participating in the 27th UN Climate Change Conference or COP27, which is being held from 6 to 18 November 2022 in Sharm El Sheikh, Egypt. The delegations aim to raise and discuss the climate crisis in Tibet and the Chinese occupation of Tibet which threatens Tibet's environment and the climate crisis.

Till now, they met with Ursula von der Leyen, the President of the European Commission, Mr Thomas Pojar, the Advisor for Foreign and Security Policy to the Prime Minister of the Czech Republic, Dr Martin Bursik, the Advisor for the Czech Republic for COP27, and Mr Michal Nekvasil, Czech Presidency of the Council of the European Union and Shri Bhupender Yadav, the Indian Union Minister of Environment, Forest and Climate Change.

Dhondup Wangmo said," The world needs to know that climate change on the Tibetan Plateau will not affect Tibet alone, but will also have negative consequences on the world and South East Asia in particular. The availability of the cryosphere of Tibet is an integral part of providing water to more than ten countries downstream, fulfilling the water needs of around 1,9 billion people. Glacier and permafrost degradation are not just affecting Tibet; the whole world will be impacted by water availability and air pollution issues."

Dr Lobsang Yangtso said, "Tibetans are at the frontline of the global climate crisis. However, since Tibet is an occupied country, Tibetans do not have an official representation at the COP meetings. It is extremely urgent that local Tibetan communities are included in global climate policy-making and that these discussions are overall more inclusive. Moreover, the international community needs to acknowledge the significance of Tibetan traditional knowledge of climate action, and their practices and belief systems."

"Tibetans have for so long expressed their deep connection to their land and country through songs, prayers, and protests. The colonization of Tibet resulted in severing that connection through a myriad of so-called "civilising" and extractivist models of economic development. We can not overlook the importance of Tibetans and their desire for freedom when we address Tibet's climate crisis," said Tenzin Choekyi.

"Anyone concerned about climate change should care about the Tibet Climate Crisis. Home to the largest store of fresh water outside the North and South Poles, Tibet's environment provides water for over 1.4 billion people. At the same time, Tibet is warming up to three times faster than the global average. While Tibetans inside Tibet are on the frontlines of the climate crisis, they are persecuted for defending their environment. As Tibetans in exile at COP 27, we are bringing the underrepresented Tibetan voice into the climate movement," said Khenzom Alling.

Pema Doma says, “advocating for Tibet and its environment has been both a positive and negative experience. On the one hand, I have found that many young climate activists are eager to fight Chinese government occupation and stand with Tibetans inside Tibet. However, I have also experienced too many climate groups who are willing to throw Tibetans under the bus for the sake of collaboration with China on climate issues. Despite these disappointments, though, I am still hopeful that the global climate movement will heed the voices of Tibetans and stand with us against China’s degradation of our homeland.’’