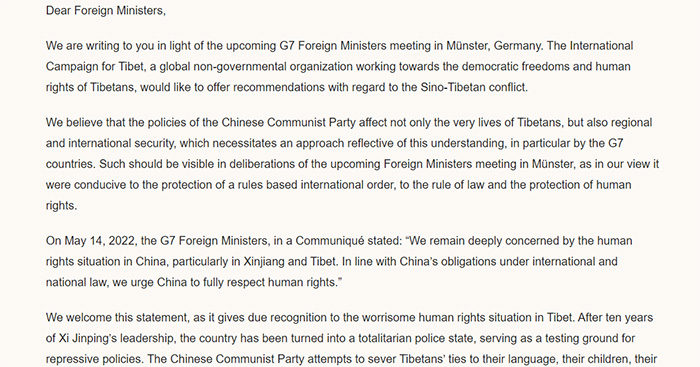 The letter of ICT to Foreign Ministers of G7 on November 2, 2022. Photo: file

Washington, DC – International Campaign for Tibet (ICT) wrote to the G7 Foreign Ministers urging them to raise the issue of Tibet at their upcoming meeting in Münster, Germany, and said: " We would like to recommend to include into a G7 Foreign Ministers Communiqué the relevance of protecting the rights of Tibetans, and others under Chinese Communist Party rule, to the security of the region and to conflict prevention and resolution, and to call for the Chinese government to address the legitimate grievances of Tibetans in particular."

The ICT wrote a letter to the G7 Foreign Ministers of Canada, France, Germany, Italy, Japan, the United Kingdom, the United States of America and the High Representative of the European Union on November 2, 2022, ahead of the next G7 Foreign Ministers' meeting in Münster, Germany, on November 3-4, 2022, urging them to raise the issue of Tibet and the importance of Tibetan rivers to prevent future regional and international water conflicts.

In the letter to the foreign ministers, ICT said: “We are writing to you in light of the upcoming G7 Foreign Ministers meeting in Münster, Germany. The International Campaign for Tibet, a global non-governmental organization working towards the democratic freedoms and human rights of Tibetans, would like to offer recommendations with regard to the Sino-Tibetan conflict.”

They mentioned that Chinese policies affect not only Tibet, but also neighbouring countries and international security, the letter said, “We believe that the policies of the Chinese Communist Party affect not only the very lives of Tibetans, but also regional and international security, which necessitates an approach reflective of this understanding, in particular by the G7 countries. Such should be visible in deliberations of the upcoming Foreign Ministers meeting in Münster, as in our view it were conducive to the protection of a rules based international order, to the rule of law and the protection of human rights.”

ICT welcomed the statement of G7 foreign minister on May 14, 2022, which stated: “We remain deeply concerned by the human rights situation in China, particularly in Xinjiang and Tibet. In line with China’s obligations under international and national law, we urge China to fully respect human rights.”

“We welcome this statement, as it gives due recognition to the worrisome human rights situation in Tibet. After ten years of Xi Jinping’s leadership, the country has been turned into a totalitarian police state, serving as a testing ground for repressive policies. The Chinese Communist Party attempts to sever Tibetans’ ties to their language, their children, their way of life, their Buddhist culture and to their spiritual leader His Holiness the 14th Dalai Lama. The international community must not accept this willful, systematic, and harshly executed eradication of the Tibetan culture. It should recognize that the Chinese Communist Party policies towards Uyghurs, Tibetans, Hongkongers and Chinese, towards Mongolians, and others are interconnected. It should act, and consider tangible measures to address the situation in Tibet. It should be understood that inaction towards the Chinese Communist Party’s policies in Tibet has emboldened the Party to further pursue its aggressive policies,” the letter added.

“We would therefore like to recommend to once again include the human rights situation in Tibet into a G7 Foreign Ministers Communiqué, and to stress the need for unfettered access to Tibet for independent monitoring, and for independent media and civil society organisations,” they said.

“In this light, the situation in Tibet and elsewhere should be viewed as relevant to regional and international security. This concerns not only the protection of human rights, but also the implications of aggressive policies pursued by the Chinese Communist Party with regard to bordering countries such as India, Nepal and Bhutan. More so, as the Tibetan Plateau is the source of Asia’s major rivers and supplies more than a billion people downstream with fresh water, we are concerned that aggressive resource related policies of the Chinese Communist Party will lead to regional conflict. On the contrary, if Tibetans were included in what should be a participatory and inclusive resource policy, this would with no doubt have a moderating and preventative effect on Chinese Communist Party policies. We would like to stress, in this context, that it is our conviction that the current assertive policies of the Chinese Communist Party are a direct result of the lack of self-determination of Tibetans. An unresolved Sino-Tibetan conflict represents a threat for regional and international security,” ICT said.

They urged the G7 to include the protection of the human rights of Tibetans and others in their statement and said, “We would therefore like to recommend to include into a G7 Foreign Ministers Communiqué the relevance of protecting the rights of Tibetans, and others under Chinese Communist Party rule, to the security of the region and to conflict prevention and resolution, and to call for the Chinese government to address the legitimate grievances of Tibetans in particular.”