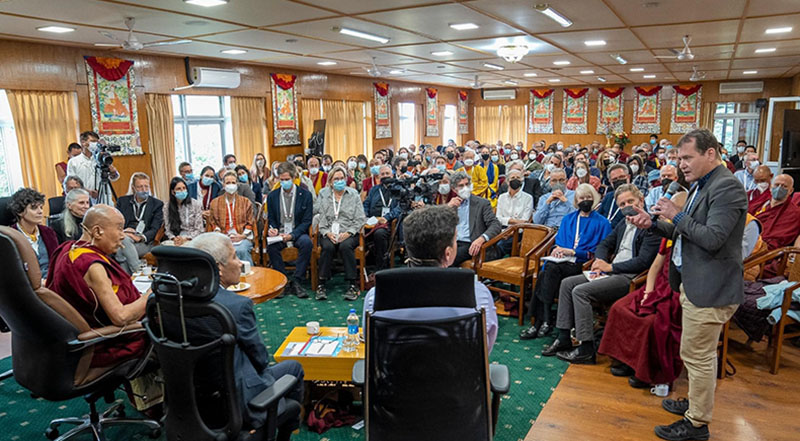 His Holiness the Dalai Lama with scientists and others at the Mind & Life conversation in Dharamshala on October 12, 2022. Photo: OHHDL

Dharamshala, India — His Holiness the Dalai Lama and an anthropologist, a psychologist, a philosopher of the mind, and a cognitive scientist discussed the topics of Interdependence, Ethics and Social Networks for two days in Dharamshala. His Holiness told them, “We have to let people know that warm-heartedness is the source of peace of mind, of inner peace, inner strength and self-confidence. I rely on your efforts to share this with others.”

His Holiness the Dalai Lama and about 180 people, including scientists, monks and nuns, participated in the Mind & Life Conversation on Interdependence, Ethics, and Social Networks in Dharamshala on October 12 to 13, 2022. Of the participants, 101 were members or friends of the Mind & Life Institute. The rest were Tibetan monks and nuns who have participated in Emory University's science programs, as well as science students from the Men-tsee-khang, the Library of Tibetan Works & Archives, etc., and lamas and abbots from the learning centres of the major monasteries in South India.

“We have held a lot of Mind & Life dialogues, and I feel they have been very important. In the world at large, a great deal of attention has been paid to physical things, but much less to the mind. And yet, when we talk about happiness and suffering, they are inner, mental experiences. If we have no peace of mind, we won’t be happy,” His Holiness said.

“Many of the conflicts we see in the world are about physical things, material resources and power. Therefore, we need to look at what went on in the past and learn from it so that we can construct a future based on peace, happiness, and togetherness,” he added.

“The root of peace of mind is compassion. As soon as most of us are born our mothers take care of us and give us our first lessons in compassion. Without this, we would not survive. This is how our life begins. As children, we grow up in an atmosphere of compassion. We unhesitatingly play with our neighbours’ children. When I was small, I played with Muslim and Chinese children from nearby without giving it another thought. We all smiled and readily played together. The key factor to such good relations is warm-heartedness,” His Holiness continues.

“It seems to me we neglect something in our education. Experience shows us that the more compassionate we are, the more we achieve inner peace and with it inner strength. Although in our lives we depend on so many other people, there’s little place for such human values in modern education,” he stated.

Professor Richard Davidson introduced the conference and the participants by saying, “How good it is to be among new friends and old friends. Our presenters include an anthropologist, a psychologist, a philosopher of mind and cognitive science and a cognitive scientist researching human behaviour, social systems, and so forth.”

“We have lately seen various changes in the world that include climate change and an increase in depression. Since the pandemic, it has become clear that loneliness is a greater threat to health than obesity. We need to give greater acknowledgement to our interconnectedness. We want to explore what it means to be a social animal, and how we can overcome polarization, which poses such a threat to democracy. We want to investigate the pitfalls of interconnectedness in relation to AI (artificial intelligence). We want to make this world a better, kinder place,” he added.

“I speak on behalf of all my colleagues here in thanking you, Your Holiness, for your dedication to meeting us scientists and scholars over the last 35 years. Our meetings have had great impact. Please live long and in good health,” prof Davidson said.

Then His Holiness the Dalai Lama said, “Peace of mind is important, even if only for its contribution to good health, It brings self-confidence and freedom from fear. Perhaps brain specialists can shed some light on this. I understand that good sleep and dreams can affect the brain positively and peace of mind facilitates this.

“I have faced turbulence in my life, but I have also studied psychology as presented in the Nalanda Tradition and found it very helpful,” the Spiritual leader of Tibet said.

“We have to let people know that warm-heartedness is the source of peace of mind, of inner peace, inner strength and self-confidence. I rely on your efforts to share this with others,” he continues.

“When it comes to the start of a human life, the meeting of the physical factors doesn’t necessarily result in a conception. A third factor is consciousness. And for this reason, it would be worthwhile investigating what consciousness is,” he said.

“Trying to account for the origin of a person’s life only on the basis of their body would be difficult and unsatisfactory. We observe that twins, despite sharing a physical origin in the same womb, display differences in their personal characteristics,” His Holiness explained.

“The nature of consciousness is said to be clarity and awareness and it is difficult to argue that this is a product of the brain,” he said.

“Our friendship has not come about as a result of one or two meetings, we have been friends for a long time. We share a genuine friendship based on trust,” His Holiness said.

“I became a refugee here in India. I lost my country. But then I met people from so many other places and felt happy to be part of this world. I also want you to know that for the Tibetans in Tibet, friends of the Dalai Lama are friends of Tibet. In my homeland, there is a deep appreciation of our good relations—and in the end, we believe the truth will prevail,” the Spiritual leader of Tibet concluded.