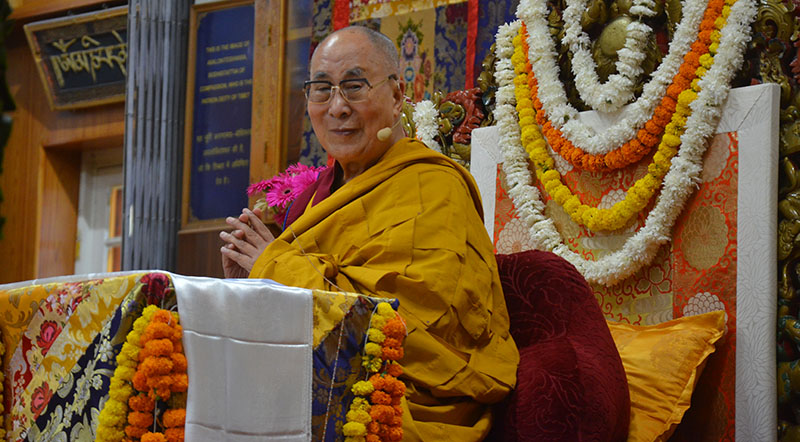 His Holiness the Dalai Lama of Tibet. Photo: TPI/Yangchen Dolma

Dharamshala, India — His Holiness the Dalai Lama, the Nobel Peace Prize Laureate, congratulates the recipients of 2022 the Nobel Peace Prize and said, "By recognising their contribution, the Nobel Committee has shone a clear light on the importance of civil society in promoting fundamental human values of peace, freedom and democracy."

“Each of them, recognises that all human beings have a right to freedom from want and freedom from fear and that human rights are inclusive, interdependent and universal," His Holiness the Dalai Lama wrote.

“By recognizing their contribution, the Nobel Committee has shone a clear light on the importance of civil society in promoting fundamental human values of peace, freedom and democracy," the Nobel Peace Prize Laureate stated.

“Of the many problems we face today, some are natural calamities and must be accepted and faced with equanimity. Others are of our own making, created by misunderstanding and can be corrected. Among these problems are those that arise from a conflict of ideology, political or religious, when people fight each other for petty ends, losing sight of the basic humanity that binds us all together as a single human family," the spiritual leader of Tibet said.

“Today, the values of democracy, open society, respect for human rights, and equality are becoming recognized as universal values. There is an intimate connection between democratic values and the fundamental values of human goodness. Where there is democracy there is a greater possibility for citizens to express their basic human qualities. Where these basic human qualities prevail, there is also a greater scope for strengthening democracy. Most important of all, democracy is also the most effective basis for ensuring world peace," His Holiness added.

“Across the world, our rich diversity of cultures and religions should help to strengthen fundamental human rights in all communities. Underlying this diversity are basic human principles that bind us all together in the oneness of humanity. The question of human rights is so fundamentally important that there should be no difference of views about it. We all have common human needs and concerns. We all seek happiness and try to avoid suffering regardless of our race, religion, gender or social status," His Holiness said.

“I welcome the three recipients of this year’s Nobel Peace Prize to the fellowship of Nobel Peace Laureates. It is my hope that this award will serve as an inspiration for all, reminding us that addressing problems through dialogue and with humanity will bring all parties to a happy and mutually beneficial solution,” His Holiness the Dalai Lama concluded.

"The Peace Prize laureates represent civil society in their home countries. They have for many years promoted the right to criticise power and protect the fundamental rights of citizens. They have made an outstanding effort to document war crimes, human rights abuses, and the abuse of power. Together they demonstrate the significance of civil society for peace and democracy," Nobel Committee explained.

"By awarding the Nobel Peace Prize for 2022 to Ales Bialiatski, Memorial and the Center for Civil Liberties, the Norwegian Nobel Committee wishes to honour three outstanding champions of human rights, democracy and peaceful co-existence in the neighbour countries Belarus, Russia and Ukraine. Through their consistent efforts in favour of humanist values, anti-militarism and principles of law, this year’s laureates have revitalised and honoured Alfred Nobel’s vision of peace and fraternity between nations – a vision most needed in the world today," Nobel Committee stated.