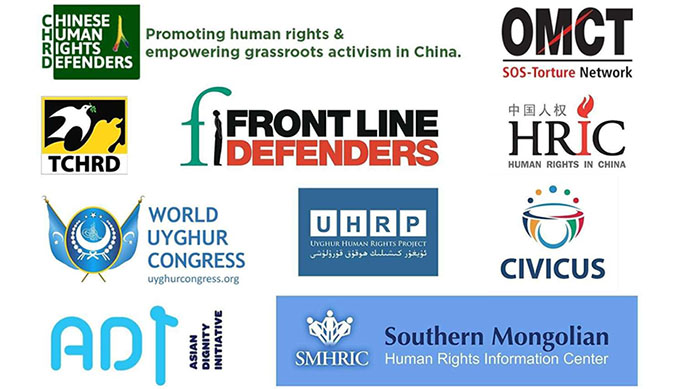 Dharamshala, India – Ten human rights groups from Tibet, China, East Turkestan, Southern Mongolia, and other write a joint open letter to Chinese President Xi Jinping calling on him to submit the nearly three-year overdue state party report to the UN Committee against Torture, stating, " the PRC’s refusal to comply with the rules that they voluntarily agreed to (by signing and ratifying the Convention) undermines the fight for human rights on a global scale.“

The Human rights groups blame the delay on the Chinese Communist Party's state report on torture in China and say, "Almost three years have passed since the due date (9 December 2019) of the PRC’s latest State party report to the UN Committee Against Torture. We are writing on behalf of the people in the PRC, and human rights defenders worldwide, to request the submission of the above-mentioned report without further delay."

"In its Concluding Observations on the PRC’s fifth periodic report issued in 2016, the Committee had requested the State party to submit its sixth periodic report by 9 December 2019, and reiterated its concerns about torture and ill-treatment taking place during prolonged pre-trial and extralegal detention; enforced disappearances on the pretext of ‘residential surveillance at designated locations’; and deaths in custody. Reiterating its previous recommendations to the PRC on including a comprehensive definition of torture in its legislation, the Committee had expressed concern that “serious discrepancies between the definition in the Convention and that incorporated into domestic law create actual or potential loopholes for impunity”.

"Moreover, the PRC has yet to ratify the Optional Protocol of the Convention despite receiving repeated recommendations from the Committee to withdraw all reservations and declarations to the Convention," the Human Rights Groups said.

"Such unwillingness to fulfill its international obligations implies that the PRC is seeking to evade its responsibility to protect human rights within its territory. This rationale can be supported by countless testimonies of the occurrence of torture in extrajudicial and pre-trial detention facilities in Tibet, Uyghur people in East Turkistan, and Han Chinese where discretionary and extrajudicial powers have been granted to the police and security agencies to deny basic human rights to political detainees," the joint letter stated.

While Speaking about the cruel situation of human rights defenders and political prisoners in China and Tibet, they said, "Many political prisoners, including human rights defenders, continue to die as a result of torture and ill-treatment at the hands of police and state security agents. In Tibet, this phenomenon has been illustrated by the cases of Norsang in 2019, and Lhamo in 2020. To avoid being held responsible for deaths in custody, prison authorities tend to release prisoners once they have reached near-death conditions, as illustrated by the cases of Gangbu Rikgye Nyima, released one year early in failing health; Gendun Sherab, who died in 2020 due to torture injuries; Choekyi, who died in 2020 after being released five months early; Tenzin Nyima, who was released early in a comatose state and died shortly after; and Kunchok Jinpa, who passed away in 2021 after being transferred to hospital mid-sentence. In East Turkistan, Uyghurs have been rounded up by Chinese police and detained against their will in large internment (“re-education”) camps where they have been subjected to arbitrary detention, enforced disappearance, political indoctrination, torture, and other serious human rights violations. Overall, by refusing to submit the State party report, the PRC is shielding itself from external criticism and scrutiny that would follow in the form of stakeholders’ responses,"

The ten human rights groups criticised the Chinese government's failure to report on the human rights situation in China, Tibet, Uyghur and Southern Mongolia, saying, "Furthermore, PRC’s negligence also weakens the international accountability and monitoring mechanisms essential to the functioning of the UN. In this respect, the PRC’s refusal to comply with the rules that they voluntarily agreed to (by signing and ratifying the Convention) undermines the fight for human rights on a global scale. Extensive delays in submitting its state party reports undermine China’s ability to effectively address the serious human rights violations."