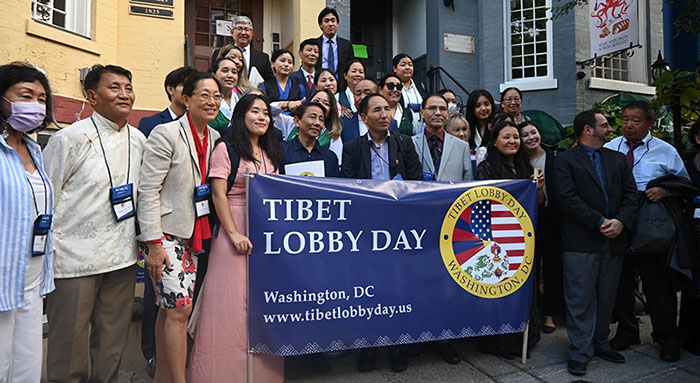 Washington, DC — More than 100 Tibetan Americans and Tibet supporters from 23 U.S. states visited Washington, D.C. to meet with members of Congress and push for passage of the Promoting Resolution to the Tibet-China Conflict Act, a bipartisan bill that Representatives Jim McGovern, D-Mass, and Michael McCaul, R-Texas, introduced in the House of Representatives in July, 2022.

The Tibet Lobby Day is organised by the International Campaign for Tibet in collaboration with Students for a Free Tibet and Tibetan organisations in the US. More than 100 Tibetan Americans and Tibet supporters from 23 states and the District of Columbia attended the Tibet Lobby Day at the U.S. Capitol on September 22-23 to meet with senators, representatives, and congressional staff.

“This important advocacy event, now in its 14th year, is an opportunity for you to tell your elected representatives in Congress that you want them to stand up for Tibet. We have seen real, concrete results from the power of citizen advocates to help the Tibetan people,” said McGovern to Tibet lobby day participants in a video.

“After holding Tibet Lobby Day virtually the past two years due to COVID-19, it will be wonderful to see so many of our fellow Tibetan Americans and Tibet supporters in person in Washington, DC once again. At the same time, all of us know we have important work to do to extend the US government’s decades of bipartisan support for Tibet, and we look forward to many impactful meetings with our elected leaders,” said Tencho Gyatso, Interim Vice President of ICT.

The Promoting a Resolution to the Tibet-China Conflict Act or Resolve Tibet Act, the bill will:

“This legislation will position the United States to more forcefully encourage China to address the unresolved issue of Tibet, which is only possible through genuine negotiations with the Dalai Lama and the elected Tibetan leaders in exile,” said Franz Matzner, Director of Government Relations of ICT.

“Since its introduction just two months ago, the Resolve Tibet Act has already received impressive support from Congressional leaders. This Tibet Lobby Day will be vital for putting the bill on President Biden’s desk. With Tibetans facing unprecedented oppression, it is critical that the United States consistently demand that the CCP return to the negotiating table without poison-pill conditions,” he added.

“The Resolve Tibet Act builds on recent momentum in US legislation on Tibet, including the passage of the Tibetan Policy and Support Act of 2020 and the Reciprocal Access to Tibet Act of 2018,” ICT mentioned.