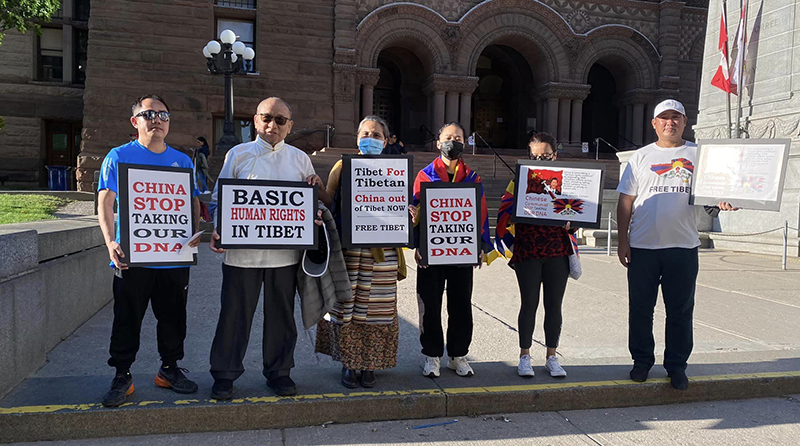 RTYC of Toronto organised a protest against the Chinese authorities' collecting a mass DNA from Tibetans cross the Tibet, on September 14, 2022, at Old City Hall, Toronto, Canada. Photo: RTYC

Regional Tibetan Youth Congress of Toronto (RTYC of Toronto) organised a protest against the Chinese authorities' collecting a mass DNA from Tibetans crossing Tibet, even from five-year-olds, on September 14, 2022, at Old City Hall, Toronto, Ontario, Canada.

Several Tibetan activists from the Regional Tibetan Youth Congress in Toronto organised a protest against the mass collection of DNA from Tibetans by the Chinese authorities, and raised awareness of the issue of mass collection of DNA from Tibetan children by the Chinese authorities to the international community and the world.

The activists hold banners and shout: "China stops collecting DNA from Tibetans, basic human rights in Tibet, Tibet for Tibetans, China out of Tibet now". One of the banners reads, "China is committing a grave human rights violation by expanding its DNA collection efforts in Tibet, including blood samples from children as young as five years old."

The US-based Human Rights Watch released a report on September 5, 2022, on the Chinese government's mass collection of DNA from Tibetans as young as five years old throughout Tibet. Human Rights Watch identified reports of collections in 14 separate locations (1 prefecture, 2 counties, 2 cities, 2 townships, and 7 villages) in the region's seven prefectures, indicating that collections are taking place, or will take place, throughout the region.

"Coercing people to give blood samples, or taking blood samples without informed, meaningful, and freely given consent or justification, can violate an individual’s privacy, dignity, and right to bodily integrity. Compelled DNA sampling of an entire region or population for security maintenance is a serious human rights violation, in that it cannot be justified as necessary or proportionate,” Human Rights Watch said.

“The available information indicates that people cannot decline providing their DNA and that police do not need credible evidence of any criminal conduct. A report from Lhasa municipality in April 2022 stated that blood samples for DNA collection were being systematically collected from children at kindergartens and from other local residents. A report from a Tibetan township in Qinghai province in December 2020 stated that DNA was being collected from all boys aged 5 and above,” the report stated.

Regarding the report, Under Secretary for Civilian Security, Democracy, and Human Rights and US Special Coordinator for Tibetan Issues, Uzra Zeya said, “Deeply disturbed by recent reports documenting involuntary, mass DNA collection throughout Tibet, including from children as young as 5 years old. We call on the PRC to stop these repressive policies and respect the fundamental freedoms of Tibetans,” on its official Twitter account, September 8, 2022.