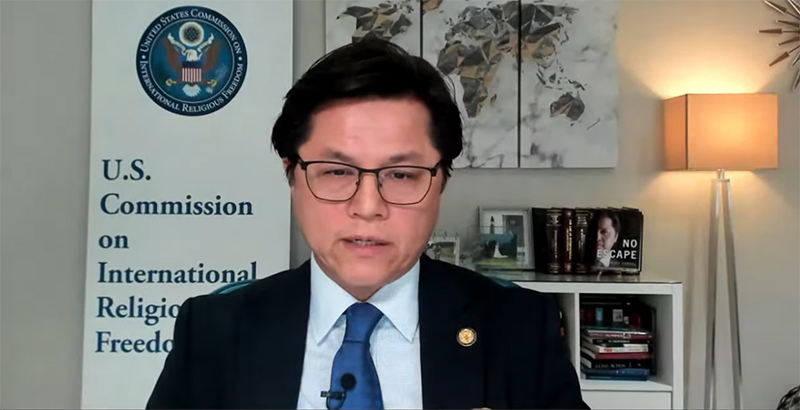 Washington, D.C — Congressional-Executive Commission on China held a hearing entitled Control of Religion in China through Digital Authoritarianism on Tuesday and Nury Turkel, the Chair of the U.S. Commission on International Religious Freedom said, "Ethnic minority regions of Tibet and Xinjiang, in particular, have borne the brunt of the CCP’s technology-enhanced brutality in recent years, as the China Commission has well documented."

“Today’s hearing will focus on new and insidious methods authorities are using to exert control over religious practice, including online regulation and digital surveillance technologies. In this light, I hope the witnesses will expand on the meaning of “Sinicization” of religion – a process to coerce religious believers’ allegiance to the state and the Party,” said Representative James McGovern.

“For decades, the ruling Chinese Communist Party (CCP) has placed religion under tight, comprehensive, and coercive control. It exercises control by using arbitrary laws and regulations and implementing them through a complex but sophisticated web of Party and government agencies at all levels, including the CCP’s United Front Work Department, State Administration for Religious Affairs, and China’s Public Security and State Security apparatus,” said Nury Turkel, Chair of the USCIRF.

“The crackdown on religion has become increasingly harsh in recent years under the brutal rule of CCP leader Xi Jinping, leading some experts to call his decade-long reign the “bitter winter for religious freedom in China” he noted.

“This new regulation has a particularly significant and adverse impact on independent, unregistered religious communities. Due to the government’s severe persecution, many of them rely on online platforms and resources for religious education and training, religious gatherings and worship, and other religious activities. These online platforms and smartphone apps are often the only viable means through which these religious communities can carry out activities and connect with one another, especially during the strict COVID-19 lockdowns,” Turkel said.

“The negative impact of this regulation is already being felt across China since it went into effect in March 2022. Chinese authorities have recruited hundreds, if not thousands, of auditors to target and censor religious content on the Chinese internet. Christian and Tibetan Buddhist groups have reported that their websites and WeChat virtual groups were shut down and are no longer accessible. USCIRF is concerned that this regulation will lead to more persecution and abuses, especially for groups with foreign connections,” he added.

“This new regulation is the latest example of the CCP expanding and refining its techno-authoritarianism toolkit at home, as it tries to intimidate and coerce its own citizens to perpetuate its rule. Ethnic minority regions of Tibet and Xinjiang, in particular, have borne the brunt of the CCP’s technology-enhanced brutality in recent years, as the China Commission has well documented,” said the Chair of the USCIRF.

"Under General Secretary Xi Jinping, strategies of religious management have expanded with the development of digital and surveillance technologies. These technologies facilitate systematic and coordinated efforts to collect information, monitor, and target religious groups and practitioners, especially those perceived as operating outside of state-set parameters or viewed as security threats, " said Dr Karrie J. Koesel, Associate Professor of Political Science, University of Notre Dame

"The Chinese surveillance state monitors social media to identify and collect information on religious believers and their networks; it tracks phone apps that transmit information on user activity and location; it utilizes facial recognition technology to follow movement; and relies on an impressive array of CCTV cameras at temples, churches, and mosques to keep tabs on attendance and the content of religious services," said Dr Koesel.

"Recent measures regulating religious information online bring religious communities in compliance with other laws on Internet security. Religious associations, schools, and monasteries must obtain a license for maintaining websites and online religious content must be approved by government representatives at provincial religious affairs departments," she said.

"The Buddhist plan for Sinicization prioritizes the study and implementation of Xi Jinping Thought. Religious personnel are urged to accept and support the leadership of the party-state and promote Buddhist teachings in line with Core Socialist Values," Dr Koesel mentioned.

"Most prominently, Chinese security services in Xinjiang and Tibet have leveraged cameras, drones, smartphones, and biometric technology to turn those regions into what are effectively open air prisons," said Chris Meserole, Brookings Institution.

"Unfortunately, many of those technologies are readily applied to Buddhist and Christian communities too. In Tibet, merely storing an image of the Dalai Lama on a smartphone can warrant detention," he mentioned.

Regarding the Chinese police-led mass DNA collection programs in Tibet, Dr Emile Dirks, Postdoctoral Fellow at The Citizen Lab at the University of Toronto said, "DNA collection takes place alongside the collection of more extensive information, known as “basic information” (jichu xinxi), which can include everything from banking information, a person’s known social circle, and work and family history. A completed mass DNA database, covering a portion of the TAR’s population and combined with more extensive population data, could become a powerful tool in the arsenal of China’s police to surveil and repress the indigenous people of Tibet."

"Given the history of Chinese state surveillance and repression of the indigenous people of Tibet, and the virtually unchecked power of China’s police, it is likely that this program of mass DNA collection will become one more tool of social control wielded by the Chinese state against ethnic and religious minorities," he said.