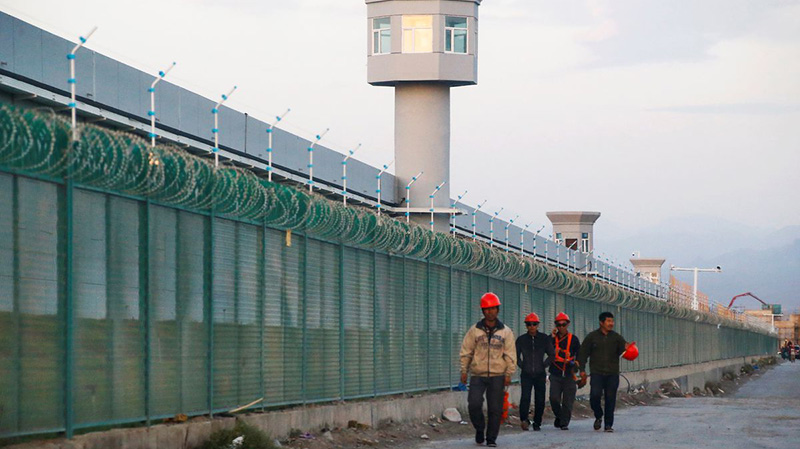 Workers walk by the perimeter fence of what is officially known as a vocational skills education centre in Dabancheng in Xinjiang Uighur Autonomous Region, China September 4, 2018. Photo: file/Thomas Peter

Geneva — The UN Special Rapporteur on Contemporary Forms of Slavery, Tomoya Obokata, identified forced labour arrangements in Tibet similar to those in East Turkestan, noted that “the vocational skills education and training centre system, under which minorities are detained and subjected to work placements,”. He will present his latest report at the 51st session of the Human Rights Council from 12 September to 7 October 2022.

The UN Special Rapporteur on Contemporary Forms of Slavery, Tomoya Obokata identified arrangements of forced labor in Tibet similar to those found in East Turkestan (Ch: Xinjiang) and noted that in Tibet “an extensive labour transfer programme has shifted mainly farmers, herders and other rural workers into low-skilled and low-paid employment”.

The report stated that, there are two distinct State-mandated systems exist in Tibet and East Turkestan: (a) the vocational skills education and training centre system, under which minorities are detained and subjected to work placements; and (b) the poverty alleviation through labour transfer system, where surplus rural labourers are transferred into secondary or tertiary sector work.

Tomoya Obokata, will present his latest report entitled "Contemporary forms of slavery affecting persons belonging to ethnic, religious and linguistic minorities" at the next session of the Human Rights Council, from 12 September to 7 October 2022.

“The report is focused on contemporary forms of slavery affecting persons belonging to ethnic, religious and linguistic minority communities. In that context, the Special Rapporteur identifies the main causes of contemporary forms of slavery affecting these groups and the main manifestations, such as chattel slavery; forced and bonded labour; domestic servitude; sexual slavery; child and forced marriage; and child labour,” the UN expert explained.

“While these programmes may create employment opportunities for minorities and enhance their incomes, as claimed by the Government, the Special Rapporteur considers that indicators of forced labour pointing to the involuntary nature of work rendered by affected communities have been present in many cases. Further, given the nature and extent of powers exercised over affected workers during forced labour, including excessive surveillance, abusive living and working conditions, restriction of movement through internment, threats, physical and/or sexual violence and other inhuman or degrading treatment, some instances may amount to enslavement as a crime against humanity, meriting a further independent analysis,” the report stated.

"Contemporary forms of slavery among minorities, including migrant workers, remain a serious concern. Members of those groups have long suffered from deep rooted discrimination, which has limited their access to quality education and decent work. Consequently, many remain trapped in poverty generation after generation. Minorities are also disproportionately represented in the informal economy, which is characterized by casualization and precariousness, with clear indicators of forced labour in many cases," the report stated.

Senior Researcher in China Studies at Victims of Communism Memorial Foundation, Adrian Zenz noted that “The UN Special Rapporteur’s statement is very significant, coming from an authoritative expert at a major multilateral institution. Very important is that he did not just focus on Xinjiang but also paid attention to the situation in Tibet, which is these days easily overshadowed by Xinjiang.”

Adrian Zenz is amongst the earliest researchers who criticised China for bringing Xinjiang’s system of militarised vocational training to Tibet.

Noting the significance of the report, the Kalon of Department of Information and International Relations, CTA, Norzin Dolma stated, “We welcome the timely report of the Special Rapporteur Tomoya Obokata which validates our concerns and claims of Tibetans being subjected to forced labour in Tibet. Tibetans are being systematically discriminated against in their own homeland (Tibet) and are often relegated to second-class citizens facing egregious human rights violations. In this regard, we would like to reiterate the calls by 50 UN experts to hold a special session on human rights violations being perpetrated by China against Tibetans, Uighurs, Hong-Kongers, Southern Mongolians, and others within the regions in China as well as carry out independent analysis of the extensive human rights violations in Tibet.”

Welcoming the report, Representative Thinlay Chukki from Tibet Bureau Geneva, noted that “this report comes in the backdrop of China’s denial of existence of forced labour system in Tibet and Xinjiang as well as reports of China exerting pressures on the Office of the High Commissioner for Human Rights to not publish its long-due report on East Turkestan (CHN: Xinjiang). The UN Special Rapporteur not only debunks China’s “development, employment and income” rhetoric but also clearly categorises the extensive labour transfer programme of Tibetan farmers, herders and other rural workers as forced labour. We, therefore, join the call of the Special Rapporteur for an independent analysis on the existence of enslavement as a crime against humanity in Tibet.”