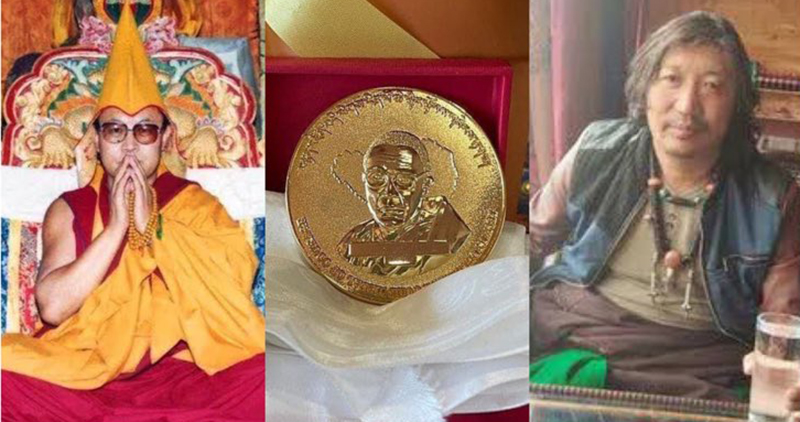 Tenzin Delek Rinpoche's Medal of Courage 2022 was awarded to A-Nya Sengdra, the environmental and anti-corruption activist on July 12, 2022. Photo: TPI

California — Tenzin Delek Rinpoche's Medal of Courage 2022 was awarded to A-Nya Sengdra, the environmental and anti-corruption activist, he was sentenced to seven years in prison on December 6, 2019, by a court in Golog Prefecture, Amdo, eastern Tibet. A-Nya Sengdra campaigned against Chinese government corruption and environmental destruction caused by illegal mining and poaching of endangered animals in Tibet.

The Tenzin Delek Rinpoche Medal of Courage, an annual award is given to Tibetan human rights defenders who show a deep commitment to enhancing the freedom and rights of the Tibetan people at great personal risk. The Award aims to protect such individuals through international recognition. The Award was presented on July 12, 2022, marking the 7th anniversary of the untimely death of Tibetan spiritual leader Tenzin Delek Rinpoche, he died in a Chinese prison on July 12, 2015.

Tenzin Delek Rinpoche Medal of Courage ceremony was held at the Tibetan Association of Northern California Community Center in Richmond, California. It was organised by ‘San Francisco Team Tibet’, which consists of the Tibetan Association of Northern California, San Francisco Regional Tibetan Youth Congress and Bay Area Friends of Tibet. The award is organised and convened by International Tibet Network and nominees are put forward by the Network Political Prisoner Campaign Working Group.

At this year's award ceremony, a special prayer service was held for former political prisoner Jigme Gyatso by monks from Gyuto Monastery. Jigme Gyatso became a hero among Tibetans after a video was released in 2009 in which the prominent monk described his brutal treatment in prison. During his imprisonment, he was subjected to severe beatings that led to his being hospitalised for a long period of time without any sign of improvement. He died on July 2, 2022.

“The 2022 Tenzin Delek Rinpoche Medal of Courage was awarded to A-Nya Sengdra, a Tibetan nomad and climate crisis activist from eastern Tibet. In 2019 China sentenced A-Nya Sengdra to a 7-year prison sentence after he was tried on false charges of “gathering people to disturb public order", when he was simply resisting China's failed Tibet policies and pressing for environmental protection and end to local authority corruption. A-Nya was beaten by Chinese security officers and held for over 14 months without trial. His arrest and detention are a direct response to his peaceful activism as an environmentalist, community leader, and anti-corruption activist,” said a statement of organisers.

Bay Area Friends of Tibet representative and organiser of the Award Ceremony, Giovanni Vassalo: "I hope to join previous award winner, Dhondup Wangchen, when he hands this award one day directly to A-Nya-Sengdra, 2022 Tenzin Delek Rinpoche Medal of Courage awardee, noted environmentalist and a political prisoner. We hope the ceremony will help to highlight A-Nya Sengdra's case and lead to his liberation. We continue to pray for the authentic happiness of Tibetans and their aspirations and the health and well-being of Tibetan lands."

Niece of Tenzin Delek Rinpoche, Nyima Lhamo said: “I am honored to see A-Nya Sengdra receive the Tenzin Delek Rinpoche Medal of Courage for his work as an environmental activist. My late uncle would have been very proud of his work as he worked hard to protect the environment and end China's failed policies. Thank you all so much for the continued support and remembrance of my uncle Tenzin Delek Rinpoche and his work and sacrifice. We are very proud of this award in my uncle's name and that his sacrifice can be used to support other great Tibetan human rights defenders. Thank you International Tibet Network for continuing to shine a light on brave Tibetans who continue to resist China's occupation of Tibet. Together we highlight their important actions.”

Other nominees for the award were, Rinchen Kyi, Tenzin Nyima and Bangri Rinpoche. Rinchen Kyi is a school teacher from Golog Prefecture in eastern Tibet, and she was arbitrarily detained at her home on August 1, 2021, and later charged with “inciting separatism” despite not having committed any crime. She was released in April 2022.

Tenzin Nyima , a 19-year-old Tibetan monk, was arrested in 2019 and later died from injuries inflicted on him by Chinese authorities. Bangri Rinpoche, sentenced to 19 years in prison. He was arrested in 1999 after receiving charitable funding from overseas.

July 12, 2022, marks the seventh anniversary of the mysterious death of Venerable Tenzin Delek Rinpoche in a Chinese prison. Rinpoche died on July 12, 2015, while serving a life sentence in Chuandong prison in Chengdu, Sichuan province, southwest China. The Chinese prison authorities informed Rinpoche's sisters of his death the same day. However, despite repeated attempts, they refused to give details of the circumstances that led to his death.