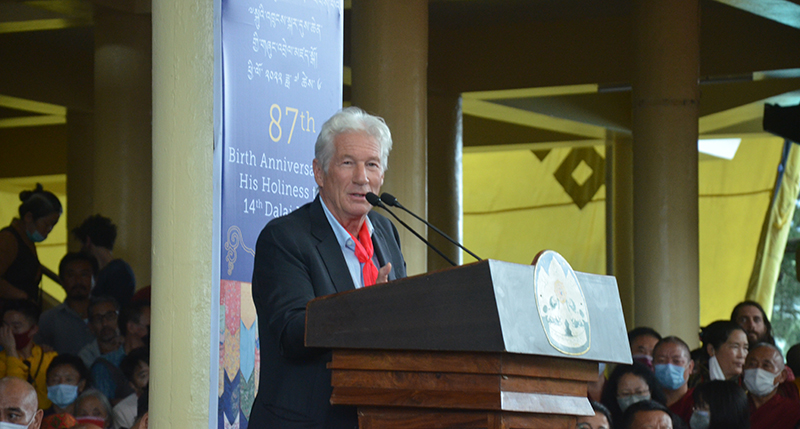 Richard Gere, long-time friend of His Holiness and Tibet, speaking on the occasion of His Holiness the Dalai Lama's 87th birthday, July 6, 2022. Photo: TPI/Yangchen Dolma

Dharamshala —“ When His Holiness the Dalai Lama received the Nobel Peace Prize in Oslo, we were all there, full of joy and singing a song that no one has written, a song of joy, compassion, freedom and possibility, our visions are not of violence and ignorance but of wisdom, compassion, love and kindness, His Holiness is the international melody of possibility that we all sing,” said Richard Gere, the staunch supporter of Tibet.

The Central Tibetan Administration, Tibetans and friends of Tibet celebrated the auspicious occasion of the 87th birth anniversary of His Holiness the Great 14th Dalai Lama in Tsuglagkhang, Dharamshala, H.P, India, on July 6, 2022. This anniversary was also celebrated with great joy and gratitude all over the world by Tibetans and followers of Buddhism on July 6.

The function was honoured by the presence of American actor Richard Gere. He is the chairman of the International Campaign for Tibet and a dear friend of His Holiness and the Tibetans.

“Tashi Delek! All my brothers and sisters here, what a pleasure to see you all. All of you Tibetans should be very proud. I mean, it is not once in a lifetime, once in a millennium, maybe once in two millennia, that such a person, such a human being as the Dalai Lama is born as a Tibetan. There are so many wonderful things to say about His Holiness. But first I want to speak to the Tibetans: His Holiness will not be here forever, he will leave his body at some point, and I hope it will be in 113 years, maybe in 150 years. But we cannot rely on the Dalai Lama to carry us all,” Actor Richard Gere said.

“We have to carry each other, and this reality will soon hit us. It is up to the Tibetan people to carry the weight of your own freedom, truth, possibilities and visions. The Dalai Lama cannot do it for all of us. So in this context where we know we all have to step forward,” he added. “By the way, it is almost exactly 40 years since I first came to Dharamshala. Forty years ago, it was a quiet and beautiful place. And of course it has changed a lot today, it has become a place of international pilgrimage. Mainly because of His Holiness, but also because of the Tibetan culture. I have been there for a long time and there is no refugee community that has been as successful as the Tibetan refugee community,” the American actor continues.

“There are a few special moments that I remember, and one of the most special is when His Holiness received the Nobel Peace Prize in Oslo. And I was lucky enough to be there with many Tibetans, there were international supporters of His Holiness. His Holiness gave a wonderful speech, he was the first Nobel laureate to talk about the environment, and it was a big deal at the time,” he said.

“His Holiness spoke very seriously about our responsibility to the Earth. His Holiness gave his speech and many of us were crying and clapping. We walked out of the hall where the speech was given, we were in the streets of Oslo and it was getting dark. It gets dark very early in December. They were handing out candles, and we all had our candles and we started lighting them as it got darker and darker. People from all over the world were there and people started to move through the streets of Oslo with this feeling of joy and happiness that the Dalai Lama had received the Nobel Peace Prize,” Richard explained.

“And quite spontaneously, everybody started singing, they started singing a song, a song that nobody had written, it just came from a very deep heart of all of us. And it was all the languages of the world that started to unite, a song, a melody of love and compassion and possibility. As we walked through the streets, we were very close to each other, we were touching each other and people started holding hands. When we walked through the streets to the square in front of the hotel where His Holiness was staying,” he continues.

“And this singing became very wide, very deep, and there was a balcony outside of His Holiness' window, outside of the room that he was staying in, we were looking up and His Holiness appeared on the balcony and looked at us and he had the biggest smile on his face as he saw this crowd of international people speaking a new language. With love and compassion he called us and told us to wait for him, he came down to the street and made his way through the crowd touching everyone as we sang this song of freedom, joy and possibility. That we all felt it was possible. That place where we all get along, where we care for each other and are responsible for each other and the planet. And responsible for our visions, not of violence and ignorance, but of wisdom, compassion, love and kindness. And it was palpable. You could feel it. It was so rich," he added.