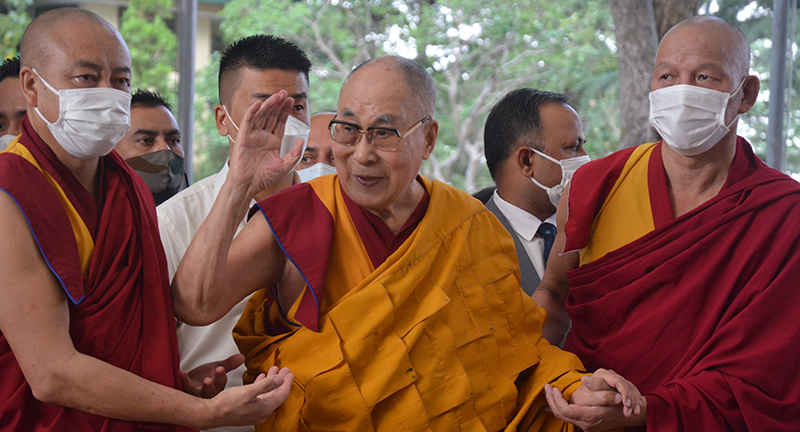 Dharamshala — The Central Tibetan Administration celebrated the birthday of His Holiness the Dalai Lama in Dharamshala. Shri Jai Ram Thakur, the Chief Minister of Himachal Pradesh, was the chief guest. Social media was flooded with birthday greetings. Members of Parliament of different countries and international leaders took to Twitter to praise his remarkable efforts for the Tibetan people and world peace.

Narendra Modi, Prime Minister of India, called His Holiness to extend his wishes. “Conveyed 87th birthday greetings to His Holiness the @DalaiLama over phone earlier today. We pray for his long life and good health,” he wrote on his official Twitter handle.

“My best wishes to His Holiness the @DalaiLama on his 87th Birthday. I pray that he continues to spread love and compassion for many more years to come,” Chief Minister of Delhi, Shri Arvind Kejriwal expressed on his Twitter.

“Warm birthday greetings to His Holiness Dalai Lama. May the eternal lamp of love, harmony, and peace in you keep enlightening the world,” tweeted Shivraj Singh Chouhan, Chief Minister of Madhya Pradesh.

“Warm wishes to His Holiness @DalaiLama on birthday. May you be blessed with good health and long life, spreading love, compassion and peace across the world,” Naveen Patnaik, Chief Minister of Odisha, wrote on Twitter.

Union Minister Nitin Gadkari also took to Twitter to wish His Holiness, “Birthday greetings to the Spiritual leader 14th Dalai Lama. May you be blessed with good health and long life.”

"My deepest reverence, prayers and heartiest wishes for a long and healthy life of His Holiness The 14th Dalai Lama on the auspicious occasion of his 87th birthday. His values and teachings are the guiding light towards love, peace and compassion for the humanity," wrote Kiren Rijiju, the Minister of Law and Justice, India.

"Warm greetings on the occasion of the 87th Birthday of His Holiness the 14th Dalai Lama today. Wishing a very happy birthday to the messenger of peace, harmony and compassion. My prayer for your good health and long life H.H. the 14th Dalai Lama Gyalwa Tenzin Gyatso," wrote Jamyang Tsering Namgyal, Member of Parliament (Lok Sabha).

Birthday wishes from world leaders have also poured in for His Holiness the Dalai Lama's 87th birthday on July 6, 2022:

"It is with great admiration that, I join millions in sending warm birthday wishes to His Holiness The Dalai Lama — a beacon of hope for the Tibetan people and a force for compassion in the face of oppression. Today, and every day, the Congress remains unwavering in our bipartisan, bicameral gratitude for His Holiness’ inspiring leadership, and we continue to stand with him in the struggle for true religious, linguistic, and cultural freedom in Tibet," expressed Nancy Pelosi, Speaker of the United States House of Representatives.

Secretary of State Anthony Blinken of the United States referred to the Dalai Lama as "an inspiration for millions throughout the world," saying that his messages of equality, inclusion, and compassion appeal to people worldwide. “I extend best wishes to His Holiness the Dalai Lama on the occasion of his 87th birthday today. His Holiness brings light to his fellow Tibetans and so many around the world by promoting peace, encouraging inter-faith harmony, and advocating for the preservation of the Tibetan language and culture. I admire His Holiness’s ongoing commitment to non-violence to resolve the grievances of the Tibetan community. I am also grateful for his dedication and service to humanity. The United States will continue to support His Holiness’s and the Tibetan community’s efforts to preserve Tibet’s distinct linguistic, religious, and cultural traditions, including the ability to freely choose their religious leaders,” wrote Blinken in a statement issued by him extending his wishes.

“On @DalaiLama’s birthday, I honor his lifetime of compassionate advocacy and look forward to continuing to work with His Holiness to advance direct dialogue with the PRC, promote respect for Tibetans’ human rights, and meet the needs of Tibetan refugees, among other priorities,” tweeted Under Secretary Uzra Zeya.

"The International Buddhist Confederation wishes His Holiness The 14th Dalai Lama, Tenzin Gyatso, a blessed and healthy birthday. May His birthday bring happiness, joy and a year filled with peace and prosperity for all sentient beings. As the Bodhisattva of Compassion , the reformer, the Nobel Peace Prize laureate and the conqueror of harmony, may he continue to inspire us, especially in the current situation of turmoil and disharmony across the world," the International Buddhist Confederation stated.

Carlo Luyckx, President of the Belgian Union (Union Bouddhiste Belge), offered prayers and well wishes on the occasion. The greeting message read, “As President of the Belgian Buddhist Union and Representative of the European Buddhist Union to the EU, on behalf of the 150.000 Belgian Buddhists and the 4 million European Buddhists, I would like to express the most sincere congratulations to His Holiness the Dalai Lama for his 87th birthday and make wishes and prayers that his life may last many more years, for the benefit of the Tibetan people wherever they are and for His Holiness to continue his endeavors for a lasting peace between all inhabitants of this Earth. I also wish to formulate my official request and that of all Buddhists in Belgium and Europe, that all public authorities, including the government of the People’s Republic of China, refrain from interfering in the process of recognition of the reincarnated Lamas, and more particularly in the recognition of the future incarnations of His Holiness the Dalai Lama, which, as tradition dictates, can only be carried out by the recognized spiritual authorities of Buddhism.”

"The Chairs wish the @DalaiLama a happy 87th birthday. His message of compassion, non-violence and protecting the environment is inspiring and so very needed in our world today. We stand with all #Tibetans seeking to protect their culture and identity and to defend religious freedom," wrote Congressional-Executive Commission on China.

Senator Rice and Senator Jordon Steele-John, Australian Greens spokesperson for foreign affairs extended their wishes to His Holiness on the occasion of his 87th birthday.

“We wish your Holiness the very best on your 87th Birthday. We are thankful for the compassion and peace you bring to our lives and all the creatures in the world, and your leadership in support of peace and non violence,” they wrote.

“We hope your day is filled with happiness and love and wish you many more to come,” they concluded.