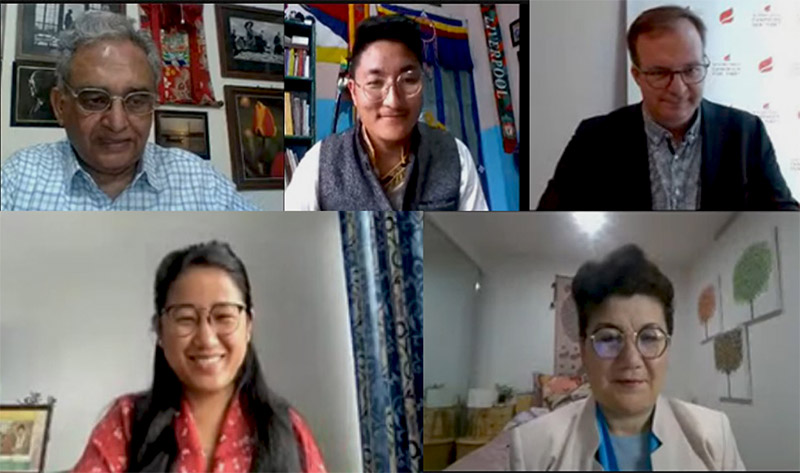 The webinar, entitled "Challenges Before the Dalai Lama", organised by the Center for Himalayan Asia Studies and Engagement (CHASE) and the Tibetan Youth Congress (TYC), to commemorate His Holiness's 87th birthday, provided an in-depth discussion about the challenges before His Holiness the Dalai Lama in the current times.

The webinar was moderated by Vijay Kranti, President of CHASE, and featured three renowned speakers with diverse backgrounds.

Moderator Vijay Kranti first invited Kai Müller, Executive Director of the International Campaign for Tibet (ICT), Germany, to make a presentation on the threat to Tibetan identity. He spoke about the Chinese Communist Party's (CCP) onslaught on Tibetan culture, which is systematic, gradual and has serious consequences for Tibetan culture. He went on to point out that this onslaught focuses on three areas: education and language, religion and ways of living, and detailed how it poses a threat to Tibetan identity.

He noted that Tibetans have no way of challenging the regressive policies imposed on them by the Chinese state. Müller lauded the resilience of Tibetans who fight for the protection of their language, culture, religion and environment. “In closing I would like to urge the international community to understand the CCP policies in Tibet as what they are- a systematic and intentional attempt to eradicate the [Tibetan] culture,” he said concluding his speech.

The moderator then asked Nurgul Sawat, Executive Chairman of the Uyghur Freedom Forum, to present her views on the problems faced by Uyghurs and how they view His Holiness the Dalai Lama. She started her talk by accentuating the similarity in pattern of persecution style in Tibet and East Turkestan. She spoke in detail about what happened in Tibet repeating itself in East Turkestan by substantiating it with evidence.

She highlighted how the same pattern of pushing children into state-run boarding schools, relocating the local population, locking up people in camps, attacking religious freedom and places of worship is being followed by the CCP. “We are almost like a comrades. We are up against the same evil regime, we up against exactly the same pattern of systemic genocide, there’s nothing less,” she commented.

“Both Tibetan and Uyghur community we actually slowly merge and we have learned how to work together. We understand, get to know each other and understand each other slightly in depth. When we run certain campaigns, do certain things, we can actually quite happily come in, integrate quite organically, we can do things together,” she added.

She highlighted the lessons the Uyghur community has learned from the Tibetan government in exile and the importance of an administrative system that can hold the community together. She paid tribute to the hard work and campaigning of His Holiness to accomplish this enormous task. Nurgul Sawat concluded by paying her respects to His Holiness the Dalai Lama and talking about how international community turns a deaf ear and blind eye to the atrocities of the Chinese state.

Moderator Vijay then invited Lhagyari Namgyal Dolkar, a member of the TPiE, to present the Tibetan perspective and how Tibetans view His Holiness. She discussed in detail the first three main commitments of His Holiness. She then spoke about his achievements, including his commitment to building a democratically conscious society among Tibetans and pursuing a movement for Tibetan freedom. She also praised his work in rebuilding Tibetan Buddhism.

Namgyal Dolkar explains how His Holiness has inspired many common people to follow the message of peace, non-violence, religious harmony, and compassion. “With the gift of democracy by His Holiness, even the Tibetans inside Tibet without a strong leadership under the occupied territory has been able to challenge the dictatorial imperialist Chinese government for the past more than 60 years under different generations. It Is the teachings of His Holiness in their heart, the pride as Tibetans and their courage to resist for justice, that has retained their grit and I believe that this will remain the case during post Dalai Lama as well,” she said.

The session concluded with the vote of thanks delivered by Sonam Tsering, General Secretary of TYC, and he said that the present Dalai Lama’s towering personality has won praise of not only the Tibetan people but of the entire world community also. His message of peace, non-violence and Universal Responsibility has become a guiding light for the world community today. He assured the audience that the present Dalai Lama himself and the Tibetan community whom he has empowered enormously over recent decades, are capable of handling the Chinese onslaught on Tibet successfully.