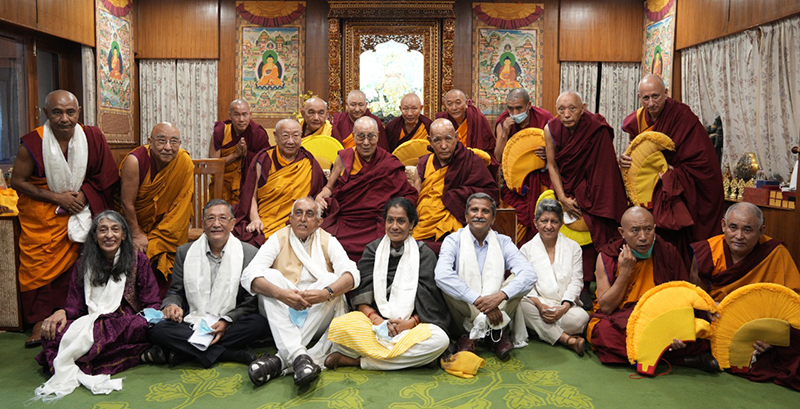 His Holiness the Dalai Lama met with Gaden Tri Rinpoche, Jangtse Choeje Rinpoche, the abbots of the member monasteries of Geluk International Foundation and their academic advisors,July 4, 2022. Photo:OHHD

Dharamshala — Gaden Tri Rinpoche, Jangtse Choeje Rinpoche, the abbots of the member monasteries of Geluk International Foundation, and their academic advisors, Prof Virander Chauhan, Ashok Thakur, and Prof Prakash Chandra, met His Holiness the Dalai Lama, to discuss the establishment of a "Buddhist Institute" to preserve the unique form of study introduced at Nalanda Monastic University in Bihar, India in the 5th century.

The Abbots of Geluk International Foundation member monasteries, and their Academic Advisors, Professor Virander Chauhan, Ashok Thakur, and Professor Prakash Chandra, held a press conference on the Buddhist Institute in the hall of Norbu House, the following audience with His Holiness the Dalai Lama on July 4, 2022.

“In accordance with the vision of His Holiness the Dalai Lama, the Geluk International Foundation announces the establishment of The Buddhist Institute, an umbrella organisation providing certification to members of the Foundation's constituent monasteries and nunneries, while also making its unique form of ancient Indian wisdom and education available to the outside world including men, women, ordained and laypeople,” said Geshe Lobsang Gyaltsen, former Abbot of Gomang Monastery while reading out their statement.

According to the press release, the institute aims to preserve the unique form of study introduced in the ancient monastic university of Nalanda in Bihar in the fifth century. “The purpose of the Institute is to preserve the unique form of study introduced at Nalanda Monastic University in Bihar, India in the 5th century, and further developed in Tibetan monasteries down the centuries. This course of study preserving ancient Indian wisdom includes a profound investigation of reality along with a deep understanding of the workings of the mind and emotions, with the aim of equipping an individual with the ability to lead a better life and bring about a more harmonious world,” the statement mentioned.

The institute plans to teach modern subjects not previously available in traditional monastic institutions, such as comparative religion, science, western philosophy, history, and mathematics. The institute also aims to become a university under the UGC Act of 1956.

“The Buddhist Institute will make this knowledge available to the world while also developing its own courses of study on a variety of subjects not previously available within traditional monastic institutions, such as comparative religion, science, western philosophy, history, and mathematics, in order to broaden the opportunities offered by the Institute to monastic and lay students from all backgrounds. The Institute aims to evolve into a university as defined under the University Grants Commission Act 1956,” Geshe Lobsang said.

Mr Ashok Thakur talked about monasteries in India and their importance in Buddhist culture and tradition. He recalled a discussion with His Holiness in which he raised the alarm about the lack of young people involved in these institutions, pointing out that this could mean the disappearance of the Buddhist and Tibetan heritage.

Therefore, they presented the idea of opening up a world-class institute for Buddhist teachings, where faculty from the existing monasteries and the modern world will come to teach students from across the world, not only monks or Buddhists. This was the Institute that could ensure the survival and progression of the Buddhist tradition.