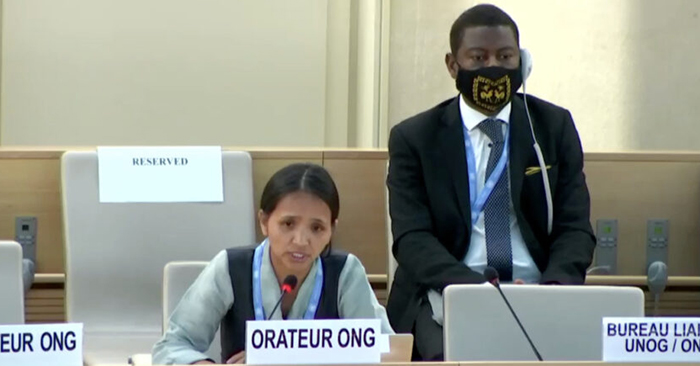 Geneva — The Chinese government's policies to reform Tibet's education system by violating the fundamental rights of Tibetans to receive education in their mother tongue was raised at the 50th session of the United Nations Human Rights Council (UNHRC) on June 24, 2022.

Kalden Tsomo, the UN advocacy Officer of the Tibet Bureau, Kalden Tsomo, delivered an oral statement on China’s ever growing attack on Tibetan culture and language through denial of education in Tibetan language and cultural settings.

She spoke about the Chinese government's regressive educational policies, which aim to suppress Tibetan identity and culture by removing all elements associated with Tibetan culture and language from the curriculum and setting. In return, students are immersed in Chinese culture and language.

Kalden Tsomo explained how Xi Jinping's campaign to establish a Han Chinese-centred education system has had a serious impact on Tibetan children and youth, who have become the main targets of China's repressive policies and actions. The Chinese government's compulsory colonial boarding school system is one of the important issues she highlighted, imploring the Human Rights Council (HRC) and the Special Rapporteur to call on China to immediately stop removing Tibetan children from their families and their own cultural framework.

Determined to ensure that the Human Rights Council reached a resolution on this issue, she asked what steps the Council would take to hold the Chinese government accountable for its atrocities. In addition, she asked the Special Rapporteur to outline the role he intends to play with the Chinese government to ensure that the right of Tibetan children to receive education in their mother tongue is respected and that they are afforded the same rights and respect as their Chinese counterparts.

she also expressed concern about the alarming situation in Tibet due to the arrest and detention by the Chinese government of a large number of Tibetan singers, intellectuals, writers and students actively involved in the preservation of Tibetan cultural and linguistic identity. The 50th session of the UNHRC started on June 13, 2022 at the Palais des Nations in Geneva, Switzerland, and will end on July 8, 2022.