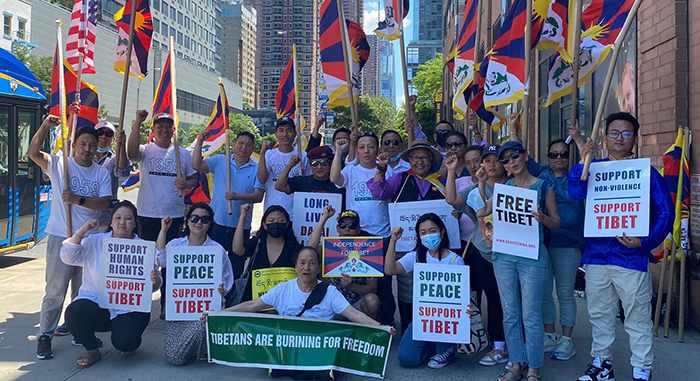 Tibetans staged a demonstration outside the Chinese consulate in New York on June 25, 2022. Photo: file

The Regional Tibetan Youth Congress of New York and New Jersey (RTYC NYNJ), organised a demonstration in front of the Chinese Consulate on June 25, 2022, to draw attention to the current situation in Tibet and to protest the inhumane treatment of Tibetans by the Chinese government.

“We are protesting against the Chinese government's increased repression in Tibet. Recently, a Tibetan monk self-immolated in Khagya Township, Kanlho, Amdo Province, northeast Tibet, to protest against the Chinese authorities' crackdown on Tibetan monastic institutions in Kanlho,” one member of RTYC NYNJ said.

“Gendun Lhundup, a Tibetan writer and poet from Rebgong County, Amdo Province, north-eastern Tibet, was sentenced to four years imprisonment by a Chinese Intermediate People's Court on December 1, 2021, on a charge of so-called "inciting separatism", he added.

“The father of the late Tsewang Norbu, a famous Tibetan singer who immolated himself in front of the Potala Palace on February 25, 2022, was also forced to end his life by force and pressure from the Chinese authorities,” said RTYC NYNJ while explaining why they are protesting in front of the Chinese consulate on 25 June 2022.