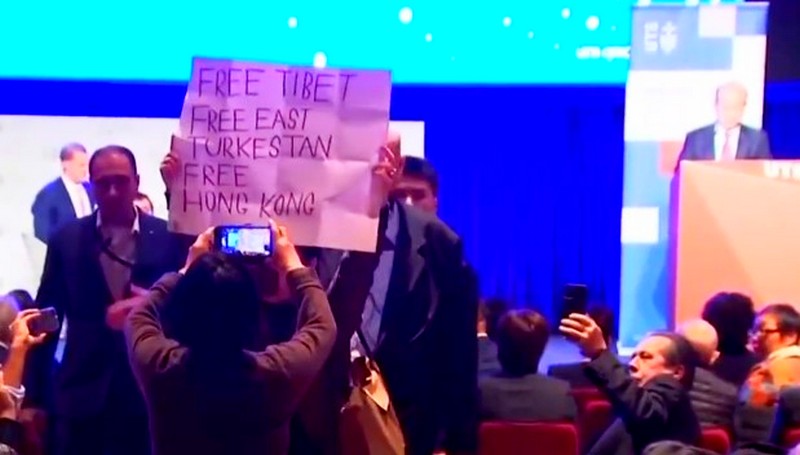 A protester holding a banner reading "Free Tibet" raised in front of a Chinese diplomat during his speech at the UTS, 24 June 2022. Photo: File

Australians were shocked when the Chinese ambassador spoke of "expression of free speech" in Sydney on Friday, 24 June 2022, when China continues to be one of the worst in the world at persecuting journalists and bloggers, restricting and censoring news.

The hypocrisy and presumptuousness of the Chinese ambassador Xiao Qian were ludicrous and ridiculous, as the authoritarian regime in Beijing continues its decades-long crackdown on writers, journalists, bloggers and cyber-dissidents, and savagely and brutally treats them in prisons across China, Tibet and East Turkestan.

For example, in occupied Tibet, China recently sentenced two Tibetan writers, Lodoe to four and six months and Lhundup to four years in prison for simply expressing their views on their motherland Tibet and their religious and cultural identity.

Therefore, Xiao Qian, another wolf in sheep's clothing, long accustomed to censorship and restrictions on press freedom, is either completely ignorant or has very little idea of the real definition of freedom of speech in democratic countries like Australia.

"Those who are attending the event should respect law and order and keep quiet while we are speaking,"the Chinese diplomat arrogantly said at the University of Technology Sydney, without specifying whether he was talking about the Chinese law and order that must be respected in Australia.

The new Chinese ambassador to Canberra, like other Chinese diplomats known as so-called "wolf warriors", expects Australians to respect the Chinese law and order in Australia, where freedom of speech enjoys high regard as a cornerstone of democracy.

"Those number of people [protesters) who come again and again, disrupting the process, is not an expression of freedom of speech," Qian said in response to peaceful protests that made him embarrassed and showed a different image of China from the one he presented.

According to Reporters Without Borders (RSF), China ranks 175th out of 180 countries in the 2022 RSF Press Freedom Index, the largest prison of news and information providers in the world.