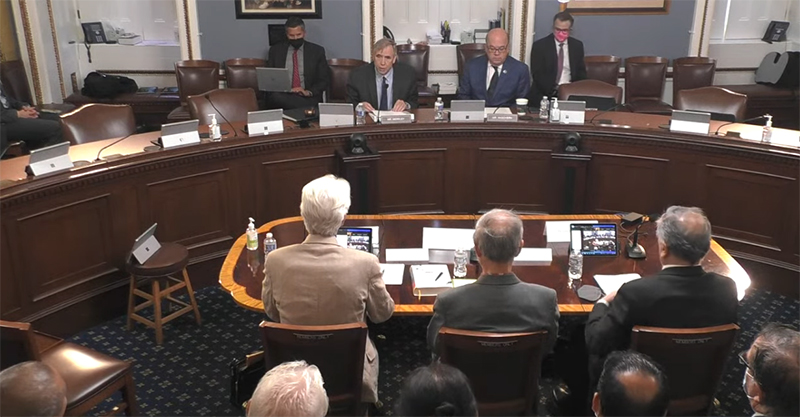 Washington DC — “China’s pre-1949 official historical records clearly show that, before the PRC invaded Tibet in 1950, Tibet was never part of China. Sadly, today many governments incorrectly believe this ridiculous lie, and this is part of the reason why many western democracies fail to provide adequate support for upholding Tibet’s sovereignty,” said Hon-Shiang Lau, in his testimony at Congressional-Executive Commission on China hearing entitled “Tibet: Barriers to Settling an Unresolved Conflict.”

In his opening speech, Senator Merkley said that the Chinese authorities regularly violate Tibetans' freedoms of religion, expression, and assembly and deny them the right to self-determination. He further added, “the Chinese Communist Party has waged a year’s long campaign of Sinicization, requiring conformity with officially sanctioned interpretations of religion and culture, not the authentic practice of teaching in Tibetan Buddhism.”

“Also punished are those who express dissatisfaction with Chinese rule in Tibet. These punishments range from warnings to surveillance to interrogation and detention. The Commission’s Political Prisoner Database currently includes records of 715 Tibetans detained or imprisoned for political or religious reasons. We note that there are considerably more cases of detention in China than we can capture in the database,” the Senator added.

Representative James McGovern, said," Chinese officials say they will return to the table only if the Dalai Lama meets certain demands – demands that are not only unreasonable, but false. The U.S. government, to its credit, has consistently called on the Chinese to return to dialogue, without preconditions. But that hasn’t worked. For 12 years, the Tibetans stood ready, the Americans asked, but the Chinese turned away."

"Our witnesses today bring expertise and a variety of perspectives – legal, historical, policy, and personal – on the Tibet-China dialogue." Rep McGovern stated.

He further added, “They are forced to live in an authoritarian system under a paranoid central government that sees any expression of distinct identity as a threat to their power.”

Michael van Walt van Praag, Professor of International Law and Executive Chairman of Kreddha, stated clearly that Tibet was not historically part of China and denied their claim to Tibet from ancient times. The professor also accused the international community, including the US, of falling in line with China's historical narrative that Tibet has always been part of China.

The Professor said, “Contrary to what the People’s Republic of China claims and to what many people take for granted, Tibet was historically not a part of China. This is one of the outcomes of a multiyear collaborative historical research project that I recently completed and published.”

“This is relevant and requires our attention because the PRC government has made an agreement on its version of history a precondition to Sino-Tibetan negotiations, which have been in deadlock now for 12 years. More fundamentally, the PRC bases its entitlement to Tibet solely on its assertion that Tibet has been an integral part of China since antiquity. Whether or not Tibet was historically a part of China, therefore, determines whether the PRC has the legitimacy to rule Tibet or not. And that, in turn, informs the international community’s obligations and responsibilities regarding the Sino-Tibetan conflict,” he added.

Professor Praag furthered that the international community was wrong in believing that the Sino-Tibetan conflict is an internal affair, as China illegally invaded Tibet in 1950, according to International Law.

“China’s pre-1949 official historical records clearly show that, before the PRC invaded Tibet in 1950, Tibet was never part of China. This is an important issue because China is a signatory to the relevant covenants of the League of Nations and the United Nations; which means that, since 1919, China has promised not to gain territories through military conquest thereafter. Moreover, the PRC incessantly condemns other countries for their past colonial conquests and their past “bullying” of China. Therefore, the PRC needs to cover up its 1950 Tibet conquest as a “unification” of a territory that has been “part of China since antiquity.” Sadly, today many governments incorrectly believe this ridiculous lie, and this is part of the reason why many western democracies fail to provide adequate support for upholding Tibet’s sovereignty,” said Hon-Shiang Lau, Retired Chair Professor, City University of Hong Kong.

He also presented maps from the Ming and Qing dynasties to prove that Tibet was never part of a Chinese empire and that, therefore, the PRC's claims to unify China by annexing Tibet are baseless.

Ellen Bork, Contributing Editor, American Purpose, highlighted the use of propaganda by the Chinese government and their use of state-owned media to popularize a false narrative about Tibet and its intentions.

Ellen Bork added, “more than 70 years after the invasion, Tibet remains a high priority, for the Chinese Communist Party. This priority is evident in the attention and resources the Party devotes to surveillance, repression, and control, to General Secretary Xi Jinping’s goal of Sinicizing religion, the exploitation of natural resources, and to building up military forces along Tibet’s border with India.”

The International Campaign for Tibet said, “The Chinese Communist Party’s rule in Tibet has no legitimate historical, diplomatic, or popular basis, and so the CCP expend significant resources to manufacture legitimacy for Chinese rule in the Land of Snows. The international community has a responsibility to disarm these tactics and place greater prominence and force behind calls for negotiation.”