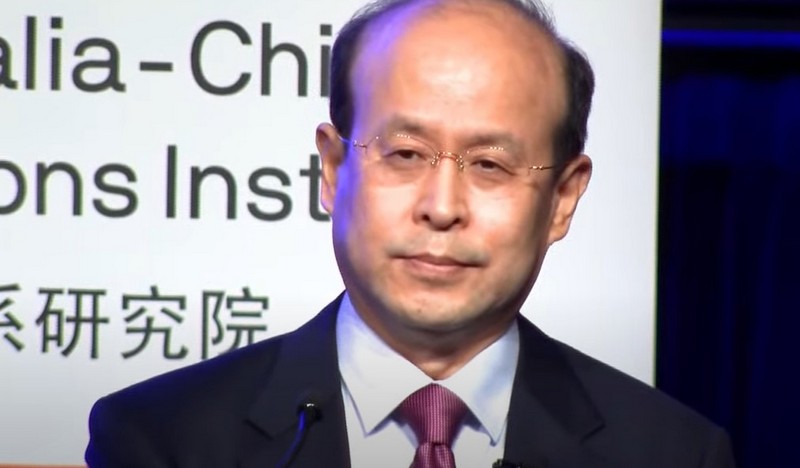 Chinese Ambassador Xiao Qian was in the dark about free speech expression while giving a speech at UTS, 24 June 2022. Photo: File

Several peaceful protests disrupted a speech by the Chinese ambassador at the University of Technology Sydney on Friday, over genocide and human rights abuses in Tibet and East Turkestan, and the suppression of democracy in Hong Kong.

A protester held signs reading "Free Tibet", calling for an end to the illegal occupation of Tibet and expressing concern about human rights violations in Tibet by China. He also shouted slogans calling for "stop genocide" in East Turkestan and expressed their concern about human rights violations in East Turkestan and the horrendous treatment of Uighurs in their home country.

The peaceful protests, held at the University of Technology in Sydney, demanded an end to the suppression of democracy and press freedom in Hong Kong, where the administration has been turned recently into a puppet of Beijing.

As security escorted the protesters out of the hall, several angry Chinese Communist Party sympathisers shouted "go away" and some even angrily stood up, grabbed and tore the "Free Tibet" banner from the protester, who was tightly surrounded by security personnel.

Xiao Qian, China's ambassador to Australia, who has long been accustomed to censorship and control of press freedom with little knowledge of western freedom of speech, gave a controversial speech at the University of Technology Sydney, saying that the peaceful protests during an event were not an “expression of freedom of speech".

"Wolves in sheep's clothing, China's authoritarian leadership, led by the dictator Xi Jinping, Qian is a Chinese diplomat whose country has been long accustomed to the rigorous of censorship and the tightened control of the freedoms of ordinary citizens," said TPI editor Yangchen.

"Because, for dictatorships or authoritarian governments and totalitarian leaderships, freedom of speech or freedom of the press are the ultimate enemies of their grip on the authorities and the obstacles to their maintaining control and remaining in power," she added.

A netizen said: 'Freedom of speech and freedom to protest exist unless you live in China, Russia or North Korea. Australia is not China or North Korea, and people are not asked for permission to feel and say anything.