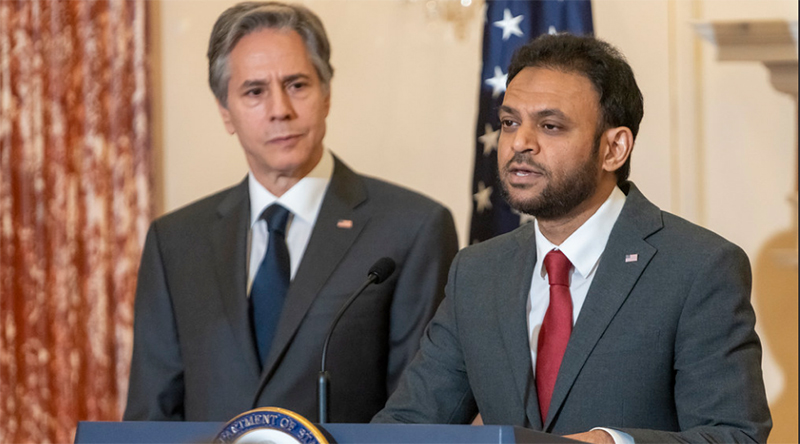 Washington D.C — “China continues to be one of the worst abusers of religious freedom in the world. They have engaged in genocide and crimes against humanity against the Uyghurs. They also continue their repression, as I spoke about, of Tibetan Buddhists, but also Protestants, Catholics, the Falun Gong, Hui Muslims,” said Rashad Hussain, US Ambassador at Large for International Religious Freedom, on the occasion of the release of the 2021 International Religious Freedom Report on June 2, 2022.

Secretary of State Antony Blinken and US Ambassador Hussain released the 2021 International Religious Freedom Report at the US Department of State in Washington, D.C., on June 2, 2022. The report covers the period from 1 January to 31 December 2021. This report of over 2,000 pages presents the state of religious freedom in nearly 200 countries and territories around the world.

“China continues its genocide and repression of predominately Muslim Uyghurs and other religious minority groups. Since April 2017, more than 1 million Uyghurs, ethnic Kazakhs, Kyrgyz, and others have been detained in internment camps in Xinjiang. The PRC continues to harass adherents of other religions that it deems out of line with Chinese Community Party doctrine, including by destroying Buddhist, Christian, Islamic, and Taoist houses of worship and by erecting barriers to employment and housing for Christians, Muslims, Tibetan Buddhists, and Falun Gong practitioners,” Secretary Blinken said.

“The report gives voice to countless individuals around the world who have been killed, beaten, threatened, harassed, or jailed for seeking to exercise their beliefs in accordance with the dictates of their conscience. The United States will continue to stand for those who are oppressed all over the world,” Ambassador Hussain said.

Ambassador Hussain explained the three key themes of the report and said,” First, too many governments use discriminatory laws and policies and abuse their own people. We have seen two genocides of religious minority communities in recent years – in China and in Burma. Second, rising societal intolerance and hatred are fueling violence and conflict around the world. Governments must not sit silent or stand idly by in the face of such oppression. Third, powerful collaboration among civil society, governments, and multilateral partners has led to some progress and provides hope in addressing these complex challenges.”

“The PRC Government also continued its crackdown on Tibetan Buddhists. Authorities arrested, tortured, and committed other abuses against Tibetans who promoted their language and culture, possessed pictures and writings of the Dalai Lama, or practiced their religion at Buddhist monasteries. atrocities and other abuses,” he said.

“We remain concerned about members of religious minority groups in countries around the world, including in Afghanistan, Burma, the People’s Republic of China, India, Nigeria, Pakistan, and Vietnam. The concerning trend lines in these countries underscore that much work remains to be done,” the Ambassador said.

“CCP regulations control all aspects of Tibetan Buddhism, including religious venues, groups, personnel, and schools, and which authorities said included Tibetans living outside the country, particularly the Dalai Lama,” the report stated.

“In the Tibet Autonomous Region (TAR) and other Tibetan areas, there were reports of forced disappearances, arrests, torture, physical abuse, and prolonged detentions without trial of monks, nuns, and other individuals due to their religious practices,” it continues.

“Authorities arrested writers and artists for promoting Tibetan language and culture. Authorities continued to arrest individuals for possessing photographs of, or writings by, the Dalai Lama,” it added.

“Travel and other restrictions hindered monastics and laypersons from engaging in traditional religious practices and pilgrimages. Repression, including arbitrary surveillance, increased around politically sensitive events, religious anniversaries, and the Dalai Lama's birthday,” the report said.

“U.S. officials underscored that decisions on the succession of the Dalai Lama should be made solely by the Tibetan people, free from interference, and they raised concerns about the continued disappearance of Panchen Lama Gedhun Choekyi Nyima, missing since 1995,” it stated.

“During the year, the U.S. government used a variety of diplomatic tools to promote religious freedom and accountability in Tibet, including continuing visa restrictions on PR government and CP officials that it had determined to be "substantially involved in the formulation or execution of policies related to access for foreigners to Tibetan areas, " pursuant to the Reciprocal Access to Tibet Act of 2018,” it said.