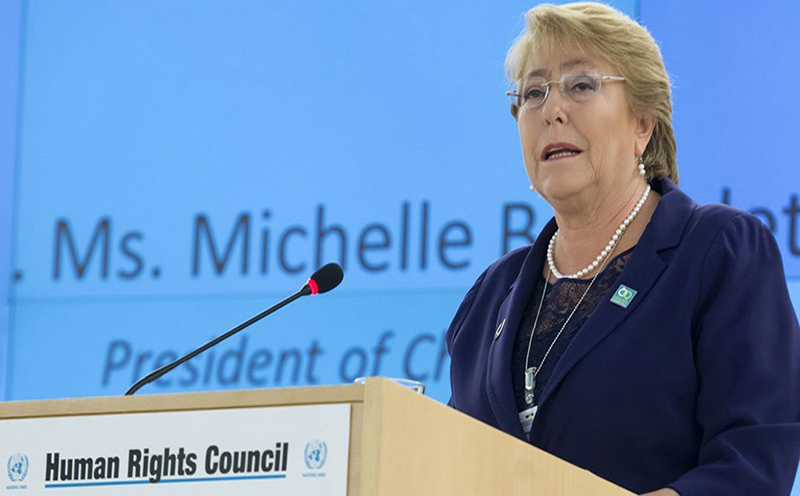 Dharamshala - Central Tibetan Administration (CTA) hailed the move, calling it a positive change for the relief of Uyghurs in East Turkestan residents, while also expressing the view that the objective of addressing human rights abuses in China would not be complete without a visit to Tibet.

The recent announced and much criticised visit to China by Michelle Bachelet, the UN High Commissioner for Human Rights, therefore poses new questions about her credibility.

While expressing solidarity with the Uighur cause and stressing the need for immediate action, CTA noted that neglecting Tibet in the process will affect the quality of the human rights changes the visit might bring. This is not the first time the UN official has been criticised for her lax approach to the Tibetan issue - many Human Rights defenders also have raised questions about this.

The China Director of Human Rights Watch Sophie Richardson opined, “I think the same problem will apply to Tibetan areas as to the Uyghur regions, meaning that she is incredibly unlikely to be able to travel freely or to be able to talk to people freely without fear of reprisal.” She further remarked, “Without an ambitious and robust agenda to advance human rights in China, Bachelet’s visit risks empowering the abusers, not their victims.”

Kalden Tsomo, the UN Advocacy Officer in the Tibet Bureau in Geneva stated, “We welcome the U.N. high commissioner’s visit to China, including Xinjiang. However, no assessment of human rights violations by China can be completed without a visit to the Tibetan regions.”

Norzin Dolma, Kalon (Minister) for the Department of Information and International Relations, CTA remarked, “We are deeply dismayed by the UN High Commissioner Michelle Bachelet’s lack of responsiveness to our earlier appeal letter and the perceived obscurity surrounding the impending visit thereby contesting the credibility of the Office of High Commission. In contrast with the predecessors, the High Commissioner’s silence on China’s human rights abuses in Tibet is deeply concerning.”

“The High Commissioner must be publicly accountable for the Office of the High Commissioner for Human Rights (OHCHR) observation and assessment of the human rights situation in Tibet and indicate efforts being taken by the office to mitigate the repressive and rapidly deteriorating situation in Tibet. It is more pressing than ever to send the right signal of hope for human rights and freedom in Tibet and other regions being suppressed by China. Therefore, we reiterate our appeal to the UN High Commissioner to ensure that the upcoming visit to the oppressed regions in China must be credible, substantive, and unfettered including a visit to Tibet,” she added.

“China’s invasion, occupation, and misguided policies in Tibet over the years have resulted in severe human rights violations for the Tibetan people on many levels and in different aspects of their lives. Due to the existing repressive atmosphere and an absence of civic space in Tibet, at least 158 known Tibetans have resorted to tragic self-immolation protests calling for more freedom in Tibet and the return of His Holiness the Dalai Lama to Tibet,” CTA said.

Regressive policies that ensure an information blackout, as well as severe travel restrictions under the guise of ‘high altitude’ in Tibet, have already made it tedious to secure any intervention in Tibet. There are increasing reports of self-immolations in protest against policies aimed at destroying the Tibetan language, identity, culture, and religion. At a time when the pressure on the Tibetan population is growing, it's sidelining by the world's largest human rights organisation is disheartening.