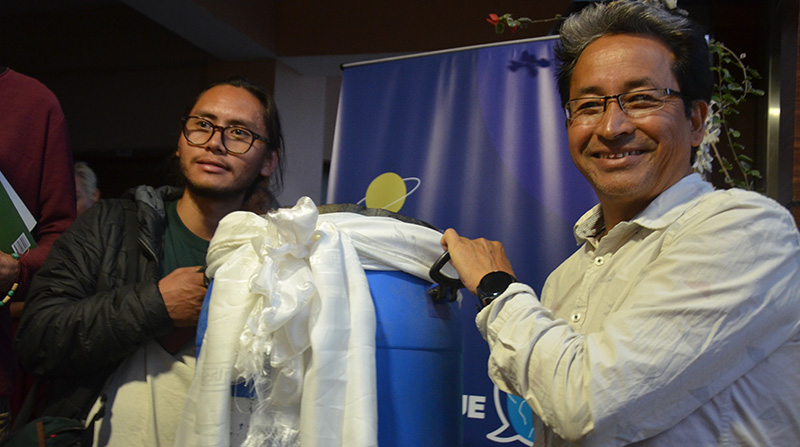 Climate activist Sonam Wangchuk holding a block of ice from Ladakh, to be presented to His Holiness the Dalai Lama. Photo: TPI/Yangchen Dolma

Dharamshala — “Glaciers are melting fast, and it is time to act, Glacier melting represents an urgent call for climate action. We must take some action on climate change before it is too late,” said Sonam Wangchuk, environmentalist and climate activist on Earth Day, April 22, 2022.

The climate mitigation innovator Sonam Wangchuk presented His Holiness the Dalai Lama with a block of ice, on Earth Day, which is taken from a glacier on the Kardungla pass in Ladakh to highlight the urgency of climate change on the Himalayas.

He recounted the experience of presenting a piece of glacial ice from Ladakh to His Holiness the Dalai Lama in the morning. Wangchuk was elated in having two precious pieces of glacial ice and presented it to “perhaps the eldest environmental activist on the planet, His Holiness the Dalai Lama.” He added, “We need the wisdom of the elders, we also need the energy of our younger generation.”

Then he gave one piece of ice to Ms Elizabeth Wathuti, the founder of Green Generation Initiative, as a representative of the younger generation of climate warriors. While thanking everyone, Watuti explained that this is a very symbolic token that conveys the message she will carry as she continues to sound the alarm about the urgency of climate action.

As the video plays on the screen, Wangchuk explains the process of transporting a block of ice from Ladakh to Dharamshala by bicycle and public transport.

Sonam Wangchuk, told the media, “The glaciers are melting, we are seeing early signs of melting glaciers, and we have to live differently, change the way we live, live simply, and give a message to the big cities of the world, "Please live simply so that we in the mountains can live simply.”

“The glaciers are melting, the temperature is rising, the Himalayan mountains are the largest bank of freshwater, after the poles, so we have to take care of it, because almost a billion people depend on it, we are the first victims, then slowly the rest of the world,” the climate activist explained.

“Glaciers are melting fast, and it is time to act, Glacier melting represents an urgent call for climate action. We must take some action on climate change before it is too late,” the activist said.

"In a fragile place like Tibet, I always say that in today's world, people have a say. They have a say through the ballot (right to vote) and the wallet. The wallet is a great voting machine. What you use your money for will be promoted, you can choose not to promote it and things will settle down. So I appeal to the people of the world: do not expect the United Nations to do anything. If you do not want China to do what they are doing to Tibet or their own environment, we must vote against them with our wallets. Do not buy products from such companies, such regimes, such countries that despise nature and are in league with the forces that are melting our glaciers and causing droughts for our farmers," Wangchuk said.