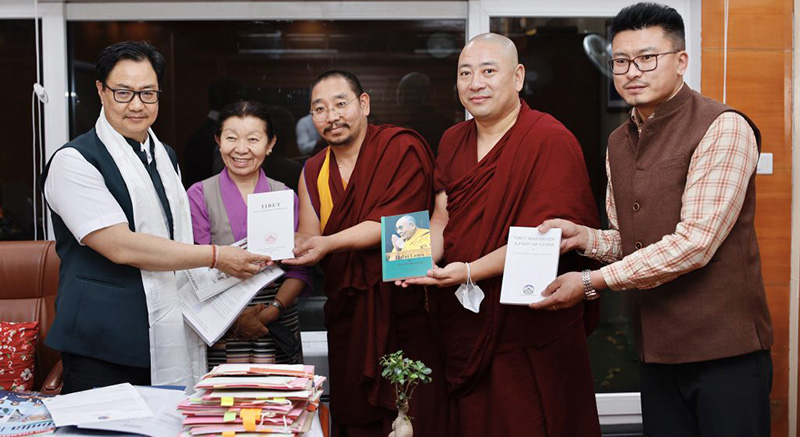 New Delhi — Tibetan parliamentary delegation's advocacy campaign for Tibet concludes on April 9, 2022, in Delhi, after visiting many political and diplomatic dignitaries. The visit covered the headquarters of major political parties in India, 43 lawmakers, and embassies of several countries.

The delegation was led by the Deputy Speaker Dolma Tsering Teykhang and included parliamentarians Tenpa Yarphel, Khenpo Kada Ngedup Sonam, and Phurpa Dorjee Gyaldhong. The purpose of their visit was to draw the attention of the world's diplomats to the gross violations of human rights in Tibet, as well as to the cultural and environmental degradation of Tibet. Originally scheduled for 4-8 April, the visit was extended by two days to maximise its reach and impact. The visit covered the headquarters of the main political parties in India, 43 lawmakers, and the embassies of several countries.

The delegation urged the Indian lawmakers to take a prominent international stand on the atrocities committed by the Chinese government on issues of Tibet's identity, language, and culture. It also welcomed a joint effort by other nations of the world in addressing these issues. The delegation ensured to visit major political parties on different ends of the political spectrum – including the Nationalist Congress Party (NCP), Bhartiya Janata Party (BJP), Samajwadi Party, Communist Party of India (CPI), Janata Dal United (JDU), National People’s Party (NPP), Shiromani Akali Dal (Delhi State), and All India Congress Committee (AICC). In the course of the visit, they also met with Shri Chidambaram Ravi, National Committee Member of CPI, Shri Afaque Ahmed Khan, General Secretary of JDU, Shri Sonelal Kol, National Secretary of NPP, and other officials of different political parties.

Other important issues discussed included the resumption of dialogue between His Holiness the Dalai Lama and the Chinese Communist Party. The need for the UN climate change framework and the UN environment programme to conduct a scientific study on the environment of the Tibetan plateau and its impacts at the macro level, especially when considering China's hydrological hegemony and other policies that have ecological effects. The resolution was passed at the third session of the 17th Tibetan Parliament-in-Exile.