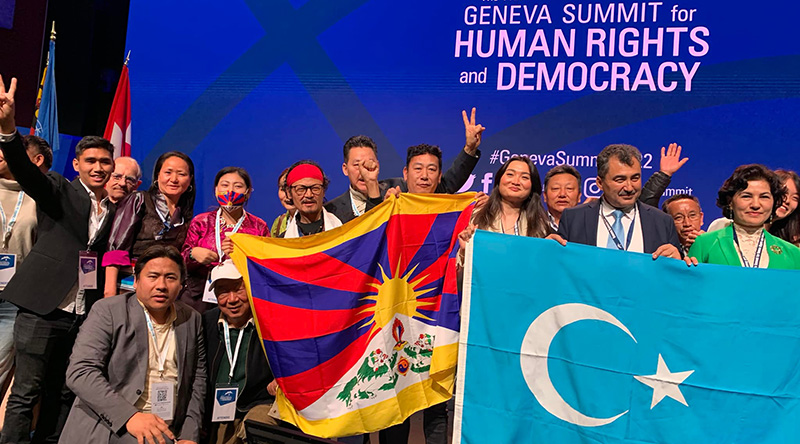 Tibetan activist Tenzin Tsundue and other activists at the Geneva Summit for Human rights and Democracy on April 6, 2022. Photo: file

Geneva — Tibetan poet and activist Tenzin Tsundue spoke at the Geneva Summit for Human rights and Democracy on April 6, 2022 and he said, “Internationally, all the countries that traded with China have benefited from the suffering of Tibetans, Uyghurs, Mongolians, Manchus, Hong Kong, Taiwan and all other countries who are under the influence of China. You have benefited from our suffering. Therefore, you have the duty to work for the human rights of our people.”

Tenzin Tsundue, a Tibetan poet and activist spoke at the Geneva Summit for Human Rights and Democracy on April 6, 2022, as part of his speaking tour. The event, which has attracted worldwide attention for its commitment to speaking out against human rights violations around the world, included a special segment on China entitled "The Struggle for Human Rights in China".

Tenzin Tsundue spoke at a panel discussion that also included Rushan Abbas, founder of the Campaign for Uighurs and sister of a political prisoner in China, and Joey Siu, Policy Advisor at Hong Kong Watch, Advisor to Inter-Parliamentary Alliance on China; moderated by Luke de Pulford, the Founder, and CEO of Arise, an anti-slavery charity.

Tsundue began his speech by unfurling the Tibetan national flag on the stage and then described how the flag had been confiscated the previous day when he tried to take a photo with it in front of all the other flags at the UN headquarters. He gave a historical account of the Tibetan struggle during the Second World War. Tenzin added: "I still believe there is another way. It does not have to be this way. We do not have to be enemies, we don't have to kill each other, we don't have to hate each other."

Remembering his days of imprisonment, Tsundue added, “When I was in prison, I felt there is no hope for me. Because what happens in prison in Tibet is that the Chinese security cuts all relations you have with the outside world. There is no access to your lawyer, there is no sense of schedule that is happening. They will not tell you what is going to happen. I was blindfolded, beaten, tortured, denied food, denied sleep, in order to, what they call ‘break the person’.”

He explained to the audience that the prison system was designed to allow only the thought of basic survival of the individual. He added, “My Buddhist upbringing and the Tibetan culture gave me the inner strength that the real force is not the one who is torturing from outside; the one that is within you – where you believe that there is a higher purpose you have dedicated your life to. For that, you need to empower yourself and that empowerment is not coming from your anger or your hatred, or your desire to revenge. In fact, sympathise with the enemy who is undergoing a period of weakness from hating you.”

The activist added that 60 percent of China’s landmass is the occupied region and that he is more worried about the Chinese population being oppressed by their own government. “No democracy and freedom in China, China is the biggest dictatorship in the world. Unfortunately, the international community and governments support China because they do business with it," he said. He urged the world not to put trade before peace.”

He also said, “One of the things that I bring forward as a Tibetan is that do not suffer. Take this as a pride to work for freedom and human rights and believe that this is the right thing to do and find joy in this. I will tell you what – the enemy will then start to feel insecure.”

The moderator later asked Tsundue what he felt about the passivity of world leaders and what message he would want to give them. Tsundue replied, “China has in certain ways, created a narrative where China has not only colonised these occupied countries ever since 1949, China is now going back into history. China is colonising history.”

Tenzin Tsundue will continue his advocacy talks throughout this month in different parts of Europe, such as Norway and Denmark, before returning to India on April 29, 2022.