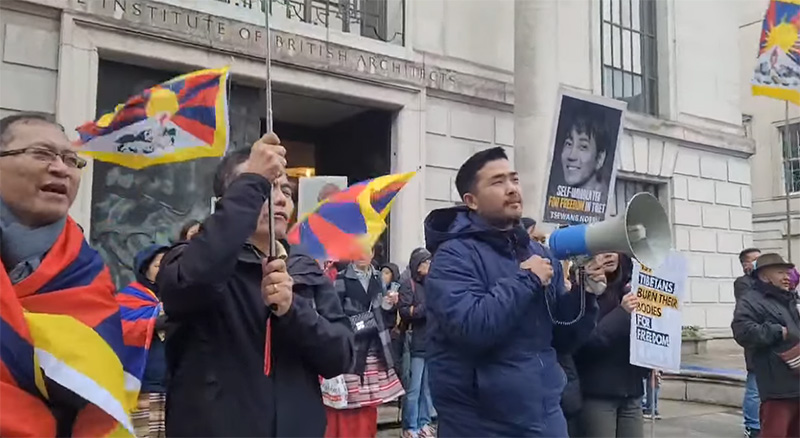 London — Tibetans in the UK and Canada held candlelight vigils for the latest self-immolators, Tsewang Norbu and Taphun, and protested against the Chinese government's repressive policies in Tibet that have led to the self-immolations.

On April 6, 2022, more than 30 Tibetans in London, held a candlelight vigil for the latest self-immolators, Tsewang Norbu and Taphun, who self-immolated in protest against the Chinese government’s hardline policies in Tibet. They also protested outside the Chinese Embassy in London and shouted at China: "Shame on the Chinese Communist Party, Free Tibet now, China lies, people die, 159 Tibetans burn themselves for the freedom of Tibet".

The famous 25-year-old singer Tsewang Norbu set himself on fire in front of the Potala Palace in Lhasa, the capital of Tibet, on February 25, 2022, to protest against the Chinese government's repressive policies in Tibet. He passed away in a Hospital in Lhasa in first week of March, 2022.

Tsewang was born on October 9, 1996, in Nagqu, Centre-easternTibet. His father called Choekun, a musician, and his mother, called Sonam Wangmo, was a popular Tibetan singer. He studied and grew up in Nagqu. As a child, he watched his father, Choekun, make music, and he began to fall in love with music and sing modern, ethnic, pop, and traditional songs, as well as composing songs. He was a pop singer from Tibet and graduated from Tibet University in Lhasa, Tibet.

Taphun self-immolated in front of a Chinese police station located near Kirti monastery in protest against the Chinese government’s repressive policies and inhuman treatment of Tibetans in Tibet on March 27, 2022. On his 80th birthday last year, Taphun had said, “It is certain that the sun of happiness will shine over Tibet due to the blessings of His Holiness the Dalai Lama. Young Tibetans should not lose heart!"

Taphun was a resident of the nomadic village of Meruma, Ngaba County (Ch: Aba Prefecture, Sichuan Province), in Eastern Tibet. He has always denounced China government’s repressive policies and mistreatment of Tibetans inside Tibet.

They held the CCP responsible not only for the oppression that led to these deaths, but also for its role in spreading lies and falsified accounts of the circumstances of the deaths. “The fact that the CCP does not try to resolve these problems but instead resorts to lying about these self-immolations; trying to cover them up or claim that Tibetans just had an accident or even in some cases that the self-immolation protests were just a result of inside domestic disputes, really shows the state of denial that the CCP cage us in and the ridiculous lies they expect us to believe”, the protestors said.

They made it clear that the protest was in no way a glorification of self-immolation, but was intended to underline the fact that it is the last resort of protest of an oppressed population. They added that even today, the full information regarding these deaths has not come out due to the excessive controls imposed by Chinese government.

Tibetans in Toronto, Canada organised protests outside of the Chinese Consulate and Dundas Square in Toronto, Canada. The protestors were seen carrying the Tibetan national flag and handing out posters with the details of self-immolators, mentioning that there were 170 such self-immolators. The protestors engaged with the passers-by and offered them information about Tibet. The posters contained information about the first Tibetan to self-immolate as a protest against China in 1998, Thupten Ngodup and also about the latest protestors who self-immolated in 2022 like Taphun.

While the Chinese government actively tries to portray the self-immolations as deaths unrelated to the Tibetan movement, these protests highlight the link between the two by pointing out facts related to the deaths, such as the locations chosen for the self-immolation - a Chinese police station in the case of Taphun and the Potala Palace in the case of Tsewang Norbu. The Tibetan demonstrators in Toronto remembered those who self-immolated and paid tribute to their sacrifice which gave momentum to the movement for a free Tibet.