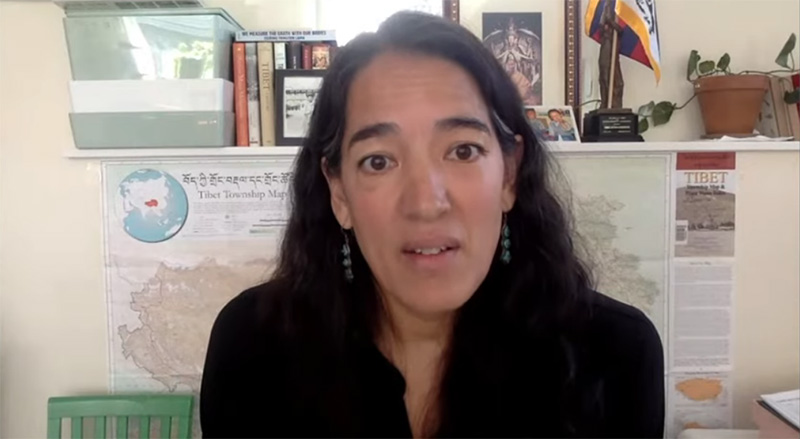 Lhadon Tethong, activist and the Director of Tibet Action,

Washington, D.C. – Congressional-Executive Commission on China, held a hearing on Growing Constraints on Language and Ethnic Identity in China today, on April 5, 2022. During the testimony, Lhadon Tethong said, “the Chinese authorities have been constructing a massive colonial boarding school system, that threatens the future survival of the Tibetan people and nation.”

Lhadon Tethong, activist and the Director of Tibet Action, Lhadon Tethong spoke at a US Congressional hearing on China's Colonial Boarding School in Tibet and the assault on Tibetan identity and way of life on Tuesday, April 5, 2022.

Director Lhadon Tethong began her testimony by remarking, “As a Tibetan who has been working on the Sino – Tibetan conflict for more than two decades, I can say safely, it takes a lot to shock me. But last year, when my colleagues and I began research into reports that Tibetan children were being sent to state-run boarding schools at an alarmingly high rate, we were stunned by what we found. Under the cover of darkness of China’s near total information blackout of Tibet, the Chinese authorities have been constructing a massive colonial boarding school system, that threatens the future survival of the Tibetan people and nation.”

She testified that “these residential schools were the cornerstone of a broader effort to wipe out Tibetan resistance by eliminating the three pillars of Tibetan identity – language, religion, and way of life.”

She further added that these schools were effectively stealing the Tibetan identity and replacing it with Chinese identity. It had been found by them that at least 800,000 to 900,000 children, which is approximately 80 percent of Tibetan children are being sent to these schools, stripped away from their parents. They are not allowed to study their culture or language as well as practice their religion. China’s shut down of other alternatives and severe penalisation leave parents no choice but to send their kids away. She also recounted the anecdote of a Tibetan who detailed the trauma that this separation brings to these children.

“China’s colonial bodies together with policies that severely restrict the use of Tibetan language that seek to hollow out Buddhism and end the nomadic way of life threaten Tibetan existence in every space in Tibet. What is happening in front of our eyes is the annihilation of Tibet as a civilisation, as an identity, as a culture. It is cultural genocide and Tibetans everywhere know it,” Lhadon said.

She recounted the case of 25-year-old Tsewang Norbu, the Tibetan pop star who self-immolated on the eve of the anniversary of the 1959 Tibetan uprising as a sacrifice and message to the Tibetan struggle. She said this proved Tibetan’s allegiance to Tibet over the generations. She ended her testimony by asking the world community to support the struggle of Tibetans to break free of Chinese control.

A question posed during the hearing was regarding the role of global leaders in challenging these human rights violations. To which, Lhadon replied, “I think the key is for the like-minded governments and global leaders to work together and to coordinate strategies and approaches in a way that really targets them- like for example, in the case of sanctions. Unlike targeting military or security people, the area of education policy seems like such a different target.” She suggested that the experts who create such divisive policies must be targeted for sanctions – as academics are worried about their reputation just as nations are.

The activist was further asked if she can see a path whereby the Chinese government intends to destroy the Tibetan language with another generation. She responded, “the focus now on kindergarteners and pre-schoolers, the focus now on four- or five-year-olds really shows us that these children are learning from a young age entirely in Chinese or Mandarin and they are so young. They are being taught so that their psychological foundation will be trained to think about Chinese culture. Their idea is to really change them on the inside – who they are fundamentally, so as to wipe out resistance.”

She agreed with Mr Togochong’s claim that this is a cultural genocide admitting the similarities with struggles in Mongolia etc. She criticised the megalomanic nature of the Chinese government that seeks to control their borders and their soft-sounding propaganda that attempts to mask their blatant violations.

“The Chinese government is making it impossible for Tibetan parents to do anything but comply both because of the consolidation of schools and closing all the local schools, all the alternatives…so they have to send their children away. At the same time, parents of course resist and when they do, they are threatened.” Because of the constraints on Tibetan parents, she requested the world and everyone to ask questions to China. She said that the parents try to be near their kids and that’s about all they can do – so the burden falls on the world to question China on this atrocity.

Other witnesses agreed to these accounts and the gathering concluded with a resolve to fight for language rights which underpins a larger section of freedoms for these oppressed groups.