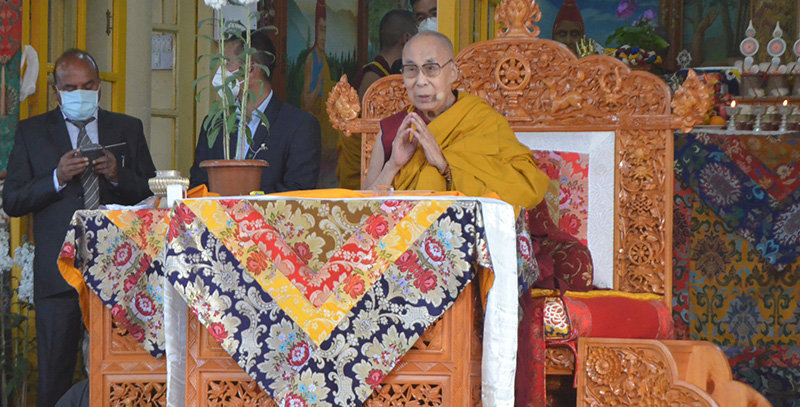 His Holiness the Dalai Lama spoke about his early days in India and his move from Mussori to Dharamshala with the Tibetan people. He recounted his life from 1960 and thanked the local officials for their work and commitment. “In different places, you see many people greeting. But here, it is not a week, not a month, but years. So, I really appreciate (the local officers). Now, I take this opportunity and want to thank them,” the spiritual of Tibet said.

"Basically, I believe that seven billion human beings are the same human brothers and sisters. Wherever I go - in the West or in the East, I always consider that we are the same. Two eyes, one nose and one mouth - it is the same. If I meet someone with a third eye, then I feel different. Otherwise, all seven billion people are the same. In India, where the Tibetan culture is actually an ancient Indian culture. I consider Indians to be historically our gurus. We have learned from India. We are chela (students) of India. He added jokingly, "Today, if I may say so, the chela has more knowledge."

"India should combine the modern education and technology of the West with the ancient Indian knowledge of how to develop peace of mind. The West focuses on a kind of materialistic thinking, whereas India has been focusing on peace of mind on the basis of karuna and ahimsa for thousands of years. Today there is an opportunity for India, because more and more Westerners are interested in Indian philosophy and tradition, especially in the mind and emotions; some scientists are also interested in the ancient Indian tradition of the mind - how to keep peace of mind, how to reduce anger and jealousy,” His Holiness added.

When His Holiness asked how one can find the purpose of life and make it more meaningful. In his reply, the spiritual leader said: "Obviously, even grass and flowers survive and flourish. Even more, other animals, from the beginning, desire to survive. Now we human beings have this very sophisticated human brain. So we have the ability to think right away. Like Buddha, many great spiritual masters think of the whole of humanity - unlike politicians who think only of "my community, my land" - spiritual leaders speak of the whole of sentient beings or at least the whole of humanity. Today, India can really make a significant contribution. I think in the last century Mahatma Gandhiji really spread ahimsa on this planet. The basis of ahimsa is karuna and the time has come to make an effort to promote karuna - ahimsa will come automatically. It is not necessarily a religious matter. It is the Indian secular thought - whether you believe in religion or not - we want peace, we want progress. War and violence are destructive. Peace is the only way to create a happy human society,” the Nobel laureate said.

The next question was what is happiness. His Holiness was quick to reply, "I think of peace of mind. If you have a good house, good food, and good companions but a lot of anxiety, a lot of anger, you will not be happy."

"I believe that, fundamentally, humans are more compassionate. The few months in the womb - if the mother's mental state is relaxed, then the unborn child will have a very good effect. But if the mother is constantly in fear and anger, it will be harmful. After birth, for a few years, we are totally dependent on the kindness of our mother. This is how our life begins. Now this feeling should last until we die. One should be more compassionate and extend the kindness of one's own mother.”

His Holiness added that human society cannot survive with only one person and that we need to work together, regardless of differences in race, nationality, etc. "We should be united in being human, if we think about it seriously, then you will not think about weapons anymore." He stressed again the demilitarisation and waste of arms.

“Any work on human land should have karuna and any action should have ahimsa. Weapons and use of power are old thinking. The modern time is a civilised world – so any sort of disagreement should be dealt through talk or dialogue.” He added that a country or race centred approach is old and we should adopt a humanistic approach to life. The common humanity has to become the most important aspect.

“As a political refugee, if I keep thinking that this is not Tibet, I will be uncomfortable. But this is a human land – the difference of country or religion is secondary.” He added, “When we were born, there was no difference – Christian or Muslim or Hindu or Buddhism– all are same. So, we have to think that their life began the same and at the time of death, they are the same; between that, too much distinction is useless.”

He concluded by saying that this broad thinking is much better and that we should not focus so much on identity divisions - instead, everyone should focus on our commonalities.